What is Vitamin B1 - Thiamin

Vitamin B1, also called thiamine, is one of eight water-soluble B vitamins. All B vitamins help the body to convert carbohydrates into glucose (sugar), which is "burned" to produce energy. These B vitamins, often referred to as B complex vitamins, are essential in the breakdown of fats and protein. B complex vitamins also play an important role in maintaining muscle tone along the wall of the digestive tract and promoting the health of the nervous system, skin, hair, eyes, mouth, and liver.
Similar to some other B complex vitamins, thiamine is considered an "anti-stress" vitamin because it is believed to enhance the activity of the immune system and improve the body's ability to withstand stressful conditions.

Where do we find Thiamine?

Thiamin deficiency may result from inadequate thiamin intake, an increased requirement for thiamin, excessive loss of thiamin from the body, consumption of anti-thiamin factors in food, or a combination of factors.
Thiamine deficiency is rare, but tends to occur in people who get most of their calories from sugar or alcohol. Individuals with thiamine deficiency have difficulty digesting carbohydrates. As a result, a substance called pyruvic acid builds up in the bloodstream, causing a loss of mental alertness, difficulty breathing, and heart damage. In general, thiamine supplements are primarily used to treat this deficiency known as beriberi.

People with beriberi have difficulty standing, walking, and controlling their muscles. This disease was common in the 1800s in Southeast Asian countries when people started eating white “polished” rice instead of brown rice. Removing the outer husks of rice removes most of the thiamine. It’s very easy to get enough thiamine in the diet these days because it’s added to processed grains. However, people who abuse alcohol or have a very poor diet may suffer from a Thiamin deficiency.

How can we get enough Thiamin?

The best sources of thiamin are enriched, fortified, or whole-grain breads and cereals. Thiamin is one of four vitamins added to enriched grain products. Look for the word “thiamin” in the ingredient list on the label to see if it has been added. Other good sources of thiamin are legumes (beans and lentils), orange juice and sunflower seeds.

It is thought that thiamin can be useful for motion sickness in air and sea travel, and that this vitamin also repels insects when excreted through the skin.
Some scientists have speculated that thiamine may have some benefit in treating Alzheimer's disease. This theory is based on the effects that this nutrient has on the brain and the symptoms that people develop when deficient in thiamine.

Most people get plenty of thiamin in their diet, so supplements are usually not needed.  Research has not yet found problems from consuming too much thiamin from food or supplements. However, there is no need to take a supplement with more than 100 to 150% of the Daily Value for thiamin.  Only take a supplement if directed to do so by your DBM Physician.  If you are eating a Whole Food Plant-Based Diet, Eating From The Rainbow and paying attention to the quantities required from each of The Four Food Groups - your diet should be more than adequate.  Visit the Daily Nutrition Page to find out more.

Take a look at the charts on High Vitamin B1 Foods on the next page and make sure that you include some of these foods when putting together an eating plan to ensure you gain sufficient intake of this valuable vitamin. 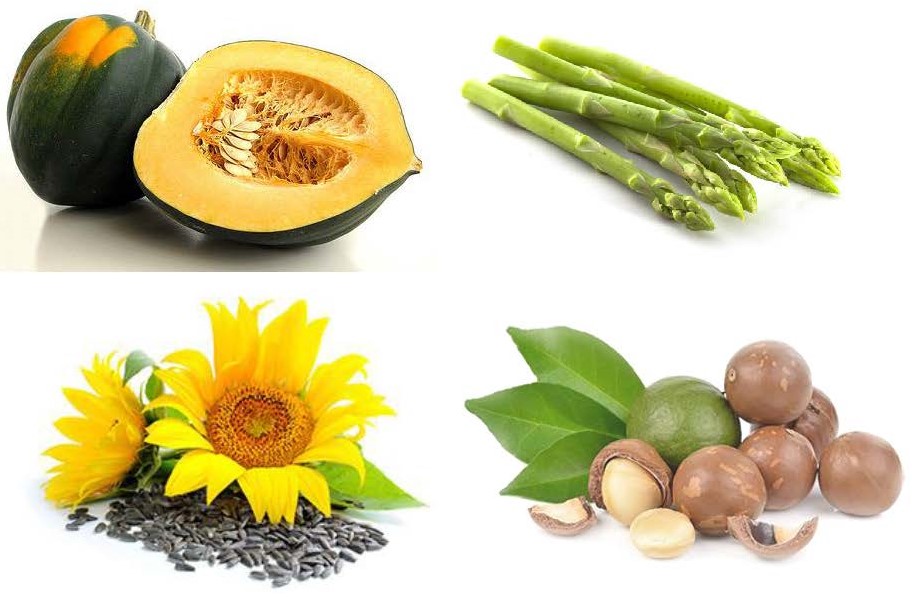 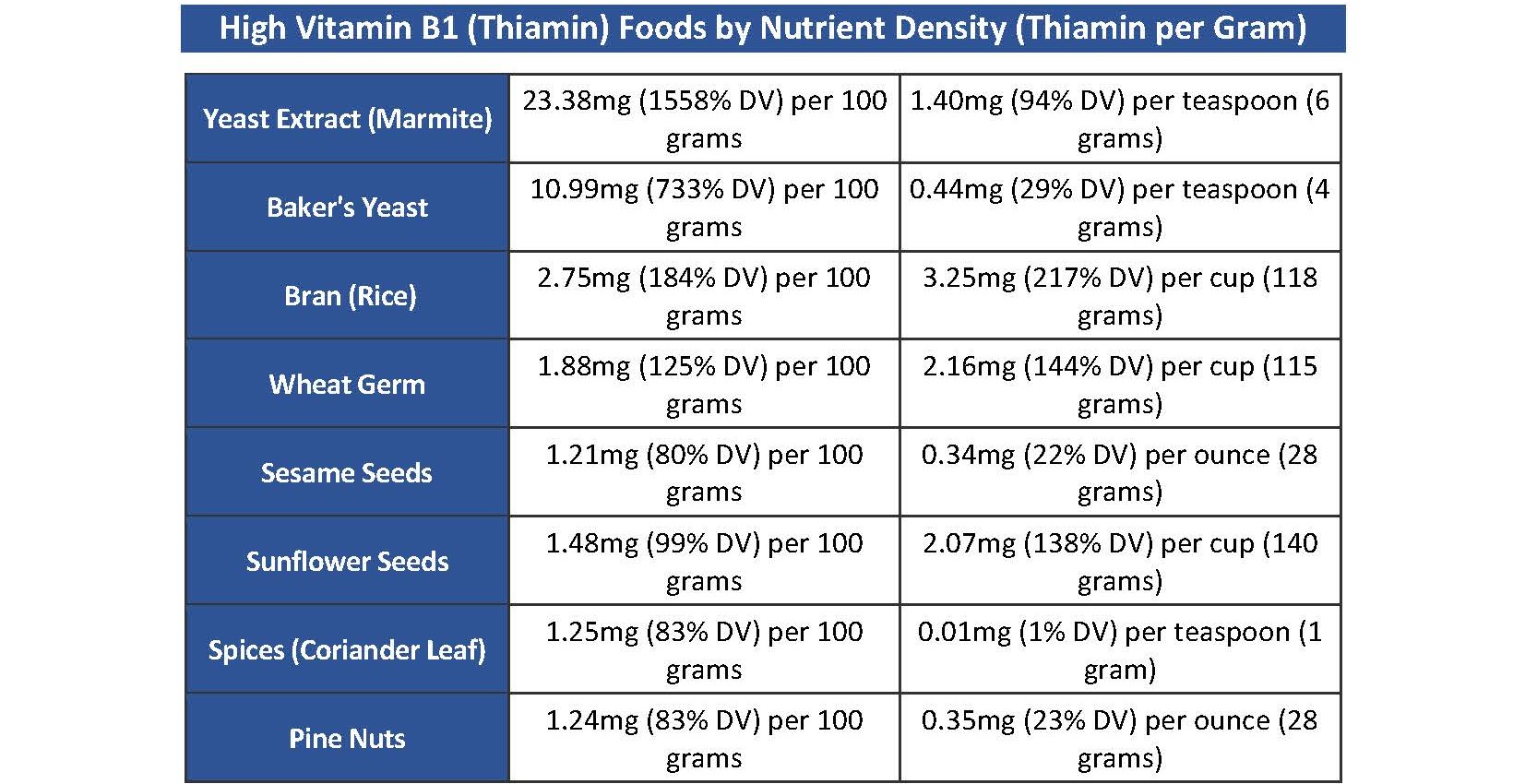 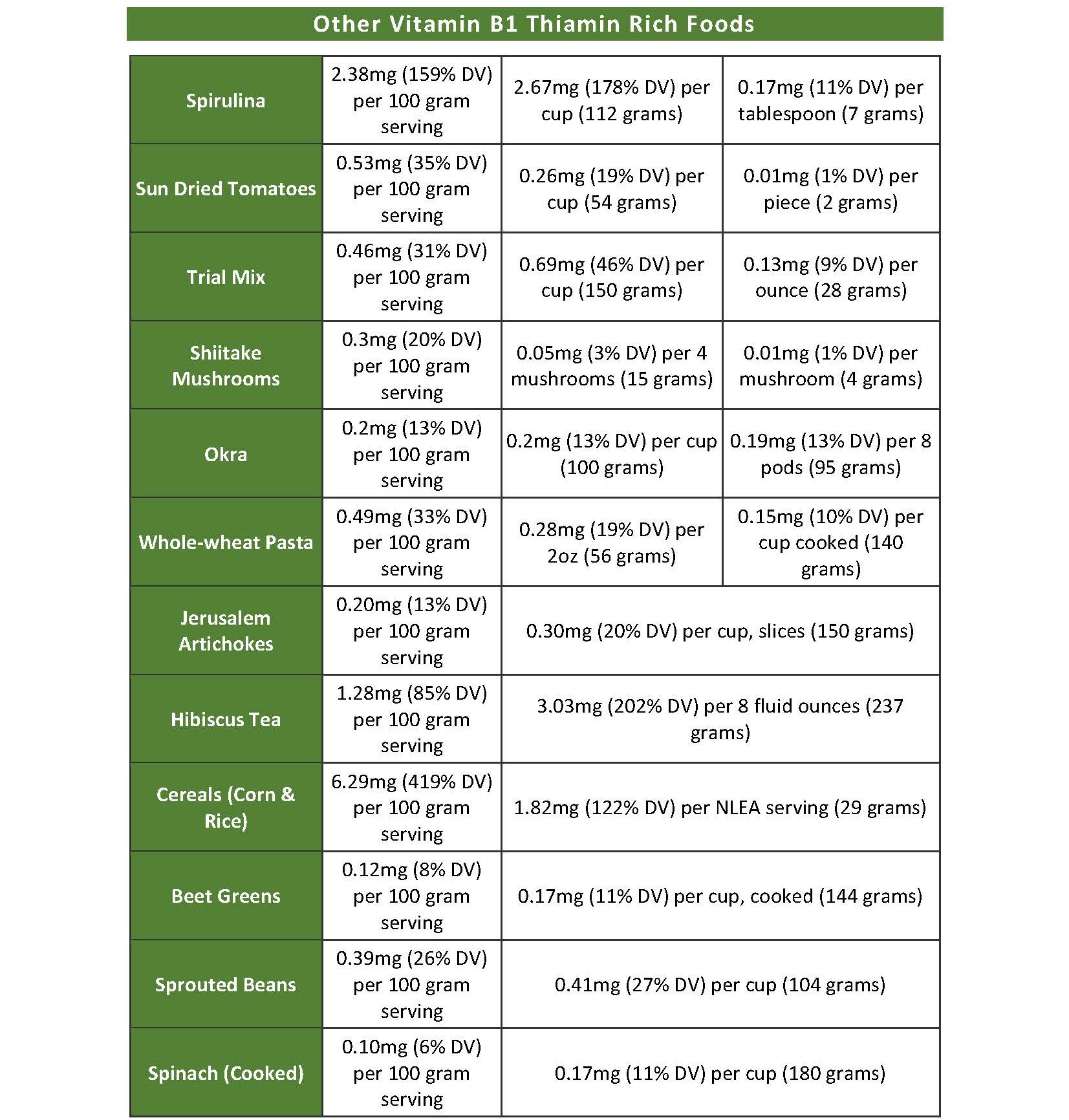