Wheat is a staple food worldwide, this much we know. We also know some people are intolerant to wheat due to gluten allergies. For those tolerant, wheat contains a good amount of amino acids, including T. In conclusion, wheat contains 0.011 grams per ounce.

Pumpkin is one of the most widely grown foods in the world. Pumpkin, which is technically a fruit, is incredibly rich in vital antioxidants and vitamins. Yet another good source of T, pumpkin contains 0.04 grams per ounce.

Walnuts are delicious nuts thought to increase intellectuality… Cool! Walnuts are richer than most all nuts in polyunsaturated fats. The most abundant being an Omega-6 fatty acid called linoleic acid. Walnuts also contain a relatively high % of the healthy Omega-3 fat, alpha-linolenic acid (ALA). Most of all, the health benefits of walnuts include reduction in bad cholesterol, improvement in metabolism, and control of diabetes. As for intellectuality, the high amount of T may be responsible; walnuts contain 0.10 grams per ounce.

With so many applications, it’s no wonder cucumbers are the 4th most cultivated vegetable in the world. A superfood, cucumbers are an excellent source of molybdenum and vitamin K. They are also a good source of vitamin C, potassium, and magnesium. Oh, and ladies, cucumbers contain silica, the nail health-promoting mineral! The amount of T is slightly low; an estimated 0.001 grams per ounce.
Mushroom

Did you know, when exposed to light, mushrooms produce vitamin D? Just like human beings! A variety of mushrooms also contain selenium, which is good for our livers. Moreover, mushrooms boost our immune systems, they’re high in antioxidants, and contain loads of vitamin B2 and B3. Mushrooms typically contain 0.0025 grams per ounce… Low, but still a good source.

Leafy greens (or leafy green vegetables) are famous for their antioxidant and anticancer properties. For example, they’re low in fat, high in fiber, and rich in vitamin C and phytochemicals. What does this mean? Leafy greens can reduce the risk of cancer and heart disease… Yes! In addition, they’re also a good source of T; spinach contains 0.008 grams per ounce.

Tomatoes are treasures of riches when it comes to their nutritive and antioxidant benefits. For example, tomatoes are an excellent source vitamin C and K. As well, tomatoes are a very good source of dietary fiber, vitamin A and E. Tomatoes are also enriched in terms of T, as it contains 0.001 grams per ounce.

When it comes to mental health and sleep, tryptophan really is a miracle substance. Studies show tryptophan supplements have numerous benefits, including relieving:

The reason tryptophan is so powerful is because the body uses it to make serotonin, our “happy hormone” which regulates mood. Because some serotonin gets converted into melatonin, it is also associated with helping sleep. It is impossible to supplement with serotonin itself (even antidepressants don’t boost serotonin production levels; they just prevent serotonin from being absorbed so its effects last longer). You can, however, take tryptophan in order to naturally boost serotonin levels. Some of that serotonin is then used to make melatonin, which helps regulate sleep.

Getting the Benefits of Tryptophan

But what about all those hyped-up claims that turkey helps you sleep? The real reason people feel sleepy after Thanksgiving probably has nothing to do with turkey and tryptophan, but rather because they ate too much. When you eat a lot of carbs (especially sugary ones like dessert), it produces a surge of serotonin in the brain which can make you feel happy and sleepy. Plus, your body has to use a lot of energy to digest all of those calories you consumed, which puts you into a coma-like stupor. Consider that the average Thanksgiving dinner has 4,500 calories. That is a lot for your body to digest!

In reality, when you eat tryptophan foods, most of that tryptophan is getting incorporated into tissue proteins or converted into other substances like niacin (source). Tryptophan from foods simply isn’t very good at getting to our brains.

How to Get More Tryptophan from Food

When you eat carbs, your body produces insulin. Insulin causes some amino acids to be absorbed into tissues, but it doesn’t have much of an effect on tryptophan. As a result of the insulin, there are fewer competing amino acids and more tryptophan from foods can get to the brain. The American Nutrition Association points to numerous studies which show that eating tryptophan foods as part of a low-protein high-carb diet can improve mood and sleep (vegetarians seem to have an edge here). There are also some cofactors which can help convert tryptophan into serotonin.

Finally, we now know that cytokines degrade tryptophan. Cytokines are pro-inflammatory proteins involved in the immune response.   They are released when we are sick, and also in response to certain foods, like saturated fats and trans fats.   There are some proven ways to reduce cytokine levels, including getting more Omega 3, eating antioxidant-rich foods, reducing saturated fat intake, and getting more fiber. Again, vegetarians seem to have an edge here. This might be another reason vegetarianism is linked to better mood.

Simply eating foods high in tryptophan isn’t going to help mood or sleep. To get the most of tryptophan from food, you need to:

A tryptophan supplement isn’t going to compensate for poor lifestyle, like your junk-food diet, lack of exercise, or the fact that you spend the 3 hours before going to sleep on the couch watching a marathon of Game of Thrones.   But, if you really think you need an extra boost of serotonin and help falling asleep, then tryptophan supplements might be an option.

In South Africa, tryptophan is no longer available OTC, BUT it is still DBMs preference to obtain tryptophan through NATURAL SOURCES, so take a look at the tables alongside: 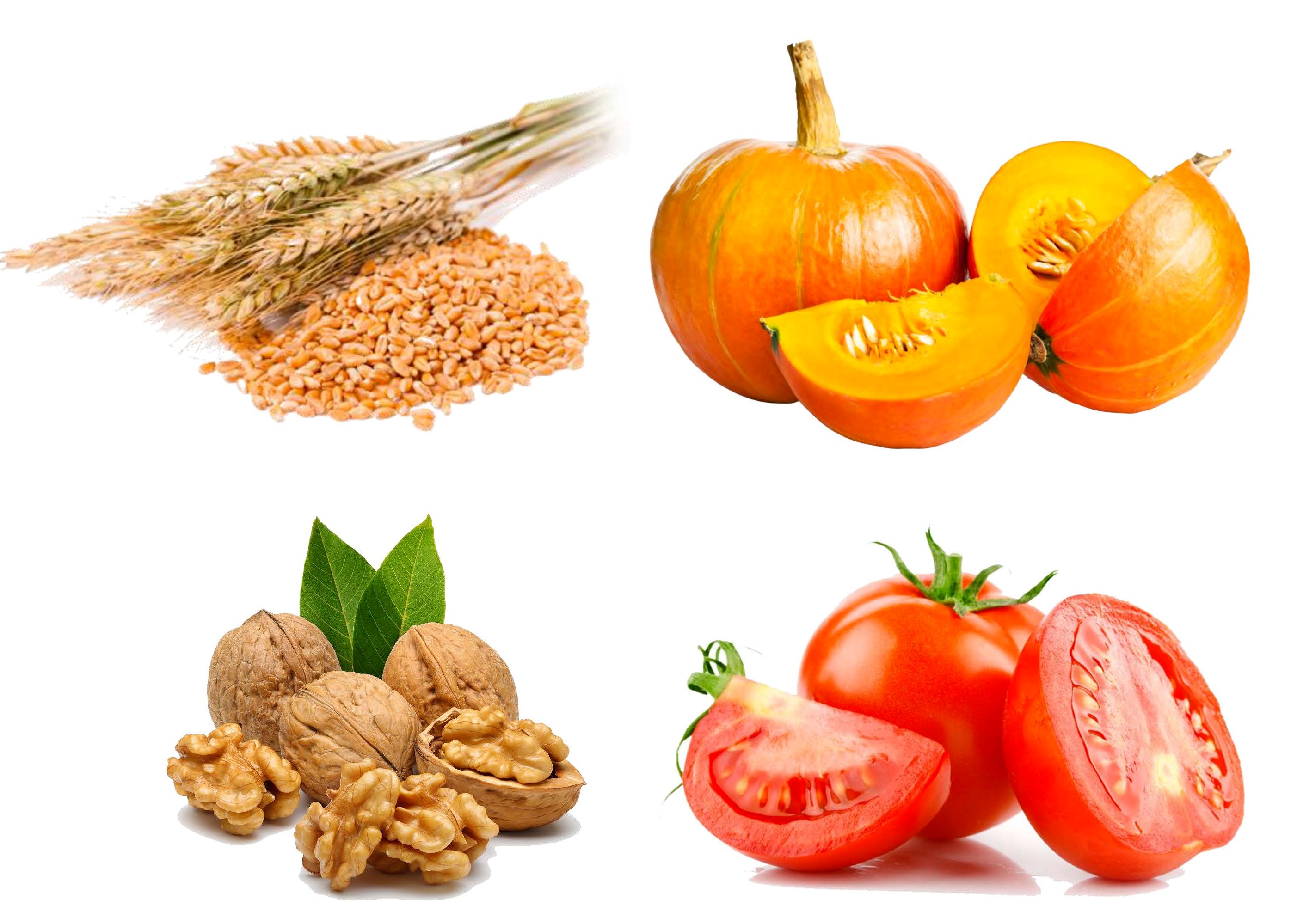 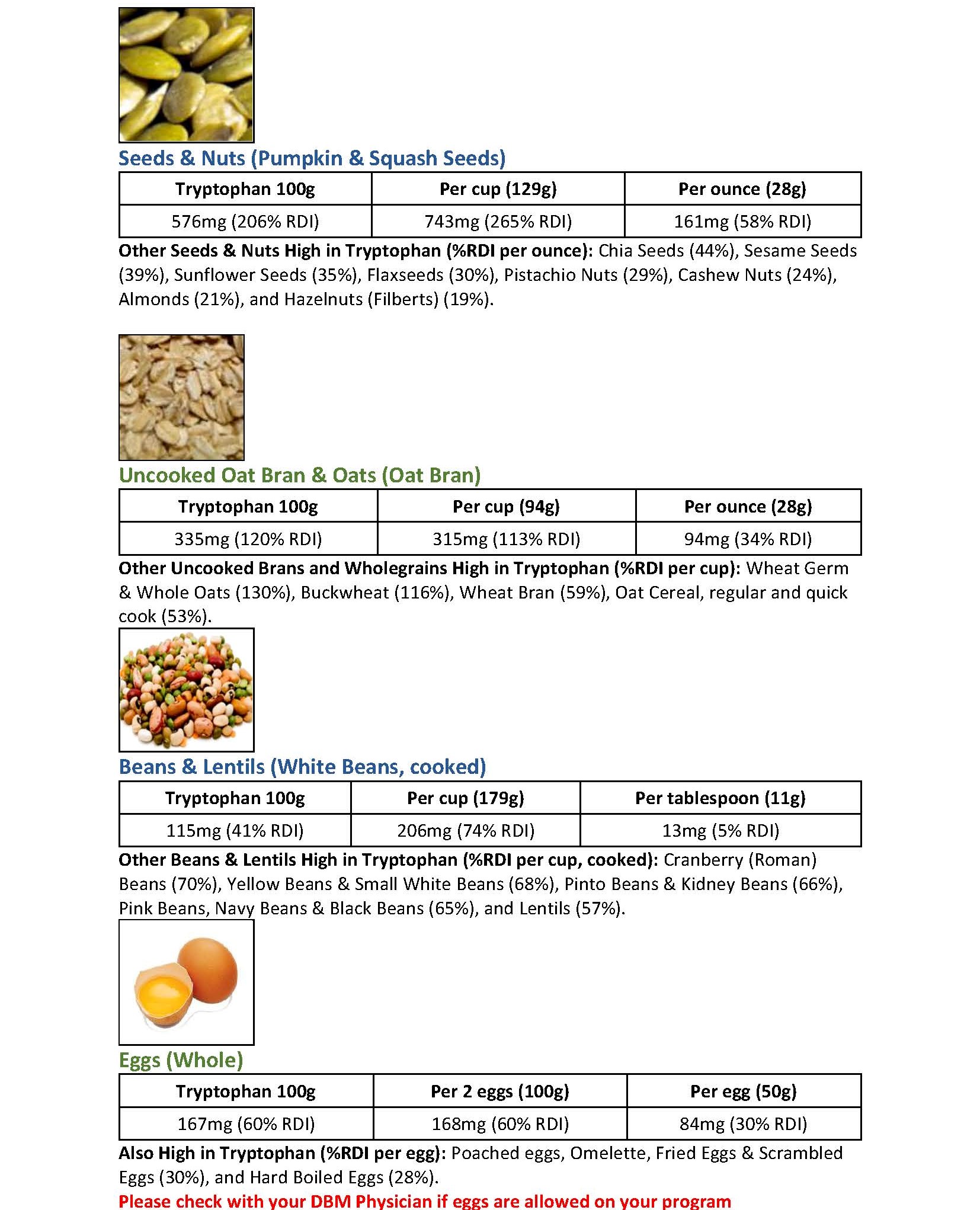