With the new ultra-sensitive, high resolution digital infrared cameras available today a technology that has been developing over the past 20 years is creating renewed interest.

Canadian researchers recently found that infrared imaging of breast cancers could detect minute temperature variations related to blood flow and demonstrate abnormal patterns associated with the progression of tumours. These images or thermograms of the breast were positive for 83% of breast cancers compared to 61% for clinical breast examination alone and 84% for mammography.

Thermography as a physiologic test, demonstrates heat patterns that are strongly indicative of breast abnormality, the test can detect subtle changes in breast temperature that indicate a variety of breast diseases and abnormalities and once abnormal heat patterns are detected in the breast, follow-up procedures including mammography are necessary to rule out or properly diagnose cancer and a host of other breast diseases such as fibrocystic syndrome, Pagets disease, etc. 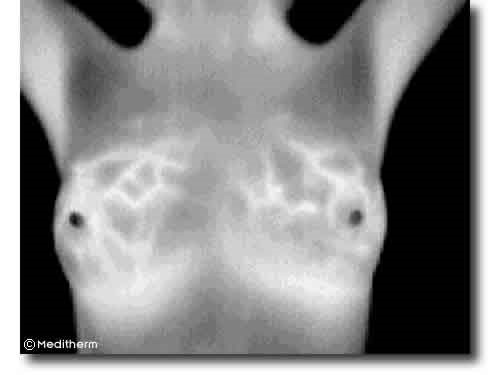 By performing thermography years before conventional mammography, a selected patient population at risk can be monitored more carefully, and then by accurately utilize ultrasound as soon as is possible to detect the actual lesion - (once it has grown large enough and dense enough to be seen on mammographic film), can increase the patients’ treatment options and ultimately improve the outcome.

It is in this role that thermography provides its most practical benefit to the general public and to the medical profession. It is certainly an adjunct to the appropriate usage other diagnostic screening and not a competitor.

Thermography, with its non-radiation, non-contact and low-cost basis has been clearly demonstrated to be a valuable and safe early risk marker of breast pathology, and an excellent case management tool for the ongoing monitoring and treatment of breast disease when used under carefully controlled clinical protocols.

Medical DITI is a non-invasive adjunctive diagnostic technique that allows the examiner to visualise and quantify changes in skin surface temperature.  An infrared scanning device is used to convert infrared radiation emitted from the skin surface into electrical impulses that are visualised in colour on a monitor. This visual image graphically maps the body temperature and is referred to as a thermogram. The spectrum of colours indicate an increase or decrease in the amount of infrared radiation being emitted from the body surface. Since there is a high degree of thermal symmetry in the normal body, subtle abnormal temperature asymmetry's can be easily identified.

Medical DITI's major clinical value is in its high sensitivity to pathology in the vascular, muscular, neural and skeletal systems and as such can contribute to the pathogenesis and diagnosis made by the clinician.

Medical DITI has been used extensively in human medicine in the U.S.A., Europe and Asia for the past 20 years. Until now, cumbersome equipment has hampered its diagnostic and economic viability. Current state of the art PC based IR technology designed specifically for clinical application has changed all this.

Clinical uses for DITI include

Skin blood flow is under the control of the sympathetic nervous system. In normal people there is a symmetrical dermal pattern which is consistent and reproducible for any individual. This is recorded in precise detail with a temperature sensitivity of 0.01°C by DITI.

The mean temperature differential in peripheral nerve injury is 1.5°C. In sympathetic dysfunction's (RSD / SMP / CRPS) temperature differentials ranging from 1° C to 10° C depending on severity are not uncommon. Rheumatological processes generally appear as 'hot areas' with increased temperature patterns. The pathology is generally an inflammatory process, i.e. synovitis of joints and tendon sheaths, epicondylitis, capsular and muscle injuries, etc.

Both hot and cold responses may co-exist if the pain associated with an inflammatory focus excites an increase in sympathetic activity. Also, vascular conditions are readily demonstrated by DITI including Raynaud’s, Vasculitis, Limb Ischemia, DVT, etc.

DII As a Risk Marker For Breast Cancer

Studies show that an abnormal infrared image is the single most important marker of high risk for developing breast cancer, 10 times more significant than a family history of the disease (5). Consequently, in patients with a persistent abnormal thermogram, the examination results become a marker of higher future cancer risk (4,5). Depending upon certain factors, re-examinations are performed at appropriate intervals to monitor the breasts. This gives a woman time to take a pro-active approach by working with her doctor to improve her breast health. By maintaining close monitoring of her breast health with infrared imaging, self-breast exams, clinical examinations, mammography, and other tests, a woman has a much better chance of detecting cancer at its earliest stage and preventing invasive tumour growth.

Angiogenesis, or new blood vessel formation, is necessary to sustain the growth of a tumour. Digital Infrared Imaging may be the first signal that such a possibility is developing (3).

Just as unique as a fingerprint, each patient has a particular infrared map of their breasts. Any modification of this infrared map on serial imaging (images taken over months to years) may constitute an early sign of an abnormality. However, if a pathology is suspected, this information is used to recommend further examinations and tests.

Breast cancer is the most common cancer in women, and the risk increases with age (1). Risk is also higher in women whose close relatives have had the disease. Women without children, and those who have had their first child after age 30, also seem to be at higher risk. However, every woman is at risk of developing breast cancer. Current research indicates that 1 in every 8 women in the US will get breast cancer in their lifetime (1).

DII’s ability to detect thermal signs that may suggest a pre-cancerous state of the breast, or signs of cancer at an extremely early stage, lies in its unique capability of monitoring the temperature variations produced by the earliest changes in tissue physiology (function) (3,6,7,8,9). However, DII does not have the ability to pinpoint the location of a tumour nor can it detect 100% of all cancers. Consequently, Digital Infrared Imaging’s role is in addition (an adjunct) to mammography and physical examination, not in lieu of. DII does not replace mammography and mammography does not replace DII, the tests complement each other. Since it has been determined that 1 in 8 women will get breast cancer, we must use every means possible to detect cancers when there is the greatest chance for survival. Proper use of breast self-exams, physician exams, DII, and mammography together provide the earliest detection system available to date (3,7,8,9). If treated in the earliest stages, cure rates greater than 95% are possible (3,6). 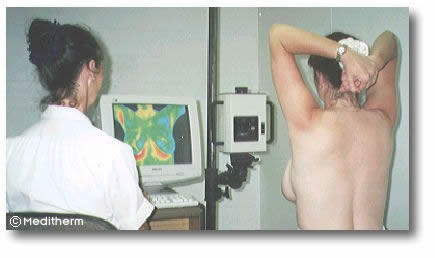 Thermography is a painless, non-invasive, state of the art clinical test without any exposure to radiation and is used as part of an early detection program which gives women of all ages the opportunity to increase their chances of detecting breast disease at an early stage. It is particularly useful for women under 50 where mammography is less effective. 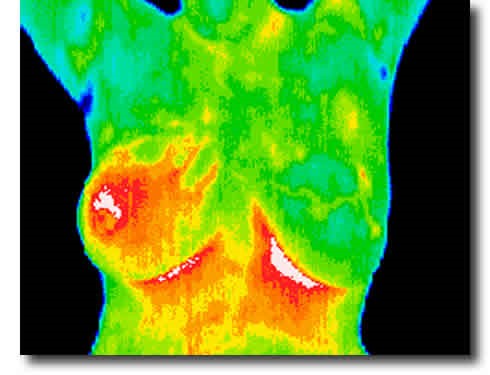 Information for Thermography sourced from http://www.meditherm.com/contact.htm with their kind permission. 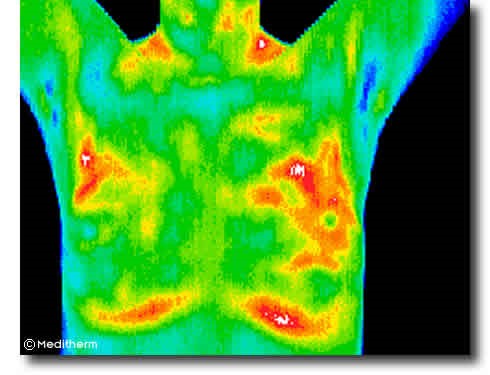