The elements we are composed of (plus or minus a few billion) are components of approximately 60 trillion cells. An average cell contains about 1 quadrillion molecules, which is about 10,000 times as many molecules as the milky way has stars. Individual cells when properly nourished, are capable of producing many of their own amino acids, enzymes, and other factors necessary for all metabolic processes. Each cell, in addition to other processes, burns its own energy, maintains itself, manufactures its own enzymes, creates its own proteins, and duplicates itself. It is essential to understand that the total metabolism of the body is the sum of the metabolic operations carried on in each individual cell.

Organisms vary in their capacity to produce some of these building blocks internally. Some organisms are capable of producing all amino acids within their cells. Humans can produce all but eight. Some organisms can produce many of the vitamins within their cells. We can only produce one. The very complex processes of all metabolic functions are carried on within the cell. If we fail to supply the cell with the essential growth and maintenance nutrients we will experience a breakdown of these functions. When this breakdown is substantial we have the onset of disease or the manifestation of some related defect.

All naturally fertile soils contain adequate amounts of humic and fulvic acids produces by resident microbes within the soil. Humic and fulvic acids assist the plant in obtaining its complete nutrition. Our modern agriculture aims at one goal (with few exceptions) which is market. Food quality is sacrificed for food quantity. Since the farmer is paid by the bushel, yield is paramount to nutritional content. In his frantic effort for yield, he has succumbed to the Pied Pipers of agro-chemical companies with products to sell. He is further decoyed by bad advice from county agents and higher schools of learning that protect the “grant” status of moneys received from these same agro-chemical companies, who advocate the application of excessive amount of nitrate fertilizers to the soil. Such practices stun and destroy the indigenous microbial life within the soil. When microbial life is inhibited or destroyed, vital humic and fulvic acids are exhausted.

Gone Are The Minerals

When microbes are depleted from the soils, they are no longer present to convert inorganic minerals into organic minerals needed by plants. Excessive use of nitrate fertilizers inhibits the formation of normal plant proteins and stimulates an over-abundance of unused amino acids that attracts insects. Since pests were created to eat diseased plants this introduces the ideal environment for increased infestation because of increased insect food supply. The farmers reaction is more pesticides and fungicides to save his infested crop. This in turn inhibits or destroys even more vital microorganisms that are essential to mineral conversions to plant nutrients.

These deficient, pesticide laden products are turned into “cash” which the farmer thinks is the bottom line. Lacking in organic trace elements and other nutritional factors, but long on chemical residues from pesticides, insecticides, herbicides, these nutritionally hollow products end up on the tables of America. Without taste, and deficient in organic minerals and nutrients, we pee, boil and overcook what remains and ask, “Why do I hurt?”

Can Good Foods Be Found?

A very small percentage of the agricultural lands of America are fertile enough to produce nutritious and healthy foods. An honest effort in attempting to select a healthful diet from grocery shelves may be a nutritional disaster. Unless you are fortunate enough to organically grow your own foods, supplementation is a necessity.

In this century common vitamin deficiency diseases have been reduced dramatically due to our awareness of the role of vitamins in nutrition. New breakthroughs are just beginning to emerge in the use of increased dosages for treatment of some ailments. It should be noted however that vitamins cannot complete their function in the cell's metabolism without the presence of certain minerals. This may explain the fascinating effects of humic and fulvic acids at work in living organisms. Fulvic acid chelates and binds scores of minerals into a bio-available form use by cells as needed. These trace minerals serve as catalysts to vitamins within the cell. Additionally, fulvic acid is on to the most efficient transporters of vitamins into the cell.

An enzyme is a catalyst that does not enter into a reaction but speeds up or casues a reaction to take place. Enzymes are complex proteins. The burning of glucose in cells for instance, requires the action of several enzymes, each working on the substrate of the previous reaction. Each cell of the body (when properly nourished) is capable of producing the enzymes needed for complete metabolism. Research has shown that fulvic acid improves enzymatic reactions in cells and produces maximum stimulation of enzyme development. The fulvic acid molecule often contains within its structure coenzymes and important factors which the cells may utilize in stimulation of enzyme reactions and the manufacturing of, and formation of enzymes. Fulvic acid will in all probability, be found to be one of the key factors of enzyme reactions with all living cells.

Free radicals are highly reactive molecules or fragments of molecules that contain one or more unpaired electrons. They circulate through the body causing great mischief in bonding to and injuring the tissues. In addition to destroying tissue, they magnify the probability that injured cells will become susceptible to a great many infections and disease, or mutate and cause cancer.

In recent years frantic efforts have been make to locate and isolate compounds with extraordinary affinity for free radicals. Entire industries have evolved around such efforts, with nearly every vendor of health food products offering suitable solutions. Because of the limited public knowledge concerning the great contribution fulvic acid plays as a bi-directional super antioxidant, we need to consider certain facts.

Who Wears the White Hat

We have found that fulvic acid is a powerful, natural electrolyte that can act as an acceptor or as a donor in the creation of electrochemical balance. If it encounters free radicals with unpaired positive electrons it supplies an equal and opposite negative charge to neutralize the bad effects of the free radicals. Likewise, if the free radicals carry a negative charge, the fulvic acid molecule can supply positive unpaired electrons to nullify that charge.

Being a bio-available chelated molecule that can “also” chelate, fulvic acid wears the white hat. As a refiner and transporter of organic minerals and other cell nutrients it has the ability to turn bad guys into good guys by chelating and humanizing free radicals. Depending upon the chemical makeup of the free radical, they can be incorporated into and become a part of life sustaining bio-available nutrients. They may become an asset instead of a liability. In the event that the chemical makeup of the free radical is of no particular benefit, it is chelated, mobilized, and carried out of the body as a waste product. 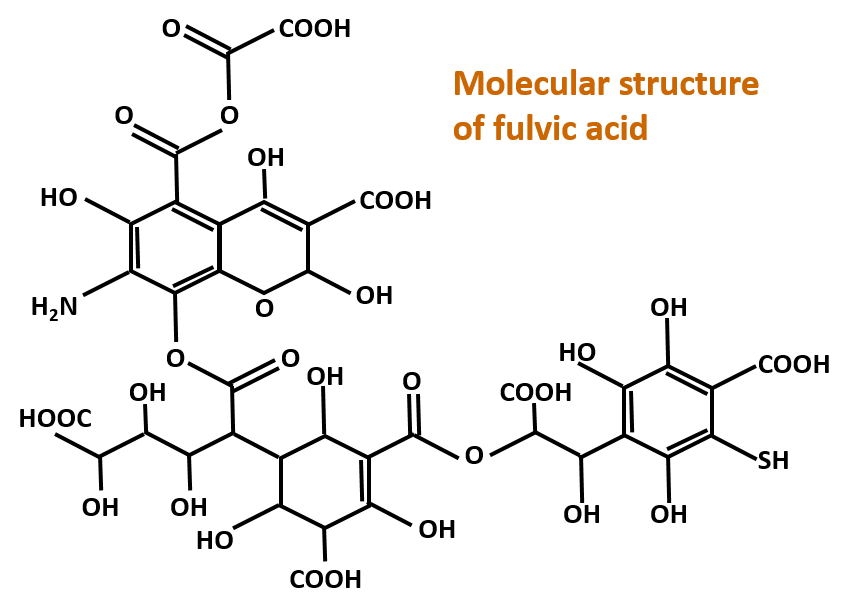