One of the most popular and invigorating types of tea is spearmint tea, which is enjoyed around the world for its many impressive benefits, including its ability to soothe indigestion, improve the immune system, protect against fungal infections, boost dental health, reduce facial hair growth and lower inflammation, among others.

What is Spearmint Tea?

This tea is made from the leaves of spearmint herb which is native to Europe and is scientifically known as Mentha spicata. Unlike many other forms of tea, which use dry leaves and are steeped in a bag or a special tool, spearmint tea is best when the leaves come fresh from the garden and are brewed directly in the boiled water. There are numerous varieties of mint out there in the herbal tea world, but one of the most common types is spearmint tea, which has a sweet taste that is slightly weaker than peppermint, but enjoys all the same benefits – and more!

Spearmint grows up to 1 meter in height with a thick stalk and sharply pointed leaves, which give the plant its name. Able to grow abundantly in a wide variety of temperate climates, this is also one of the most common forms of mint in the world, and its leaves can be used for many different things.

The essential oil from spearmint leaves is also highly valuable, and can deliver more concentrated doses of the nutrients and organic compounds that regular drinkers of spearmint tea can benefit from.

There are a number of important compounds and antioxidants that can be derived from spearmint tea, notably limonene and mint L-Carvone, along with various other flavonoids, and limited amounts of menthol (significantly less than in peppermint). These compounds can boost overall health in a surprising number of ways, which is why spearmint tea is often considered a sweeter alternative to peppermint tea.

Almost all of the health benefits are the same, and drinking the tea is an absolute pleasure. Now, let’s have a closer look at some of the benefits of spearmint tea.

Health benefits of spearmint tea include the following:

One of the most impressive findings of spearmint essential oil was its powerful antibacterial capacity, meaning that it can help to stave off infections in many topical applications. That same antibacterial potential is present in spearmint tea as well, which is why many people turn to the sweet, energizing tea for an immune system boost.

The anti-inflammatory effects of spearmint tea can help your stomach settle down when you’re experiencing any sort of stomach upset or nausea. By calming those inflamed tissues and optimizing your digestion, you can also improve nutrient uptake and eliminate cramping, bloating, constipation, and other unpleasant gastrointestinal conditions.

Another interesting effect of spearmint tea is that it can impact the hormonal balance within our body. There are countless different hormonal interactions that define our appearance, behavior, mood, and daily energy cycles, and spearmint tea has been shown to regulate and normalize those chemicals to healthy levels.

A specific hormonal issue that spearmint tea handles is hirsutism, defined as the growth of unwanted hair on certain women’s bodies, namely due to an unusually high level of androgens. By reducing this ‘male’ hormone and regulating the rest of the body’s hormones, spearmint tea, in a controlled study, was able to measurably reduce the symptoms of hirsutism in a two-week study.

The limonene found in this tea is known to counter the negative effects of free radicals and increase neurotransmitter activity, to the point of improving memory, concentration, and focus. A single glass of spearmint tea can help you clear your mind and tackle the cognitive tasks at hand.

Free radicals are the primary cause of the cellular breakdown and the development of chronic diseases within the body. For example, cancer is largely caused by free radicals stimulating cellular mutations. The antioxidants found in spearmint tea, however, can eliminate these free radicals and keep the body healthy, without putting undue strain on the immune system.

The anti-inflammatory nature of spearmint tea is well-known, and it is commonly used to eliminate headaches and other pains throughout the body, particularly in the joints. This is also an application of spearmint essential oil. The anti-inflammatory compounds in this powerful plant can also help soothe sore throats and soothe indigestion by relaxing the spasming muscles of the gut.

Spearmint tea can reduce the discomfort and pain of an infant who is particularly colicky. This can be unpleasant for both the infant and the parents, so a small, mild dose of spearmint tea can often do the trick. The soothing compounds and relaxing nature of the tea are particularly effective in small doses. However, if you are breastfeeding, you should closely monitor how much spearmint tea you are drinking.

Spearmint has long been used in traditional medicines due to its powerful anti-fungal activity. In many parts of the world, fungal infections and intestinal parasites are still quite common, and the use of spearmint tea is an effective and simple way to clear out the digestive tracts and make an inhospitable environment for these unwanted agents to take hold.

If you are pregnant, breastfeeding or on medication, consult with your doctor before adding spearmint tea as a major beverage in your diet. While this is considered a mild tea, it is better to ask your doctor, in case there are potential interactions with any prescribed medication. 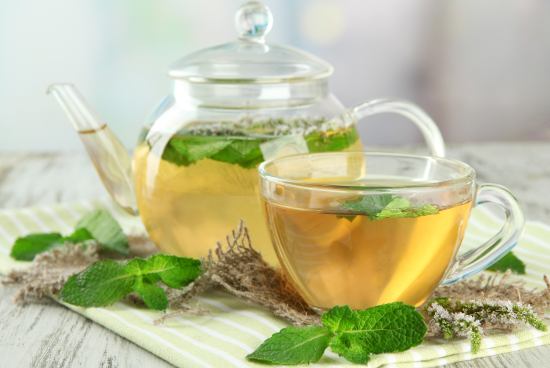