What’s the difference between sodium and salt?

Salt and sodium are often used interchangeably, but they’re not exactly the same thing. Sodium is a mineral that occurs naturally in foods or is added during manufacturing or both. Table salt is a combination of sodium and chloride. By weight, it is about 40 percent sodium and 60 percent chloride.

Salt, in chemistry jargon, is simply sodium plus chloride. Nothing more-or-less than a chemical compound formed by the marriage of two minerals. But, we aren’t chemists. We are naturalists! Yes, salt is definitively sodium chloride, but to understand Salt, we must understand where salt comes from.

Salt forms as tiny crystals both underground and in our oceans, varying in crystal sizes, colors, and mineral composites. Himilayan Pink Rock salt, for instance, has large discrete pink crystals and is composed of sodium, chloride, potassium iron, calcium, magnesium and 80 other live minerals. The benefits of this mineral combination helps balance out the body so that your nerves can function properly by contributing to things, such as, your internal fluid balance, electrolyte balance, pH balance, and muscle regulation.

With the arrival of the industrial world, naturally mined salt has been “chemically cleaned” and reduced to the most basic combination of sodium and chloride. All the key, essential minerals and trace elements were REMOVED as impurities! (I know, I know…. it’s absolute nonsense!). Once regarded as white gold, salt has not been converted into white poison! It has been turned into an unnatural, isolated, unwholesome substance that has nothing in common with authentic salt.

Isolated sodium chloride, without its equalizing counterparts such as potassium, calcium, and magnesium behaves as an aggressive substance in the body, disrupting the important patterns that ensure the geometric structures (critical balancing) in our cells. When these structures are damaged, we are without energy and are lifeless.

Salt should not be used just to add flavor to our food… but for its vibration pattern, which is similar to that of our bodies . . .Therefore ladies and gentlemen, take salt very seriously and make sure you get the real stuff, the salt mined from a real place, by people who truly understand salt (cough, cough…our salt miners from the Himalayas)! This will ensure to you that you are getting the rawest, most magical rock salt possible!

Time to get balanced!

Here are the approximate amounts of sodium in a given amount of table salt:

What are common sodium sources?

Sodium occurs naturally in some foods and is often added during manufacturing. Of course, we also add it during cooking and at the table, too. Naturally occurring sodium is in foods such as celery, beets and milk. Packaged and prepared foods, like canned soups, lunch meats and frozen dinners, often have sodium added during manufacturing. This sodium might be in the form of salt or other forms of sodium (like baking soda) that show up in our food.

Overall, more than 75 percent of the sodium we eat comes from processed, prepackaged, and restaurant foods. This makes it hard to choose foods with less sodium and to limit sodium because it’s already added to food before we buy it. The rest of the sodium in our diets occurs naturally in food (about 12 percent) or is added by us when we’re cooking food or sitting down to eat. The latter only makes up only about 10 percent of our total sodium intake, so even if you never use the salt shaker, you’re probably getting too much sodium.

The top six sodium sources in our daily diet include: Note - these are STORE-bought foods

Surprised? Some of these don’t even taste salty! Keep in mind that different brands and restaurant versions of the same foods may have different sodium levels. Some foods come in versions with less sodium, too. Compare labels and choose the product with the lowest amount of sodium you can find in your store.

Sodium comes in many forms – and it is seen on the ingredients label as “salt”, “soda” and “sodium.” And sometimes, sodium is hidden in multiple words on the label. Here are some examples of ingredients that contain sodium:

Is sea salt or kosher salt healthier than table salt?

Foodies and chefs may prefer kosher or sea salts for their taste, texture or color. But table salt, kosher salt and most sea salts all contain about 40 percent sodium by weight. Even though sea salt may have some trace levels of minerals like magnesium, potassium and calcium, the amounts are tiny and you can get them from other healthy foods.

Some varieties of sea salt may claim to have less sodium than table salt. You can check the Nutrition Facts label to compare how a given sea salt compares to table salt, which has about 575 mg sodium per ¼ teaspoon.

Why is there so much sodium in the food supply?

Sodium plays many roles in food. Adding flavor is probably its most well-known function. It’s also used as a preservative to keep food safe, or to enhance the color of food or give it a firmer texture. For example, sodium in the form of baking soda (sodium bicarbonate) is used to help bread and other baked goods rise. Even though sodium plays a key role in many foods, more salt is often added than is necessary. The good news is that many food companies and some restaurants are tweaking their recipes to cut the sodium in the foods they make for you.

Reducing your salt intake by AVOIDING processed foods and changing over to a Whole Food Plant Based diet, will resolve any issues you might have with regard to excessive sodium intake.  Your body NEEDS salt - so avoiding NATURAL sources is not the right way to go.  AVOID processed foods and your salt levels will regulate themselves. 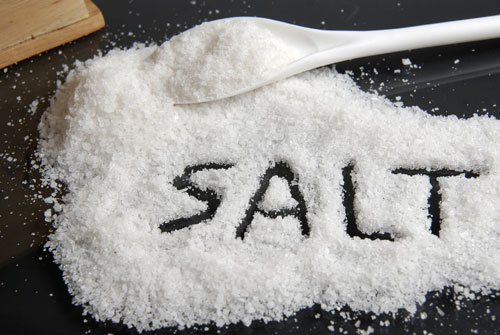