Quinoa is an interesting form of pseudo cereal that is not technically a grain, or a traditional cereal. It is a crop that has been grown for thousands of years, and is grown mainly for its edible seeds. The scientific name of quinoa is Chenopodium, and it is a species of goosefoot. It is primarily grown in South America, in the Andean region, including countries like Ecuador, Peru, Colombia, and Bolivia. The scientific name of the quinoa is Chenopodium quinoa.

It is thought to be originated in the Andean region. Quinoa generally grows to a height between 1m to 3m in length, producing grains every year that can grow in various colours such as white, yellow, pink, orange, red, brown, and black. The grains can be consumed whole as well as in the form of a flour.

It is related to spinach and beetroots, and is a becoming a major foodstuff in America, Europe, China, and Canada, despite the fact that it must be imported. It is highly valuable because it is such a nutrient-rich food source, and it can be used like many common grains, or ground into a powder or flour. It has a very low content of fat and can be added to diets around the world as a healthy alternative to many other similar foods.

Quinoa is an ancient cereal that was cultivated along the Andes for the last 7,000 years. The plant was grown in the high altitudes ranging between 2,000-4,000 meters in the Andes, where every year, the Incan emperor customarily sowed the first seeds. It was a very important agro plant for the Incas, as it was one of their basic cereals, apart from maize.

In the recent past, the Peruvian government has been giving incentives to farmers to increase the production of quinoa and other similar crops because of their outstanding nutritional qualities.

Quinoa is considered such an essential “wonder food” because it not only has a tremendous amount of vitamins and minerals, but also organic compounds and various other nutrients that can have a huge impact on our health. It is consumed around the world in ever-increasing numbers because it is wonderfully nutritious and very versatile in several foods.

There is an impressively large amount of manganese, magnesium, and phosphorous, as well as significant amount of iron, zinc, copper, and potassium. Quinoa even has trace amounts of calcium, sodium, and selenium. It is also a rich source of phytonutrients and flavonoids like kaempferol and quercetin, as well as tryptophan, which have their own very special health benefits that add to the demand for quinoa.

Finally, there are a huge amount of protein components and vital amino acids that the body needs within quinoa. This is one of the best things about this wonderful food.

It is not just a mineral and organic chemical-rich form of food, it’s also an ideal source of vitamins. Vitamins help the body function properly and are essential parts of any diet. It contains significant amounts of thiamine, riboflavin, folate, and vitamin B6.

This makes quinoa the perfect food to help regulate the internal functions and the metabolism of the body, due to the high number of B-complex vitamins it contains.

Caloric Content of Quinoa
100 grams of quinoa only contains 120 calories, and only 2 grams of fat. For a grain-like substance, that is far less than fat than most foods of that type. For people concerned about their weight, replacing other grain foods with quinoa is a wonderful way to slim down.

It is a nutritive food that is good for health. It provides various health benefits, some of which include:

Quinoa has antioxidant properties that help in protecting the heart, liver, kidney, lungs, and pancreas against oxidative stress. When compared with other pseudo cereals, such as amaranthus, quinoa has higher antioxidant activity. Some of the antioxidants found in it include total phenolics, polyphenols, and anthocyanins. Sprouts of quinoa have also shown significant antioxidant activity.

The quinoa plant has been highly regarded for its high protein value, not because it has very high protein, but rather because it is a source of essential amino acids like lysine, methionine, and tryptophan, all of which cannot be synthesized in the body.

Quinoa seeds can be beneficial in regulating blood glucose levels and blood cholesterol levels. A study on high fructose-fed rats indicated that the consumption of quinoa seeds can help in reducing the adverse effects of fructose on both the glucose level and lipid profile.

The amount of calcium found in quinoa is similar to that of dairy products, but it has been pointed out that those who are intolerant of dairy products can eat it. Calcium is very important for the bones, brain, and nervous system.

Good for the Digestive System:

Quinoa contains insoluble fibre, which helps to improve the digestive process and facilitates healthier bowel movements. This further helps in reducing the risk of flatulence, bloating, pain, constipation, and gas.

Magnesium is one of the trace elements found in quinoa. The dietary intake of magnesium provides benefits, including the control of asthma, increased bone health, a reduced risk of osteoporosis, an increase of heart health, and the regulation of blood sugar levels.

A study found that a high intake of wheat, oat, spaghetti, rice, and oat spaghetti induced more eating. On the other hand, alternatives, such as pseudo cereals like quinoa and amaranthus, did not induce more eating. This is particularly important for those who want to control their diet and who want to lose weight. Consuming quinoa will reduce the excess intake of food, thereby promoting healthier weight.

Before cooking quinoa, one must make sure that the saponin layer on the seeds has been removed. In most cases, quinoa bought in the US is rinsed off and dried, but to be extra careful, you can rinse it off. This saponin can give a bitter taste to quinoa if it is not rinsed off properly.

Quinoa, after soaking and rinsing, can be boiled in water. 1 cup of quinoa takes about 1½ cups of water to boil. Boil it for about 15 minutes, then add a pinch of salt for it to cook. While pressure cooking, only 5 minutes of high-flame cooking is required.

Quinoa can be added to salads with the choice of your vegetables and seasoning. The salad tastes good and is also nutritious. It is good for those who don’t want to gain extra weight. 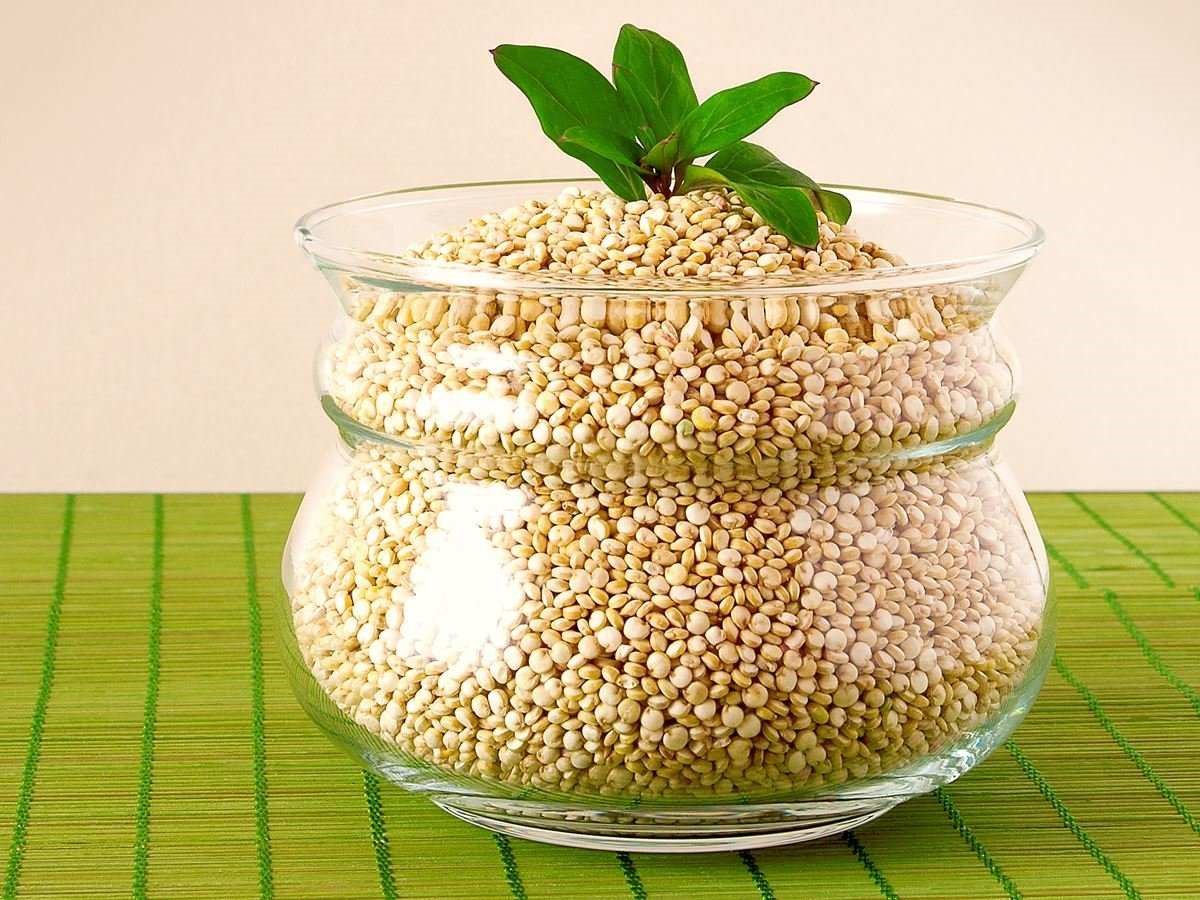 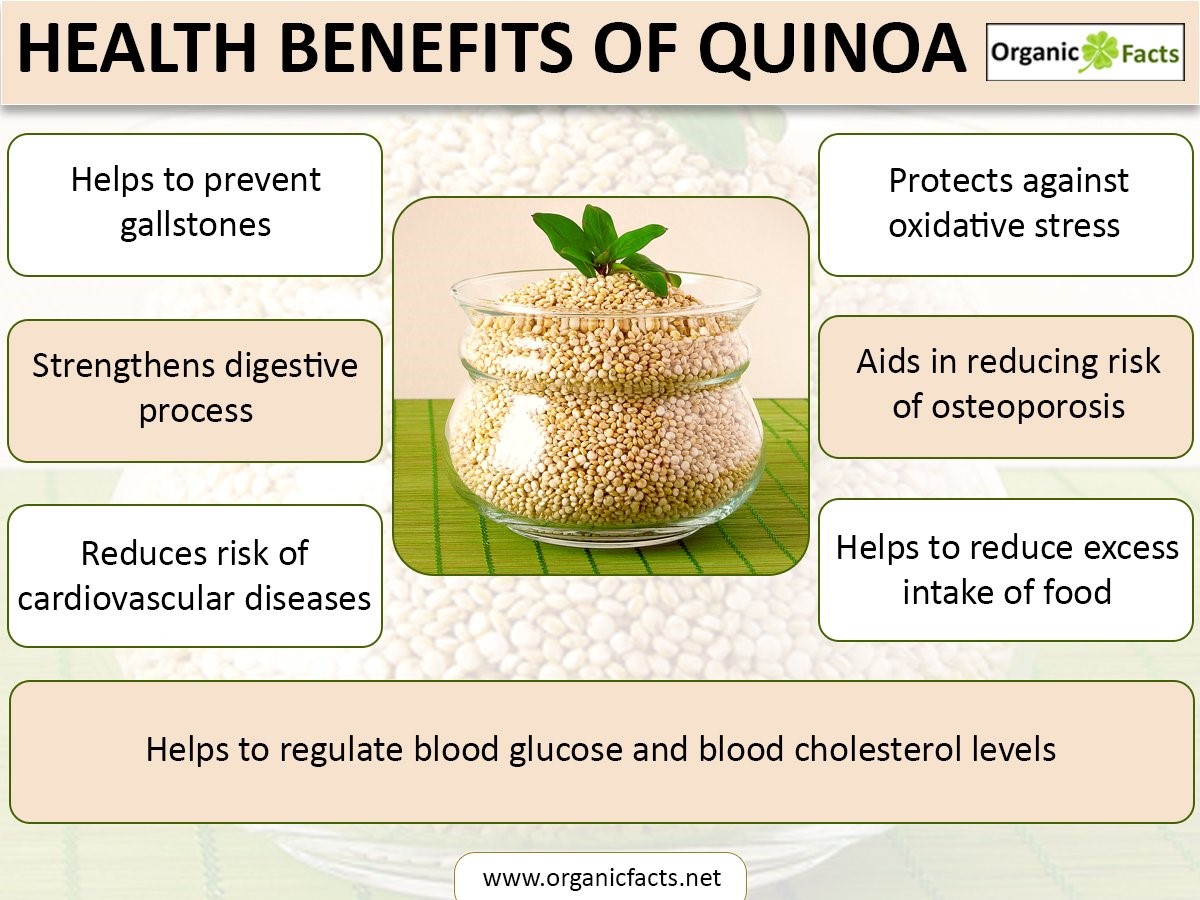