If you have dry, itchy, scaly, painful, red patches of skin that crop up, there’s a chance you’re suffering psoriasis symptoms. Psoriasis is a persistent autoimmune condition that causes red, raised plaque to form on the surface on skin, which can be both irritating and embarrassing. Considered to have no definitive cure, psoriasis usually comes and goes in cycles over the course of someone’s life, often causing scaly, uncomfortable skin flare-ups at times when immune function is low or stress levels are high. It’s believed to affect greater than 3 percent of the U.S. population — or more than 5 million adults at any time. (1)

Doctors normally use medications and prescription creams to help lower the appearance of red psoriasis patches on the skin, but these don’t solve the underlying problem or autoimmune condition itself. Below the skin’s surface, psoriasis can cause skin cells to multiply at a very rapid pace, sometimes up to 100 times faster than in someone who doesn’t have psoriasis. (2) This causes a high amount of skin cells to eventually reach the outer layer of the skin and die off on the surface (as all aged skin cells do), leaving behind a raised, red plaque covered with white/silver scales.

Experts still don’t know of any way to end this cycle from happening for good, although research shows that improving immunity and helping to treat sensitive psoriasis skin topically using natural, gentle ingredients can ease symptoms. You might also be surprised to know how better managing stress and your routine can help reduce your psoriasis as well. For example, studies show that as many as 80 percent of people having psoriasis flare-ups report recent emotional trauma. (3)

Because psoriasis is an autoimmune disorder, it takes a variety of lifestyle changes and remedies to bring about significant relief, especially if the autoimmune disorder has become severe and also causes other symptoms, such as joint pain and fatigue.

The Most Common Psoriasis Symptoms

Plaque psoriasis is the most common type of this condition, but there are also several other forms of psoriasis. All types cause discomfort in the skin in one way or another, although when symptoms first appear and which parts of the body they impact most depend on the specific form on psoriasis. Psoriasis symptoms appear on the skin of the knees, elbows and scalp most often. Less frequently some people also develop psoriasis symptoms on their stomach, back, hands and feet.

There are several forms of psoriasis, all of which have their own hallmark symptoms: (4)

The most common symptoms of psoriasis, especially those seen in people with plaque psoriasis, include: (5)

Other than plaque psoriasis, additional psoriasis symptoms can result from other form of psoriasis, including:

How to Treat Psoriasis Symptoms Naturally

On the other hand, foods that can aggravate psoriasis symptoms and contribute to autoimmune reactions include:

2. Use Natural Herbs and Supplements

3. Get at Least 20 Minutes of Sunshine Daily

Getting 20 minutes of sunshine daily, three to four days a week, can greatly improve psoriasis symptoms by raising vitamin D levels. Research shows that vitamin D changes the way cells grow and might help slow down skin cell production in people with psoriasis, which reduces plaque. This helps ease psoriasis symptoms like thick skin and scaling. Vitamin D also positively affects how the immune system functions and can lower autoimmune reactions or inflammation.

If you have sensitive psoriasis patches due to ending medication use or experiencing a flare-up, be very careful about sun exposure until you’re healed in order to prevent burns. Wear SPF 30 or higher if you’re prone to burns, and try to get sunlight when the sun isn’t at its strongest, which is usually between 10 a.m. to 2 p.m. Another option besides spending time in the sun is to use an indoor light box, although it’s not known if this works as well to boost vitamin D levels.

Both emotional and physical stress can cause psoriasis to develop or psoriasis symptoms to become worse. People with psoriasis who use relaxation techniques and make an effort to reduce stress usually notice improvements in symptoms, which makes sense considering psoriasis is an autoimmune disorder. Autoimmune disorders are often aggravated by stress due to how the “fight or flight” response impacts the immune system, releasing higher levels of inflammatory proteins called cytokines and contributing to hormonal imbalances.

Many studies have found that a high proportion of patients with high amounts of emotional stress experience some sort of disease or illness, which can then cause even more stress and trigger a vicious cycle. And as mentioned above, the vast majority of people with psoriasis report high amounts of stress prior to the outbreak of their symptoms. Stress relievers (like exercise, meditation, yoga and spending time outdoors) can help keep inflammation at bay and therefore psoriasis symptoms under control.

5. Moisture and Use Soothing Essential Oils

Psoriasis symptoms are usually at their worst when skin is very dry and inflamed. Moisturizing the skin and using natural anti-inflammatory oils can ease symptoms like redness, scaling and pain. Depending on where itchiness and flaking occur, moisture can be increased by using natural shampoos, lotions, gels, foams, creams and more greasy ointments.  Keep skin moisturized by applying thick creams or oils, such as virgin coconut oil or raw shea butter or your own Homemade Body Butter Lotion.

Other options to help lock in moisture include petroleum jelly (Vaseline), almond oil or virgin olive oil. Try moisturizing after a warm shower (avoiding very hot water), but be careful not to add too much oil before exercising or during the warm months of the year since sweat mixed with thick creams can make your psoriasis symptoms worse. You can keep skin damp during the night by applying lotion, wrapping a bandage around the area and then gently washing away the lotion in the morning — just be careful to use natural products that are not drying.

Essential oils like lavender, frankincense, geranium and tea tree oil can also soothe inflamed skin and support the healing process, without the need for irritating prescription creams. First perform a small patch test to make sure you don’t react badly to the oils. Use a very small amount, since essential oils are highly concentrated. Mix three drops of lavender oil and three drops of frankincense oil with one teaspoon of coconut oil and rub onto the affected area one to three times daily.

Psoriasis vs. Eczema: How to Tell the Difference

It’s easy to mistake psoriasis for other skin conditions, including eczema, which has some of the same symptoms, or even rosacea. Compared to ezcema — which also causes skin inflammation and red, dry, cracked skin — what does psoriasis look like that makes it noticeably different? First off, location: Psoriasis is commonly seen on the knees and elbows, while eczema usually forms on sensitive areas like the backs of knees, hands, cheeks or chin, and the inside of the elbows.

Eczema tends to be very itchy, while psoriasis may cause more pain and dry scales on the skin in addition to plaques. Another factor that distinguishes eczema from psoriasis is that eczema commonly causes moisture on the skin and skin oozing, crusty sores, thick skin, and cystic or pimple-like eruptions, but psoriasis normally doesn’t cause such sores/blisters and remains very dry.

Both conditions tend to run in families, although their major causes are somewhat different. Eczema commonly appears at a younger age, such as during infancy or childhood, while psoriasis is an autoimmune disorder that appears in adults most often and emerges whenever immunity has been compromised, such as following other illnesses or stress.

There’s a link between reduced immune function and psoriasis — for example, respiratory infections, diabetes and arthritis might all contribute to its formation. While eczema can also be triggered by inflammation and sensitivities, it’s more likely to flare up in response to external factors, such as sunburns or reactions to skin care or household products (soaps, detergents, lotion, etc.).

The Causes of Psoriasis

Like other autoimmune disorders, psoriasis is caused by a combination of different factors. Most doctors are unsure about what exactly leads most people to develop psoriasis, but research suggests that the major contributing factors include:

According to the National Psoriasis Foundation, “Scientists believe that at least 10 percent of people inherit one or more of the genes that could eventually lead to psoriasis. However, only 2 percent to 3 percent of the population develops the disease. Researchers believe that for a person to develop psoriasis, that person must have a combination of the genes that cause psoriasis and be exposed to specific external factors known as triggers.

To read the complete article go to Dr. Axe’s website 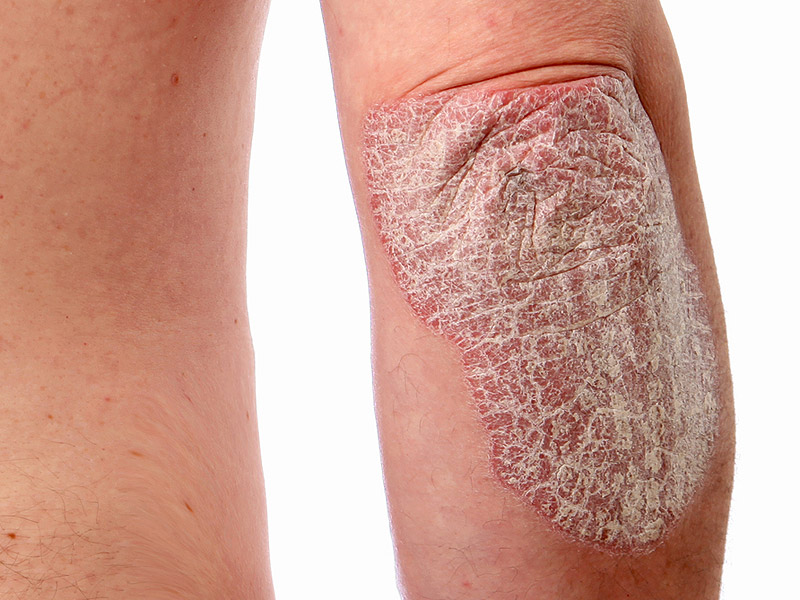 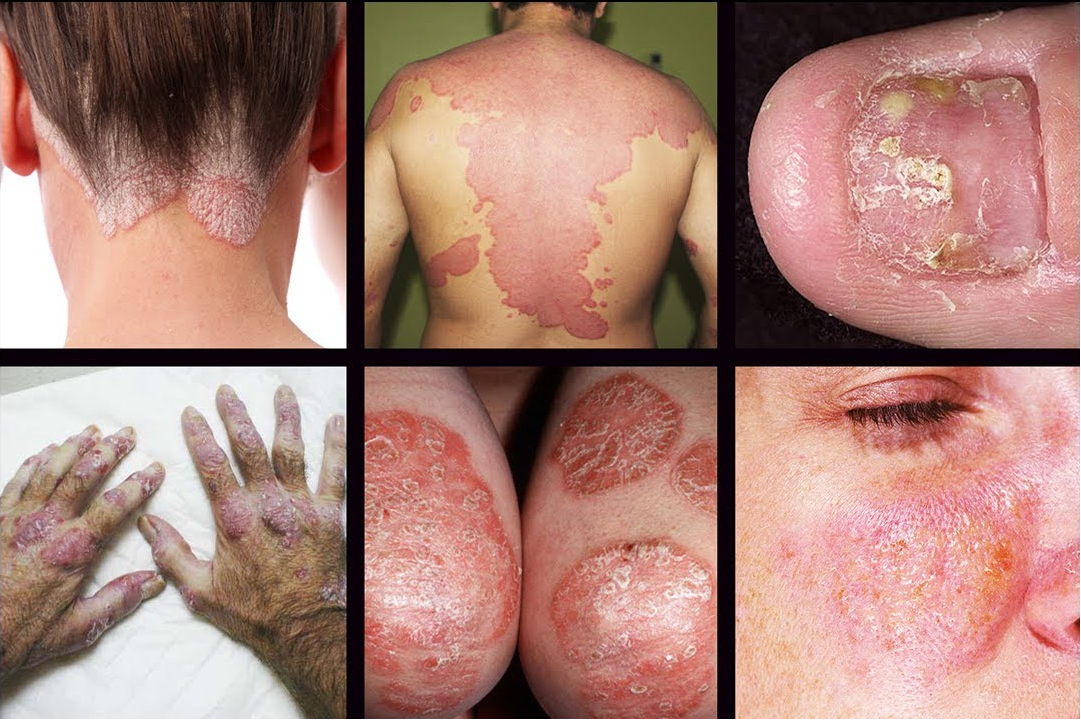 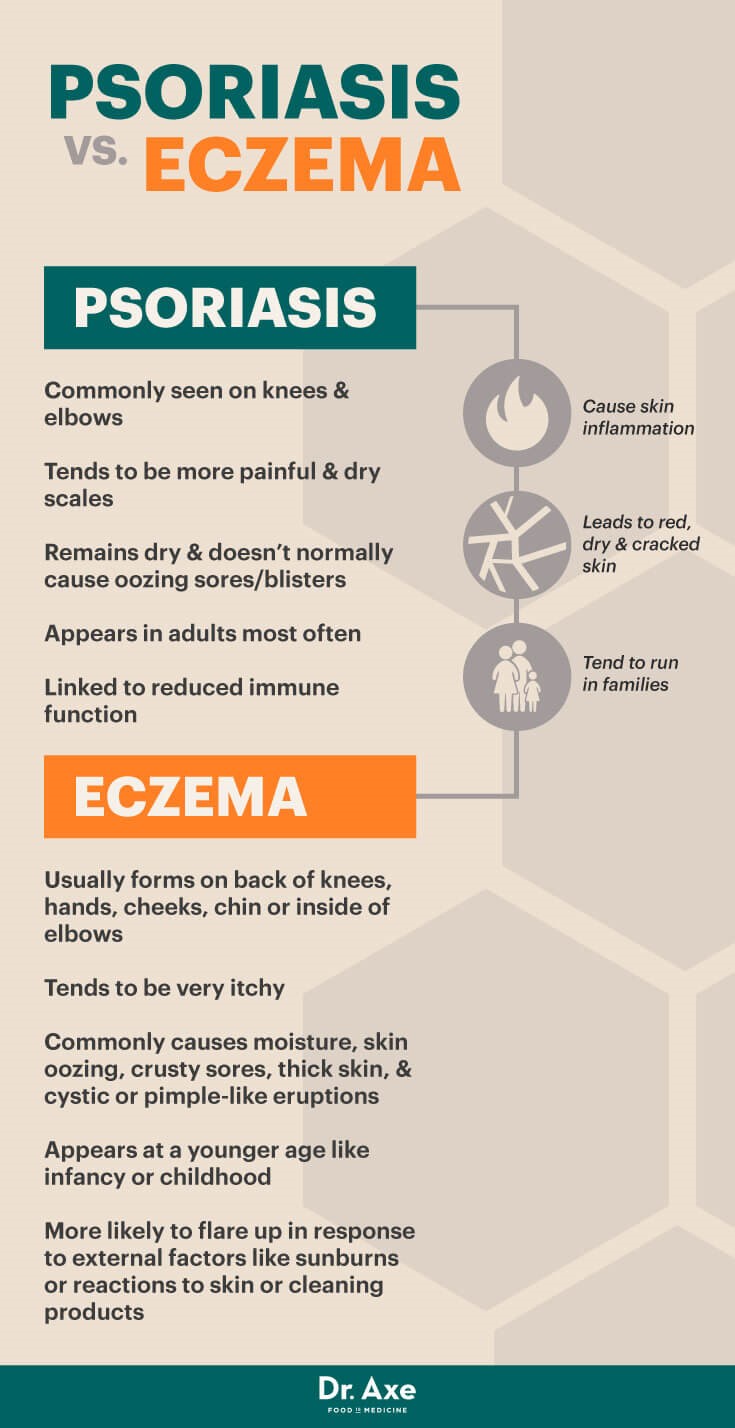