Seeds contain high levels of essential fatty acids, the full profile of amino acids needed to form complete and digestible protein, plus vitamins A, B, C and E and the minerals calcium, magnesium, potassium, zinc, iron, selenium and manganese.

‘Seeds provide the board and lodging for the next generation of plants, so it is not that surprising that they are such a complete food,’ explains nutritional therapist Maria Griffiths. ‘They contain all the nutrients required for germination so that the plant can come into full fruition and bear seeds for the next generation,’ she adds.

Seeds are so nutrient-dense you don't have to eat a lot of them. According to Maria a tablespoon or two a day is more than enough. She advises you keep a jar of pumpkin, linseed, sesame and sunflower seeds on your kitchen shelf and stick to one type a day or mix and match. They are also a very versatile food. Try them in cooking to flavour a stew or stir fry, as a garnish, sprinkled over your breakfast cereal, in salads or soups.

Alternatively they make healthy snacks for those peckish moments. ‘As they are a low GI food they are a good source of slow release energy, which helps to keep blood sugar levels stable and you feeling full for longer.

Here are a few of the health benefits of some seeds:

Health benefits of pumpkin seeds
In China the pumpkin is called the Emperor of the Sun and has become the symbol of fruitfulness. It is a member of the gourd family and native to Asia. It gets its name from the Greek word pepon, which means cooked in the sun.

Benefits Pumpkins seeds are rich in the amino acids alanin, glycene and glutamic acid, as well as being a good source of zinc and omega-3 essential fatty acids. They also contain protein, iron and phosphorus and are low in carbohydrates.

The use of pumpkin seeds is well documented in old herbals for the treatment of prostate disorders and modern research backs this up. The reason? They contain curcubitacins, substances which are thought to help prevent conversion of testosterone into dihydrotestosterone, high levels of which can encourage prostate enlargement. Pumpkin seeds are also thought to help urinary tract infections in women.

Try them Roasting pumpkin seeds helps to bring out their natural flavour. They are especially delicious sprinkled over salads.

Health benefits of sesame seeds
In Hindu mythology the god Yama blessed the sesame seed and these tiny seeds are regarded throughout the East as symbols of immortality.

Benefits Sesame seeds are packed with protein, iron, zinc, magnesium, calcium and phytic acid while being low in carbohydrates. They also contain sesamin and sesamolin, substances that may help lower cholesterol levels, and are a well-known source of vitamin E plus omega-6 and monounsaturated fats. These can help to prevent furring of the arteries as well as boost the elasticity of the skin. As an added bonus, sesame seeds are thought to aid digestion, to stimulate blood circulation and help the nervous system.

Try them Snack on sesame seeds or make them into the creamy paste known as tahini, see our recipe below. You can spread this on bread, mix with pureed chickpeas in hummus or use as a sauce with vegetables as the Arabs do. To get the maximum nutrients from sesame seeds you need to chew them well. See below for tahini treat.

Health benefits of sunflower seeds
The sunflower became the mystic symbol of several early civilisations, notably the Incas who worshipped the sun. The North American Indians used the leaves as animal food, the petals were brewed into a distinctive yellow dye for their clothes and skin and the seeds were ground into food and crushed into oil.

Benefits Sunflower seeds are rich in the B complex vitamins, which are essential for a healthy nervous system, and are a good source of phosphorus, magnesium, iron, calcium, potassium, protein and vitamin E. They also contain trace minerals, zinc, manganese, copper, chromium and carotene as well as monounsaturated and polyunsaturated fatty acids - types of 'good' fat that may help to protect the arteries.

A good natural source of zinc, sunflower seeds are popular immune boosters. They may also help protect against heart disease while their vitamin B can help in the fight against stress.

Health benefits of linseeds (flaxseeds)
Originating in Mesopotamia, the flax plant has been known since the Stone Age and the health benefits of flaxseeds, more often known as linseeds, were widely praised in ancient Greece and Rome.

Benefits They are an excellent source of omega-3 and omega-6 essential fatty acids, which are needed for most bodily functions, as well as dietary fibre and manganese. They are also rich in folate and vitamin B6 and the minerals magnesium, phosphorus and copper.

In addition linseeds contain lignans, a type of phytoestrogen, which it is believed may help relieve menopausal symptoms such as hot flushes. Because they are high in soluble fibre, linseeds are also sometimes used to relieve constipation.

Try them Soak a tablespoon of linseeds in a glass of water for a few hours then drink. Alternatively grind them in a coffee grinder and sprinkle over your morning cereal.

Other information sourced from: saga.co.uk 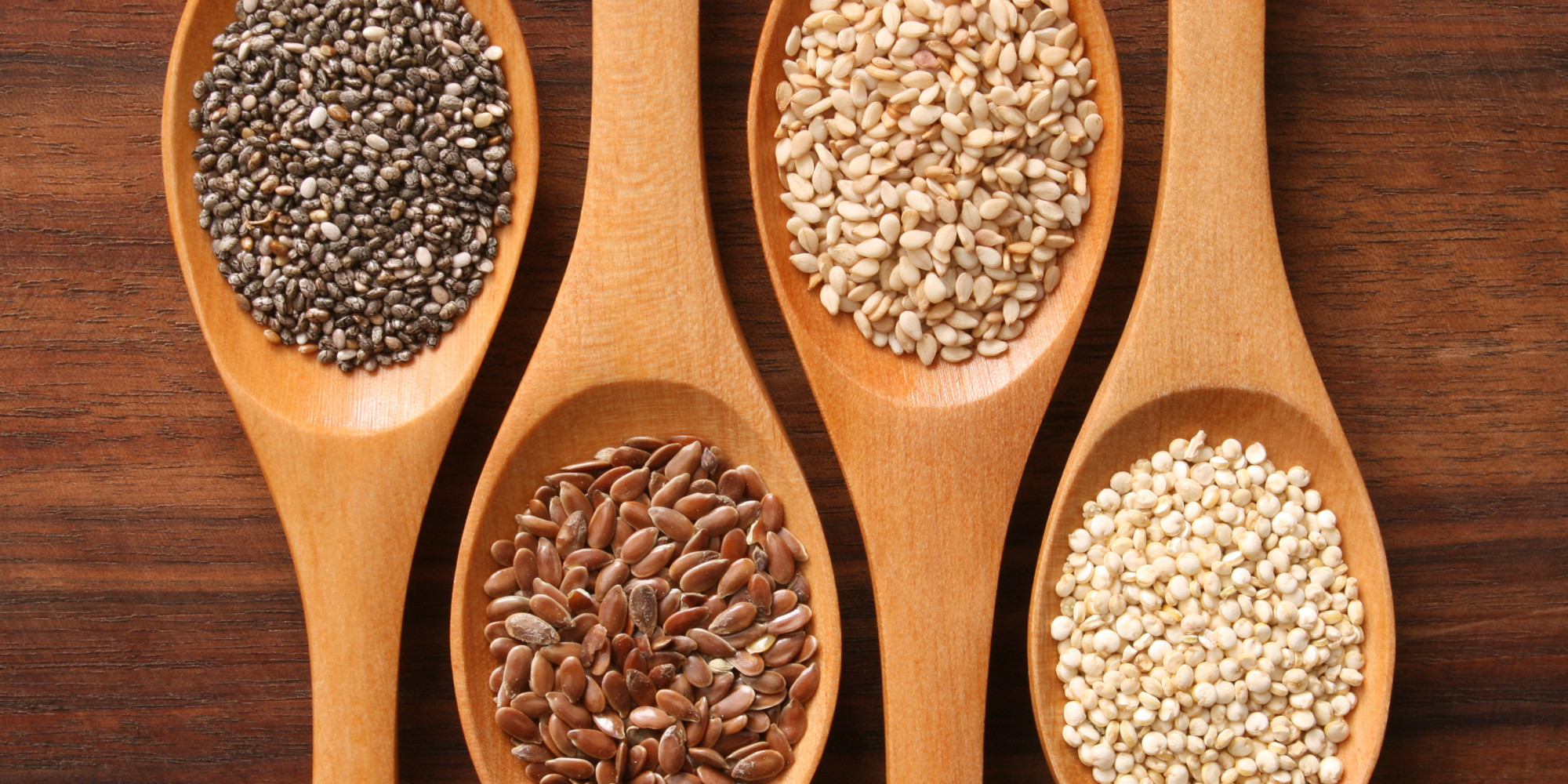 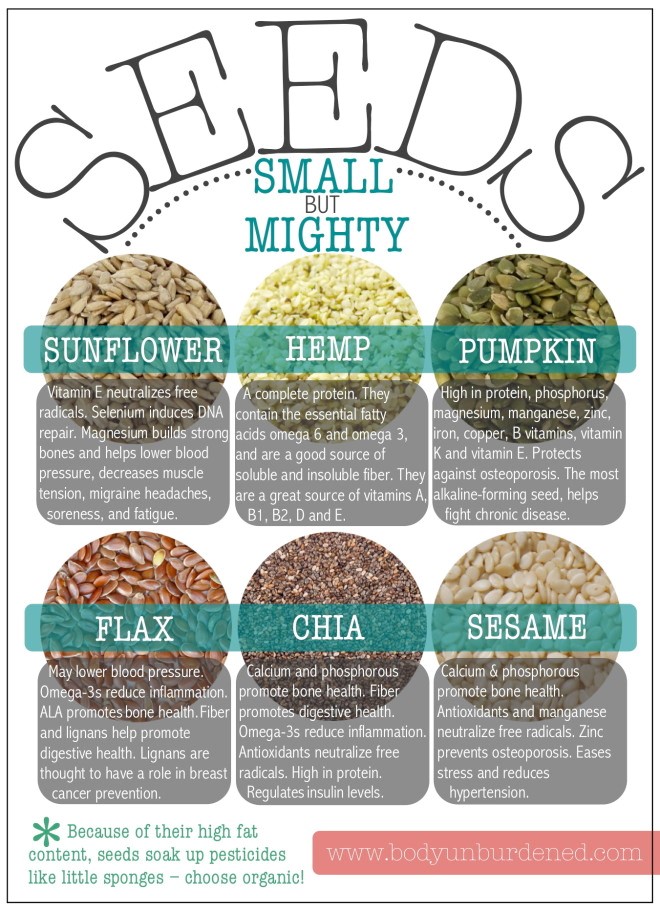 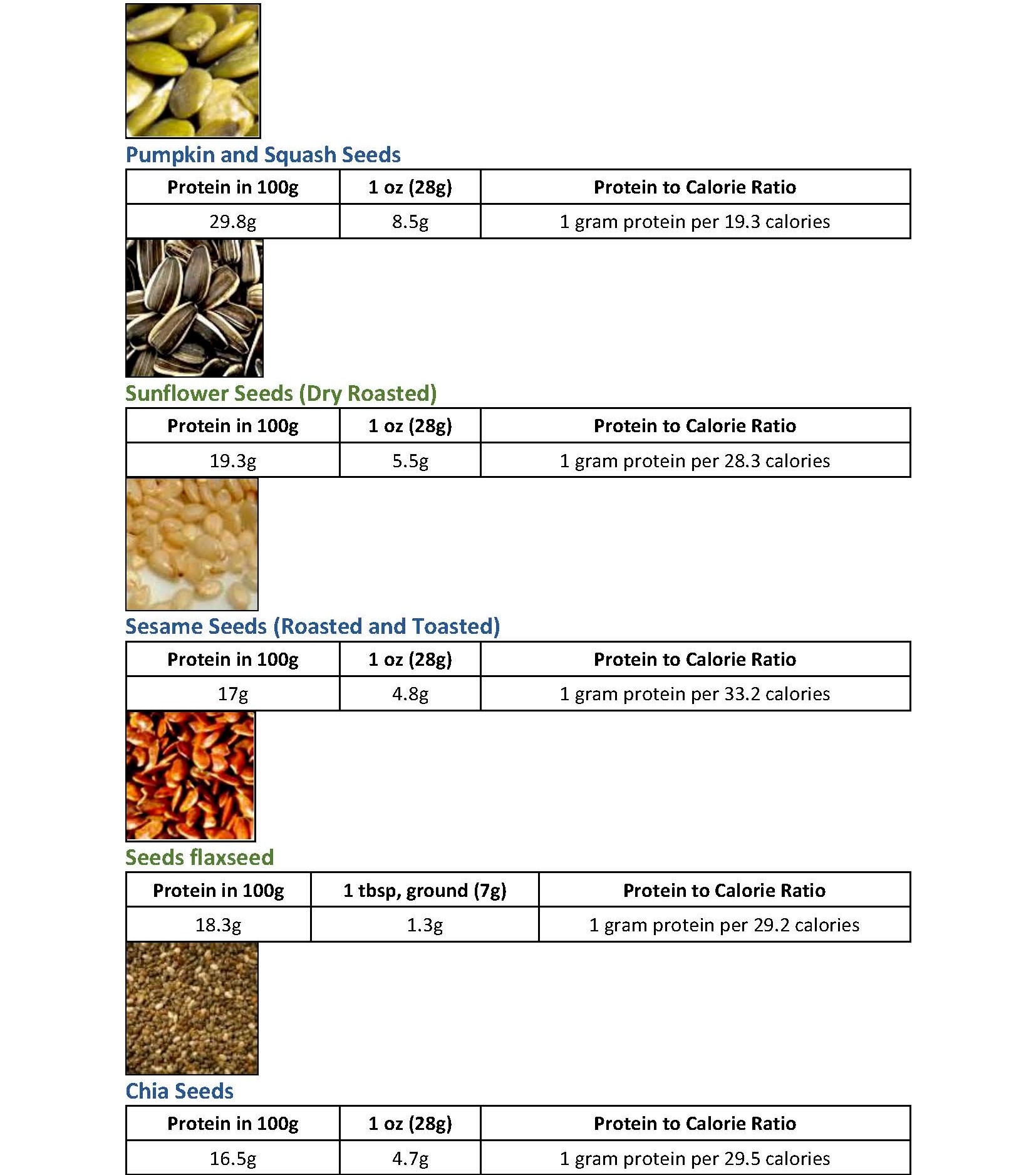