How to Get Prebiotics?

In a nutshell, prebiotics are a type of fibre. They are un-digestible plant fibres that already live inside the large intestine. The more food, or prebiotics, that probiotics have to eat, the more efficiently these live bacteria work and the healthier your gut will be.

You’re probably already ingesting prebiotics and may not even know it. You see, prebiotics naturally exist in many foods you may already consume on a regular basis. Since fibre is the source for prebiotics, foods that are high in fibre are also typically high in prebiotics.

The most common type of prebiotic is from the soluble dietary fibre inulin.  Inulin is common in many plants containing fructan – a polymer of fructose molecules that occur in foods such as artichokes, asparagus, green beans, leeks, onions and wheat, many of which are eaten frequently and are an excellent source of inulin.   Inulin is found in over 36,000 plants such as:

Here are some of the top contenders on the prebiotic foods list. How many of them can you incorporate into your meals this week?

At nearly 65 percent of fibre by weight, raw chicory root is one of the best prebiotic food sources around. Raw chicory root is found in health stores or gourmet markets in the form of a supplement or in its ground form. You might have even eaten it without knowing it, as it’s also added to many types of food products here and there, including cereal, breakfast bars, dairy products and bread.  If you’ve had raw chicory root already, you know it has a flavour akin to coffee, even though it doesn’t have any caffeine. It’s often used as a substitute for coffee in the southern region of the United States, as raw chicory root doesn’t produce the unpleasant effects of coffee that some individuals experience, such as feeling jittery or having difficulty with sleeping.

Dandelion greens are chock-full of nutrients, including Vitamin K, Vitamin A, calcium and iron. In fact, a one-cup serving of raw dandelion greens provides you with 535 percent of your recommended daily value of Vitamin K, which is believed to help with blood clotting and maintaining strong bones in the elderly.  You can savour the prebiotic benefits of raw dandelion greens by adding them to your salads, sandwiches, stews, casseroles, soups or herbal teas. Because they can have a somewhat acrid taste when eaten raw, you can blanch them in boiling water for about 20 seconds to reduce this taste.

Raw garlic is also loaded with tons of nutrients, including manganese, Vitamin B6, Vitamin C and selenium. There are several healthy ways you can add raw garlic to your diet, including:

The great thing about raw leeks, besides being a high prebiotic food, that is, is that they can be incorporated into just about any dish. As a sweeter version of the onion, they can be tossed into pasta, added to a garden salad, or used as an edible garnish for your quiche.  Of course, they also work fabulously in soups, but if cooked, they won’t have quite the same prebiotic content. A one-cup serving of raw leeks including bulb and stem boasts 52 percent and 18 percent of your recommended daily values of Vitamin K and Vitamin C, respectively.

Raw onions are a member of the lily family, such as garlic is, by the way. Eating onions raw provides you with organic sulphur compounds, which are an important mineral in your body. They are destroyed when you cook them.  Raw onions contain chromium to boost insulin production, quercetin, which fights off free radicals, and Vitamin C. Since most of the flavonoids are contained in the outermost layers of the onions, you should peel off as little as possible before chopping, dicing and tearing. So, in other words, don’t over-peel them! If raw onions give you heartburn or indigestion, consider cooked onions, another high prebiotic food.

As with raw onions, there are so many ways you can add cooked onions to your diet. They can be caramelized, braised, grilled or sautéed, for example. However, many would say there is no better way to have cooked onions than in a hot bowl of French onion soup , or roasted in the oven with delicious assortment of vegetables, a sprinkle of olive oil and some delicious herbs.

Raw asparagus is another great source of prebiotics, as it contains 5 percent fibre by weight. For many, raw asparagus is tough to eat, but a wonderfully tasty, and less tough, way is to eat this prebiotic food source is to ferment it. Alternatively, you could try blending raw asparagus into a smoothie.

Raw wheat bran is yet another prebiotic food source, and, like raw asparagus and cooked onions, it also provides 5 percent of prebiotics fibre by weight. You can enjoy the benefits of raw wheat bran by adding it to your morning cereal, by mixing it into your yogurt, or by blending it into your smoothies.

Wheat flour, when baked, provides a more flavourful, dense version of your favourite pastry. At 14 percent, it also contains a higher protein punch than its all-purpose flour counterpart, which has 11.7 percent protein.

The raw banana comes pre-packaged, making it a convenient prebiotic food to take with you wherever you go. Simply peel a raw banana and munch on it for a snack or before or after a workout. It’s also loaded with potassium ― just one cup of mashed banana provides you with 23 percent of your recommended daily value of potassium.

For a detailed look - see the chart alongside: Prebiotic Food Statistics

Raw or Cooked Prebiotics: Which Should You Use?

It’s not known exactly how much prebiotic fibre is lost when these foods are cooked, but it’s safe to assume the less they are heated, the more they will retain that healthy prebiotic fibre. So instead of cooking those dandelion roots, toss them in a salad and eat them raw.  However, if you must cook them, minimally steaming them will allow them to retain more of that prebiotic fibre than it would if you were to boil or sauté them.

Prebiotics: How Much Do You Need?

In order to realize the full effects prebiotics can offer, strive to consume at least 5 grams of prebiotic-dense foods a day. While you may be consuming prebiotic foods in your diet, there’s no guarantee you are consuming the suggested 5 grams a day minimum for achieving the optimal beneficial health effects. While you can certainly try to gauge the amount of prebiotics you are ingesting by  monitoring the types of prebiotic-rich foods you are consuming, there are factors that can impact the prebiotic fibre you are actually taking in. 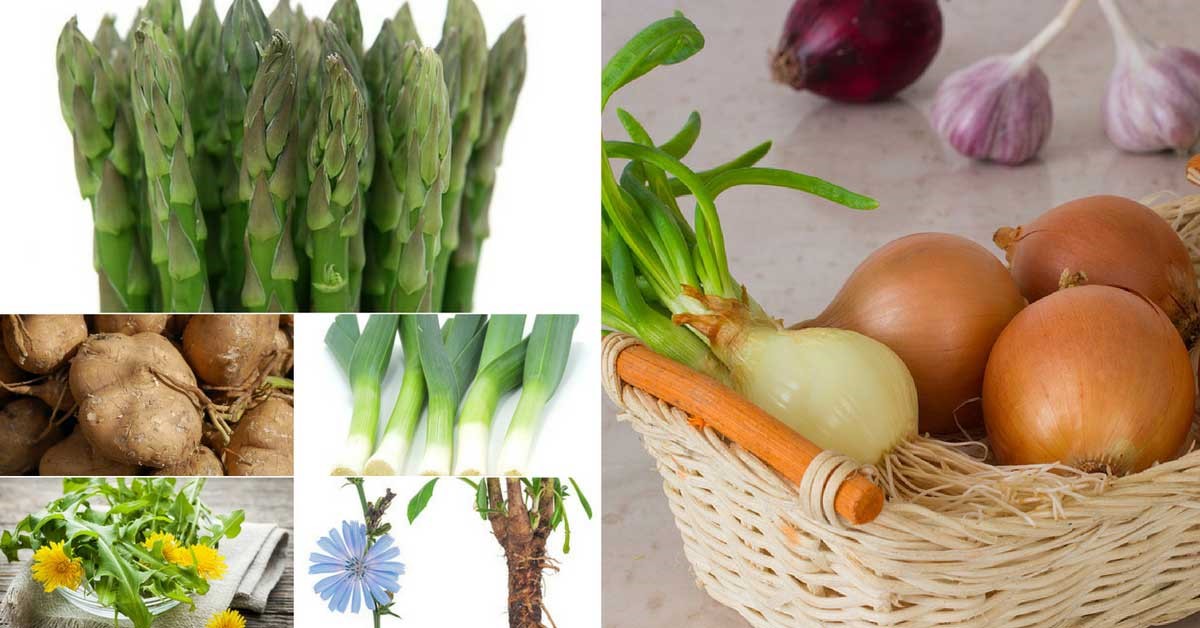 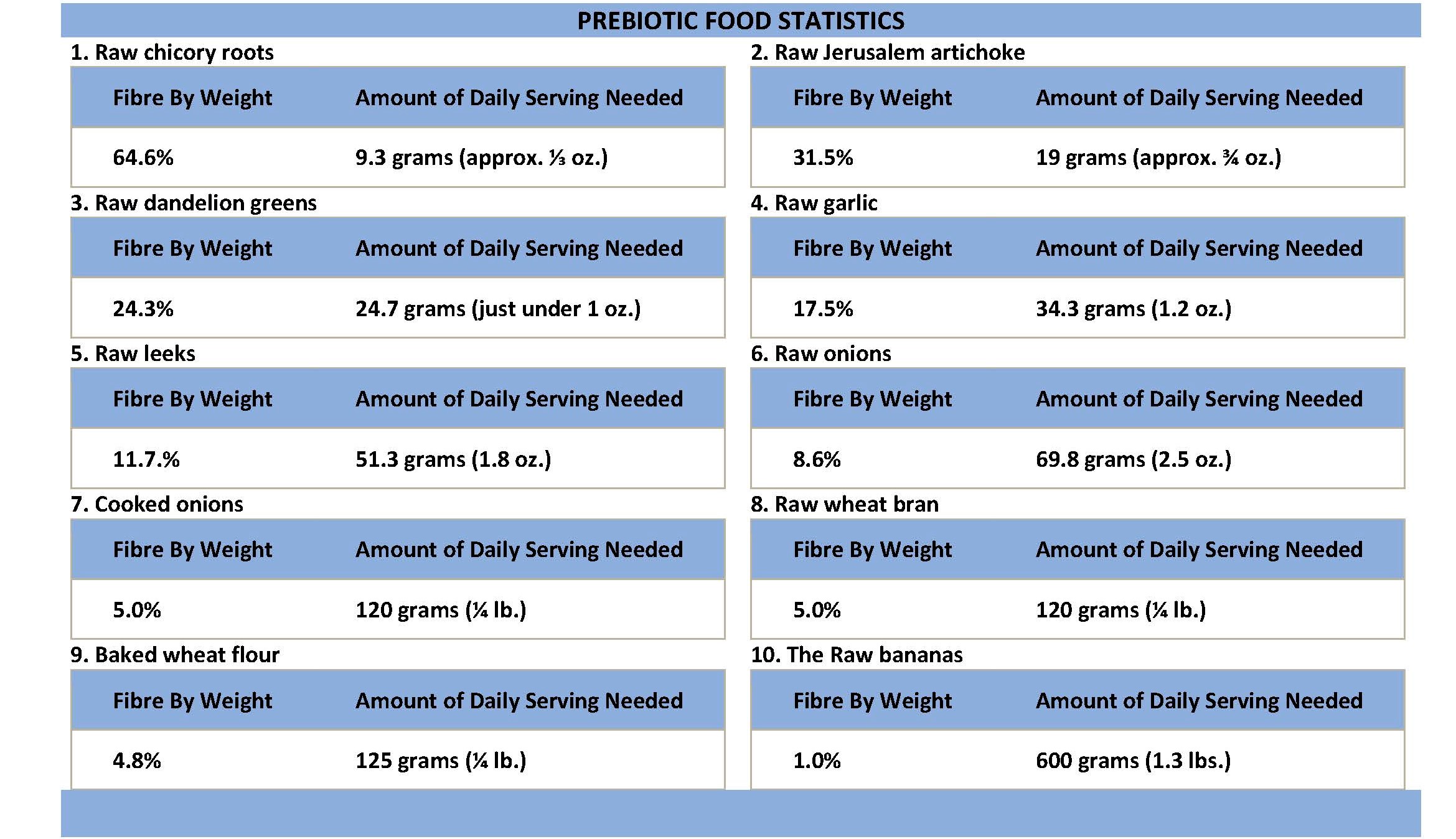