Of the members of the mint family under cultivation the most important are the several varieties of the Peppermint (Mentha piperita), extensively cultivated for years as the source of the well-known volatile oil of Peppermint, used as a flavouring and therapeutic agent.

Constituents: Among essential oils, Peppermint ranks first in importance. It is a colourless, yellowish or greenish liquid, with a peculiar, highly penetrating odour and a burning, camphorescent taste. It thickens and becomes reddish with age, but improves in mellowness, even if kept as long as ten or fourteen years.  The chief constituent of Peppermint oil is Menthol, but it also contains menthyl acetate and isovalerate, together with menthone, cineol, inactive pinene, limonene and other less important bodies.  On cooling to a low temperature, separation of Menthol occurs, especially if a few crystals of that substance be added to start crystallization.

What is Peppermint Tea?

Peppermint tea is an infusion made from peppermint leaves and is consumed as a tea. When you mix spearmint leaves to the tisane (infusion), you get a doublemint tea. This substance is caffeine-free, so people who suffer from sensitive sleep patterns like to drink this relaxing tea before bed.

The scientific name of peppermint is Mentha piperita, and it is actually a cross between water mint and spearmint. It is native to Europe, but the wide range of uses has made peppermint a global commodity. Peppermint tea is also similarly enjoyed around the world. Peppermint oil is a popular form of medicinal treatment, particularly for Irritable Bowel Syndrome (IBS).

The menthol flavor is very appealing to many people, making this one of the most popular tea varieties in the world.

Peppermint tea is a delicious and refreshing way to boost your overall health in a number of ways as it has the ability to improve digestion, reduce pain, and eliminate inflammation. It relaxes the body and mind, cures bad breath, aids in weight loss and boosts the immune system. Its impact on the digestive system is considerable, and the base element of menthol in this tea is perhaps the most valuable part of its organic structure.

Tea is known to be soothing, sure, but what else does this widely available tea have for our body in terms of benefits? Let’s explore some of the medicinal applications of peppermint tea below.

When we think of the sharp, cool effect of menthol, we don’t always think of a hot cup of tea. However, peppermint tea has menthol as a main component, so drinking the tea can cause external sweating, while the menthol cools down your body internally. This can essentially break a fever and reduce the associated inflammation and discomfort.

Peppermint oil and peppermint tea have been used for thousands of years to sort out a variety of digestive and gastrointestinal conditions. Archaeological evidence actually shows peppermint being used for 10,000 years as a dietary supplement. Peppermint tea is considered as a carminative because it helps to move gas through the body as it accumulates, rather than causing bloating, cramping, and stomach discomfort. This tea also stimulates bile flow to increase the rate and efficiency of digestion and promote healthy bowel movements.

It is not only a carminative but also an analgesic substance, so it reduces the associated pain of cramps, bloating, and indigestion. This is due to its calming effect on the intestines and smooth muscles of the digestive tract. Diarrhea, irritable bowel syndrome (IBS), and constipation can be cured with this tea, as it brings the entire system to optimal activity levels.

When it comes to being sick, few things are as unpleasant as being nauseous. Peppermint tea is an antispasmodic, so it reduces the chances of vomiting and nausea, even in the case of motion sickness on a boat or a plane. It also reduces the stomachache and queasiness associated with motion sickness with its anti-inflammatory qualities.

As an antispasmodic, it can relieve you of the irritating sensation that makes you want to cough, thereby exacerbating your respiratory condition. By relaxing the muscles of the throat and chest, you can eliminate the symptoms of cold and flu.

Peppermint tea has antibacterial properties against bacteria which are the cause of illnesses like fever, cough, and cold. Not only can drinking this delicious tea help you treat the symptoms of being ill, but also prevent your body from getting sick. There are also trace elements of vitamin B, potassium, antioxidants and calcium, which can help your body uptake nutrients to fight off illnesses and perform necessary functions to keep your body working in a healthy way.

The strong, mentholated flavor and antibacterial quality of peppermint tea make it an ideal way of improving your breath. The antibacterial element kills the germs that can lead to halitosis, while menthol in the tea overwhelms the foul smell and leaves your breath fresh and clean!

The aroma of peppermint oil and its organic components can help you control your appetite, so you can reduce overeating, and subsequently, prevent obesity.

The natural sedative or antispasmodic nature of menthol helps you get instant relief from mental stress. The anti-inflammatory nature can reduce your blood pressure and body temperature, and allow you to unwind and relax, letting your stress melt away. This is part of the reason why peppermint oil is so popular in aromatherapy and the effects from peppermint tea are equally similar.

Though peppermint tea is powerful and offers a wide range of health benefits, there are still some possible side effects of having this tea. The menthol can act as an allergen to some people and can cause heartburn in others. Both of the reactions are typically mild but consulting a doctor about possible allergies is always a good idea. Besides that, grab some peppermint leaves and get brewing! 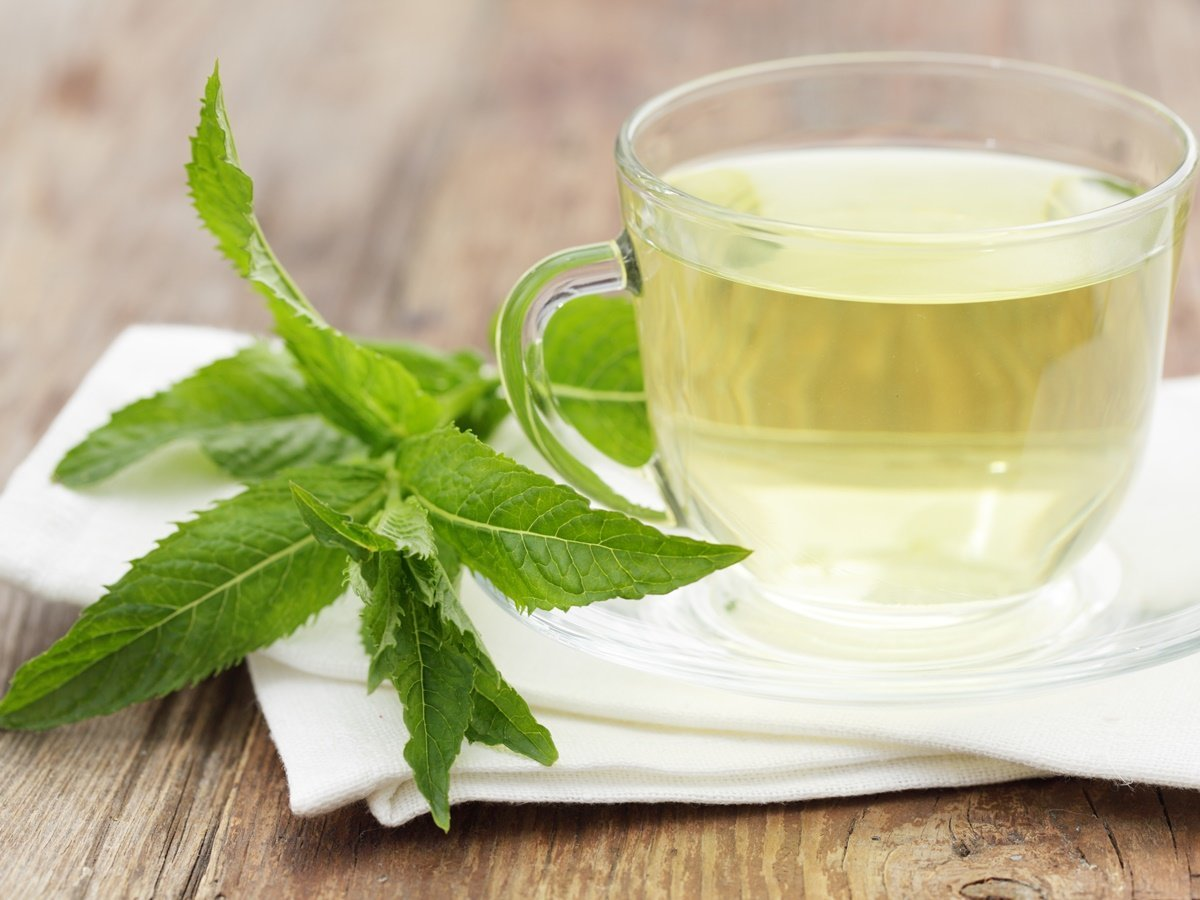 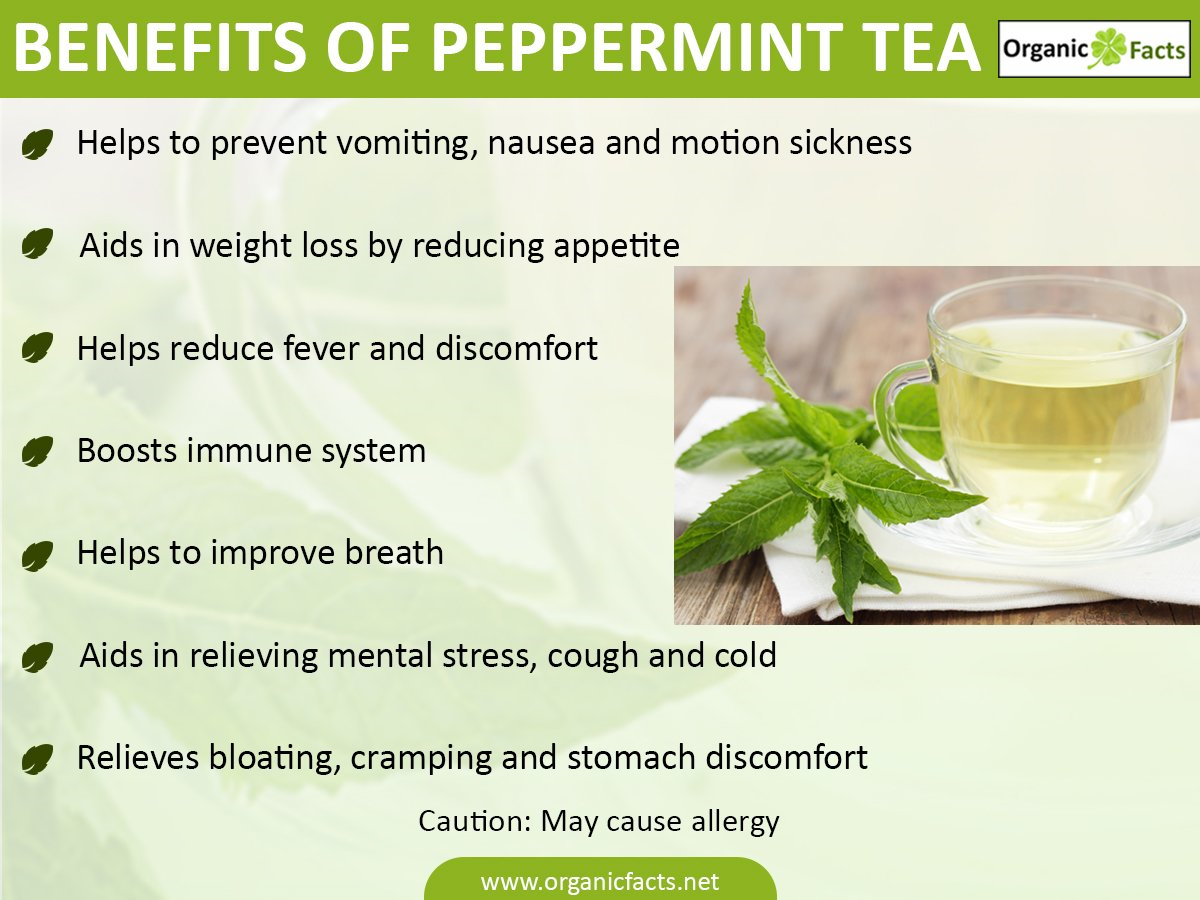