Parsley is an herb. The leaf, seed, and root are used to make medicine. Be careful not to confuse parsley with fool's parsley and parsley piert.

In foods and beverages, parsley is widely used as a garnish, condiment, food, and flavouring.
In manufacturing, parsley seed oil is used as a fragrance in soaps, cosmetics, and perfumes.

How does it work?

Parsley is a good source of folic acid, one of the most important B vitamins. While it plays numerous roles in the body, one of its most critical roles in relation to cardiovascular health is its necessary participation in the process through which the body converts homocysteine into benign molecules. Homocysteine is a potentially dangerous molecule that, at high levels, can directly damage blood vessels, and high levels of homocysteine are associated with a significantly increased risk of heart attack and stroke in people with atherosclerosis or diabetic heart disease. Enjoying foods rich in folic acid, like parsley, is an especially good idea for individuals who either have, or wish to prevent, these diseases. Folic acid is also a critical nutrient for proper cell division and is therefore vitally important for cancer-prevention in two areas of the body that contain rapidly dividing cells—the colon, and in women, the cervix.

While one study suggests that high doses of supplemental vitamin C makes osteoarthritis, a type of degenerative arthritis that occurs with aging, worse in laboratory animals, another indicates that vitamin C-rich foods, such as parsley, provide humans with protection against inflammatory polyarthritis, a form of rheumatoid arthritis involving two or more joints.

Its leaves and roots are used as condiments and garnish in dishes, but the plant also has medicinal properties. Parsley seeds are used as carminative, the oil is used in the regulation of menstrual flow, the roots serve as diuretic and the leaves used in treating insect bites, lice and skin parasites. Parsley leaf herbal supplements are presented as capsules to be taken at two or three times daily at mealtimes. The maximum daily dosage is 6 g.

The chlorophyll content of parsley leaf capsules makes it useful in maintaining a healthy digestion. These capsules are taken to strengthen and stimulate the digestive system when they are used to ease indigestion and flatulence. They also stimulate the appetite and contribute to efficient metabolism.

Apiol and myristicin in parsley are responsible for its diuretic activity. For this reason, parsley leaf capsules are taken to reduce bloat and improve urination. This diuretic activity makes the capsules great for detoxifying the body since improved urination contributes to faster elimination of toxins and gallstones in the body and prevents the re-absorption of salts in the kidneys. According to Drugs.com, the diuretic property of parsley is a result of its inhibition of the sodium/potassium pump.

A study done at Brigham and Women's Hospital and Harvard Medical School in 2009 established that the flavonoid, apigenin, found in parsley reduces the risk of malignant ovarian disease by 20 percent. Parsley leaf capsules are also a good source of vitamin C, an immune booster; the iron content is essential for formation of red blood cells; the potassium content helps lower blood pressure while calcium and manganese are useful in the management of osteoporosis.

DBM only makes use of parsley in their Kidney Support Tea.  For more information visit our Body Cleansing page and read up on Kidney Cleanses

Pregnancy and breast-feeding: Parsley in food amounts is fine, but parsley in larger medicinal amounts is LIKELY UNSAFE when taken by mouth during pregnancy. Parsley has been used to cause an abortion and to start menstrual flow. In addition, developing evidence suggests that taking An-Tai-Yin, an herbal combination product containing parsley and dong quai, during the first three months of pregnancy increases the risk of serious birth defects. If you are pregnant, stick with using only the amount of parsley typically found in food.  Not enough is known about the safety of using parsley in medicinal amounts during breast-feeding. It’s best not to use more than typical food amounts of parsley.

Diabetes: Parsley might lower blood sugar levels. Watch for signs of low blood sugar (hypoglycaemia) and monitor your blood sugar carefully if you have diabetes and use parsley.

Surgery: Parsley might lower blood glucose levels and could interfere with blood sugar control during and after surgical procedures. Stop using parsley at least 2 weeks before a scheduled surgery.

Parsley leaf capsules should be avoided by pregnant women because parsley causes uterine contraction at high doses. If you have liver or kidney disease, you need to see your doctor before starting on these capsules. Similarly, if you are allergic to carrots, celery or fennel, you could also be allergic to parsley and need to ask your doctor before taking parsley leaf capsules.

Moderate Interaction Be cautious with this combination

Minor Interaction Be watchful with this combination

As we are an educational site, it is our obligation to warn you of drug interactions. HOWEVER, it needs to be noted that our patients are weaned of pharmaceuticals so drinking parsley tea (for instance) is NOT likely to have ANY ill effects.  We do NOT prescribe any form of tablet or tincture containing parsley.  We use ONLY fresh parsley leaves. 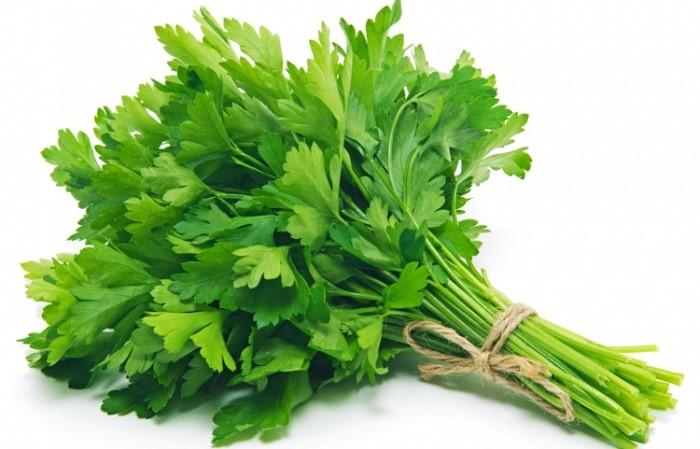 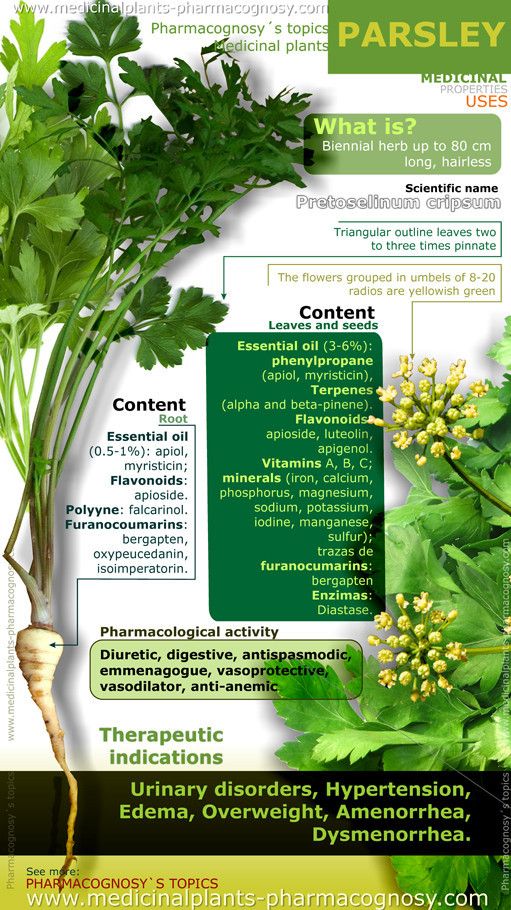