Paprika originated in South America but is associated with Hungary, where much of the best paprika is produced today. It's believed that ethnic groups fleeing from the Turks introduced peppers to the Balkans and by the 17th century the first pepper plants arrived in Hungary. Within a century, paprika was used commonly in Hungarian cooking and it's the primary ingredient in the country's most famous dish: goulash. It's also used in chicken dishes and to spice meat. In Spain, paprika is used to flavour shellfish dishes, rice, tomato and green pepper salads. The Spanish, Portuguese and Turkish use it for soups, stews and casseroles, and it's often used as garnish for salads, appetisers and eggs. Paprika ranges in colour from bright red to brown, and the flavour can be anything from mildly sweet to very hot, depending on the type of pepper used. The standard paprika is sweet, while the hot paprika gives your taste buds a jolt. Paprika releases its colour and flavour when heated, so stirring it into a little hot oil before adding it to food will improve its appearance and taste.

You are missing an opportunity to boost flavor and nutrition if you use paprika as nothing more than an added dash of color sprinkled over deviled eggs or potato salad. You don't need to use a lot of paprika to benefit from it. Even a small amount delivers antioxidants and nutrients. 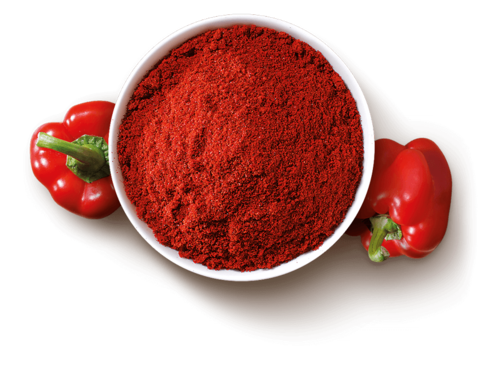