There are numerous pancreas-related health problems, although three in particular are well-known, including pancreatic cancer, pancreatic insufficiency, and both acute and chronic pancreatitis.

Pancreatic cancer is a life-threatening illness. The National Centre for Biotechnology Information states that, in over 80 percent of patients, your pancreatic cancer has metastasized, or spread to other parts of the body, by the time one is diagnosed.

Pancreatic insufficiency is a condition in which the pancreas no longer produces sufficient levels of insulin often causing a secondary chronic illness, diabetes while pancreatitis is the inflammation of your pancreas.

The pancreas requires periodic cleaning and prevention. The most appropriate time to carry out cleaning the pancreas is the second half of the year.

Thereafter, approximately 4 weeks later they can begin with rectifying the pancreatic functions.

Before recommending a pancreas cleanse, patients must first undergo a liver cleanse.

How to Cleanse/Detox the Pancreas

The pancreas is an essential organ in the digestion and enzyme production process.  If it is toxic or inflamed, it is difficult to digest food well, which is why it is to do a depurative diet once in a while.

Depurative Diet for the Pancreas

Diet is always the first factor that can cause one or more of the body’s organs to fail. Also, the external elements from the environment can change its functionality.  All this can lead to hormonal imbalances in the pancreas and diseases such as diabetes.

The first step in beginning a pancreas cleanse is to ensure patients have eliminated alcohol, tobacco, and all junk food from their diet.   This includes the removal of the consumption of white flour, sugar, sweets and other processed foods.

Taking a hot shower or bath every day stimulates the digestion and improves the health of your pancreas. It stimulates and activates its functioning.  Ideally patients should take a hot bath before going to bed. It will relax them an allow them to fall asleep better and will reactivate the functionality of the pancreas.

Keep in mind that going through periods of anxiety or stress will raise levels of the cortisol hormone. Negative emotions and worries change one’s basic functions and affect digestion for example, which increases the risk of the intestines and colon becoming inflamed.   All of these factors cause the pancreas to worsen and release enzymes into the stomach. Patients should try various methods to relax, seek time for themselves, walk and eat well.

Aspects to consider when creating an eating plan for patients with chronic diseases as well as pancreatic cancer.  Recommend the following to your patients:

Carbohydrate containing foods affect blood sugar levels.  Foods that have a high GI rating have been linked to the development of pancreatic cancer. This link is thought to be related to the ability of high GI foods to stimulate the production of insulin and insulin-like growth factor (IGF), two hormones that have been shown to stimulate tumor proliferation and progression and to speed up the spreading of pancreatic cancer within the body. Most legumes, non-starchy vegetables, and fruit have a low GI rating, while most refined carbohydrate containing foods are rated high on the Glycemic Index.

More than hundred years ago John Beard, a Scottish doctor, discovered that one of the body's best defense mechanisms against cancer is pancreatin, a mix of enzymes that are also involved in the digestion of proteins. High protein diets keep the pancreatic enzymes busy digesting protein, and therefore these enzymes cannot focus on their other key task, the eradication of cancer. While a certain amount of protein is necessary for the proper functioning of the body, you should avoid protein from animal sources if you want to reduce your risk of pancreatic cancer. Some nutritionists suggest that the body needs a protein-free period of approximately 12 hours a day in order to effectively fight cancer, such as pancreatic cancer.  A WFPB diet provides the body with sufficient protein daily.  Adding protein in the form of ‘meat’ increases the risk of cancer.

#3: Ensure a Sufficient Intake of I3C

Cruciferous vegetables — such as broccoli, cabbage, cauliflower, kale and Brussels sprouts — are well recognised for their anti-tumor and anti-cancer properties. These properties are largely attributable to indole-3-carbinol (I3C), a natural compound that occurs in cruciferous vegetables when the plant cell walls are broken through chopping, crushing, or chewing. I3C helps detoxify harmful substances, such as carcinogens that could cause pancreatic cancer, and destroy free radicals.

#4: Ensure a Sufficient Intake of Curcumin

Curcumin is a phenolic compound that gives turmeric its bright yellow color. Curcumin has been used, in the form of turmeric, in traditional Chinese and Indian medicine for centuries to prevent and treat a wide range of health problems. In recent years, also western medicine has started to pay greater attention to this extraordinary phytochemical which, according to recent research, can provide protection against almost any type of cancer, including pancreatic cancer.

In one study, researchers found that curcumin could inhibit the production of interleukin-8, a special protein produced by white blood cells that contributes to the development of pancreatic cancer. Furthermore, curcumin has been shown to effectively destroy free radicals and to prevent nitrosamine formation (nitrosamines are considered potential human pancreatic carcinogens).

Ellagitannin, which the body converts into ellagic acid, is present in many red fruits and berries, raspberries being a particularly good source of this extraordinary cancer combating compound.

Nitrates are natural substances that are present in the soil, air, surface water, ground water, and plants. Nitrates are also used to give processed meat products a deep red color. The nitrates in food can be converted by the body into nitrites, which in turn form nitrosamines. Nitrosamines have been found to induce pancreatic cancer in animals and are considered potential human pancreatic carcinogens. Luckily, nitrosamine formation can be inhibited by certain antioxidants, such as vitamin C and vitamin E.

As most vegetables are packed with antioxidants, nitrosamine formation is usually not a concern when you eat good wholesome organic WFPB diet high in fruit and vegetables.

#7: Avoid Foods That May Be Contaminated with Aflatoxin

Patients should be careful when selecting Nuts, Grains and Legumes. Carcinogenic substances can occur in foods when certain fungi that grow on food produce toxins during processing and/or storage. These toxins include aflatoxins — poisonous substances that have been shown to cause liver cancer and that have been postulated to pose an increased risk for pancreatic cancer. Peanuts appear to be particularly susceptible to contamination with aflatoxins, (DBM does not include peanuts in any form in their programs) but also many other types of foods, including whole grains, legumes, nuts, and spices are vulnerable to the fungus producing aflatoxins. These poisons are resistant to cooking and freezing, but care in selecting their foods can greatly reduce the risk of exposure to these toxins:

Vitamin D is well known for its role in maintaining strong bones by promoting calcium absorption in the body, but in recent years vitamin D has also been heralded for its potentially protective effects against pancreatic cancer. The protective effect of vitamin D against pancreatic cancer is based on the vitamin's ability to block the proliferation of cancerous cells. The best vegan food sources of vitamin D include egg yolks.  We however prefer the most natural source of all – the exposure to regular SUNLIGHT.

A high dietary intake of animal fat has been associated with an increased risk of pancreatic cancer. One study found that the study participants with the highest intake of animal fat had a 43% increased risk of pancreatic cancer compared with the lowest intake group. One substance that is thought to play a major role in this context is arachidonic acid, a type of omega-6 fatty acids that is abundant in fatty red meats and

organ meats. This omega-6 fatty acid appears to stimulate cancer cell growth and to facilitate the spread of pancreatic cancer within the body.

Evidence suggests that arachidonic acid may also be able destroy cells of the immune system involved in the protection against pancreatic cancer. Omega-3 fats — found in salmon, mackerel, flaxseed, walnuts and a few other foods — are believed to inhibit the growth of pancreatic cancer. However, also omega-3 fats can be harmful if consumed in excess as all dietary fat stimulates the production of bile which may be converted into apocholic acid, a proven carcinogen, if a lot of fat stagnates in the large intestine for too long. This information has led us to recommend that you NOT eat red meat and restrict your total fat intake to approximately 20% of total caloric intake per day.  A well-balanced combination of omega-3, 6 and 9 fats are essential but excessive amounts will throw this vital ratio out and cause more problems, health-wise.

#10:  Ensure a Sufficient Intake of Vitamin C and E

Vitamins C and vitamin E scavenge free radicals and boost the immune system, which may reduce the risk of pancreatic cancer. In addition, vitamin C and vitamin E can inhibit the formation of nitrosamine, a substance that has been found to induce pancreatic cancer in animals and that may cause pancreatic cancer also in humans. However, the impact of vitamin C on nitrosamine formation might be relevant only if there is no fat in the stomach.  Ensure that you eat a good range of vegetables and fruits that will provide you with a source of Vitamin C that is easily assimilated by the body.  These fruits and veggies are: Bell peppers, guavas, dark leafy greens such as kale, broccoli, ORGANIC strawberries, citrus fruits such as oranges and grapefruits, cooked tomatoes, mange tout peas, papaya and spinach.

#11:  Ensure a Sufficient Intake of B Vitamins

Vitamin B is a complex of several vitamins that often work together and co-exist in the same foods. Research suggests that a sufficient intake of the B vitamins, particularly of vitamin B6 (pyridoxine), vitamin B12 (riboflavin) and vitamin B9 (folate), could reduce the risk of pancreatic cancer for people who are at normal or below normal weight. However, evidence indicates that B vitamins may not be protective against pancreatic cancer when obtained through vitamin supplements. Therefore, it is important to include plenty of foods rich in these vitamins in the diet.

#12:  Ensure a Sufficient Intake of A and Carotenoids

A large and compelling body of evidence suggests that there is an inverse relationship between the risk of cancer and the consumption of foods rich in vitamin A and carotenoids. Carotenoids, which are precursors to vitamin A, are found in many orange, yellow, and green fruits and vegetables including carrots, sweet potato, cantaloupe, spinach, kale, and collard greens. The most common carotenoids in the Western diet include beta-carotene, lycopene, zeaxanthin, and lutein. The protective effects of dietary vitamin A and carotenoids have been shown to be particularly strong for lung cancer, but also the risk of pancreatic cancer may be reduced by including a variety of carotenoid-rich foods in diet.

Besides good healthy clean food, another way to provide gentle on-going support to the pancreas is to drink Bay Leaf Tea, Ginger and green teas (reduces inflammation, cleanses the body and is a sedative and antioxidant for the pancreas).  A simple licorice infusion is a digestive root that boosts the production of bile to aid in the digestion process.

This tea is the foundation of the pancreas cleanse

Avoid in pregnancy as bay leaf tea is a uterine stimulant

This list of foods will help to prevent and fight cancer in the pancreas. 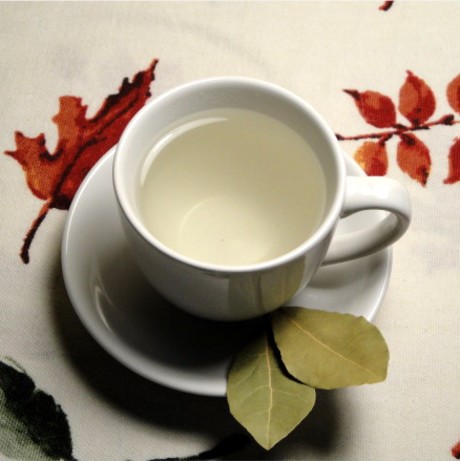