Allium cepa is the common onion. Although it is usually thought of as a vegetable, A. cepa also has a long history of medicinal use.  Onions are perennials that are cultivated for food worldwide. There are many varieties. Most onion bulbs are white, yellow, or red. The green stems and leaves are hollow and can reach 3 ft. (1 m) in height. The plants bear small flowers that are usually white or purple. The fleshy bulb that grows below the ground is used medicinally as well as for food. Onions are members of the lily family.

Onion has been used as a food source for almost as long as humans have been keeping written records. Their usefulness has been discovered independently by many cultures on several continents. Onions are mentioned in ancient Egyptians in addition, many of these properties have been found in garlic (A. sativum) which is a close relative to onion.

In 1990, scientists detected the presence of a compound in onion that partially blocks the development of inflammation. In addition, laboratory animals were protected against induced asthma with fresh onion juice. Humans with asthma have also shown reduced allergy-induced constriction of the airways when given an extract of onion. These findings support the traditional folk administration of onion to treat asthma and respiratory complaints.  Some test-tube and small animal studies suggest that onion oil can stop the growth of tumours. Whether these results are applicable to humans remains to be seen, but in a 1989 study done in China, people who ate large amounts of vegetables in the Allium family appeared to have a significantly reduced rate of stomach cancer.

Onion has also been shown to contain antioxidants, which are compounds that protect the body against free radicals. Free radicals are highly reactive molecules that destabilize other molecules and are associated with a number of degenerative diseases.

The German Federal Health Agency’s Commission E, established in 1978 to independently review and evaluate scientific literature and case studies pertaining to herb and plant medications, has approved onion as an antibacterial agent. Although many studies are promising, more information is needed before this endorsement is extended to other uses of onion. In general, however, it appears that onion is a healthful vegetable that may confer many medical benefits.

No special precautions are needed when taking onion medicinally.

Although no allergic reactions to the bulb of the onion are reported, some people develop an allergic rash after handling the leaves of the plant. In addition, windblown particles of onion leaves and skin have been shown to irritate the eyes of farm workers employed to harvest the onions.

There are no studies of the interaction of onion and conventional pharmaceuticals. However, given the long and widespread use of onion as a vegetable, serious interactions appear unlikely. 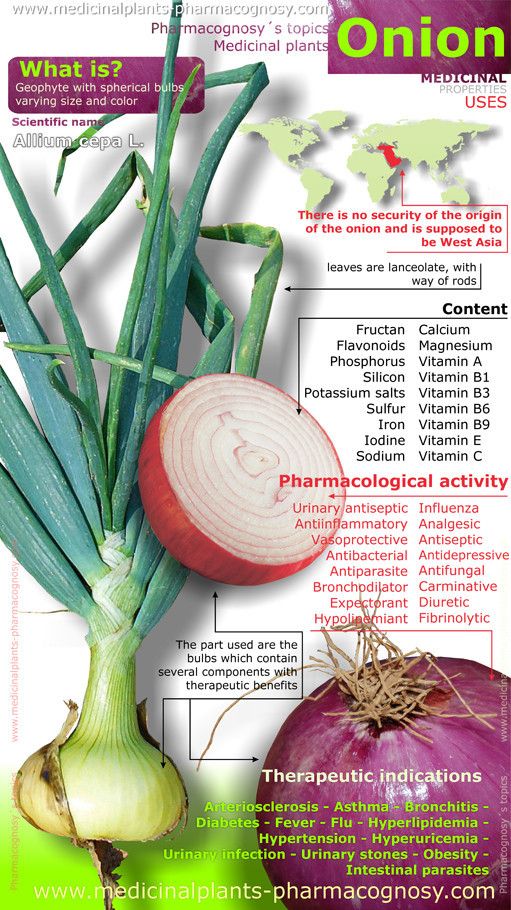