Wars have been fought over nutmeg and it was once one of the most expensive spices in the world. The Arabs were the exclusive importers of nutmeg to Europe until 1512, when the Portuguese and then the Dutch claimed the Banda Islands of Indonesia, on which nutmeg trees were found. The French smuggled nutmeg seeds off the islands to start new plantations and through the British, nutmeg spread to the Caribbean. A sixteenth century monk is on record as advising young men to carry vials of nutmeg oil and at the appropriate time, to anoint their genitals for virility that would see them through several days. Tucking a nutmeg into the left armpit before attending a social event was also believed to attract admirers. Nutmegs were often used as amulets to protect against a wide variety of dangers and evils; from boils to rheumatism to broken bones and other misfortunes. In the Middle Ages carved wooden imitations were even sold in the streets.

People carried nutmegs everywhere and many wore little graters made of silver, ivory or wood, often with a compartment for the nuts. Nutmeg has long been lauded as possessing or imparting magical powers. The nutmeg tree produces a fruit like an apricot, when this bursts open the seed kernel inside is the nutmeg and the lacy scarlet covering on the kernel is mace. Mace has a sweeter and milder flavour than nutmeg, which is not actually a nut. Both are predominantly used in baking sweet dishes and have a warm, spicy and sweet flavour. The nutmeg kernel is dried out then sold whole or ground into powder. If stored correctly whole nutmeg will last indefinitely. The first harvest of nutmeg trees takes place 7-9 years after planting, and trees reach full potential after 20 years.

Nutmeg contains an essential oil which is a colourless or light yellow liquid. It's used in toothpastes, cough syrups, perfumes and cosmetics, it's also mixed with almond oil and used externally to relieve rheumatic pain and clear up eczema. It's important to note that this oil, which is used in medicine, is highly toxic and should only be consumed in very small quantities. Nutmeg aids digestion and stimulates the appetite and can reduce vomiting, nausea and general stomach uneasiness. 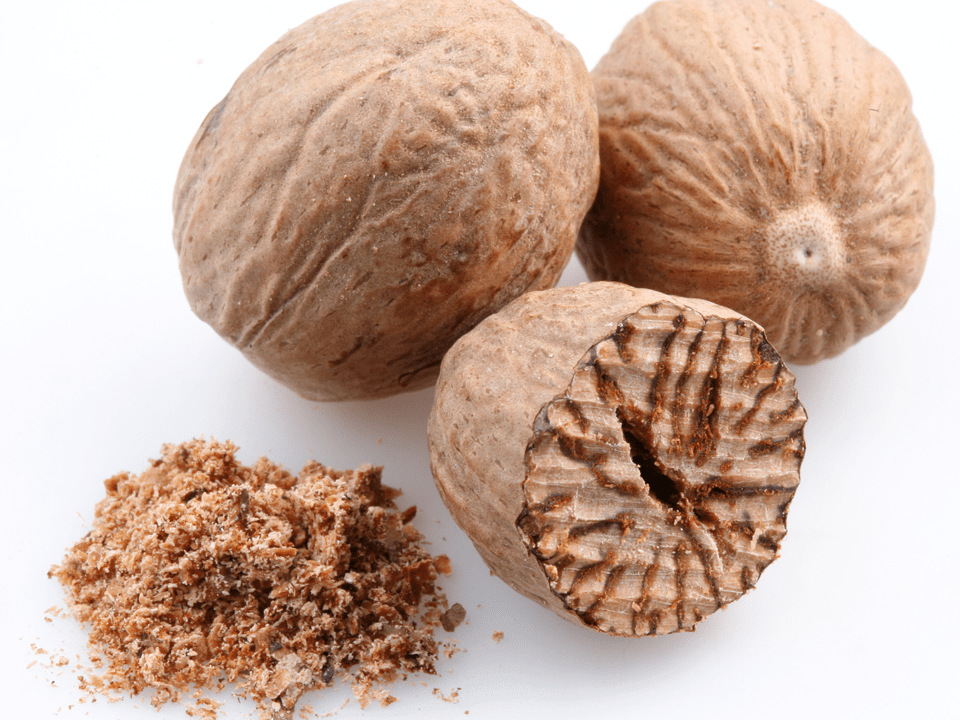 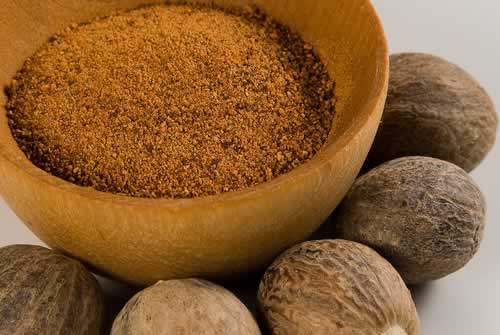