"Cancer risk among people drinking chlorinated water is 93% higher than among those whose water does not contain chlorine." Are we thus to understand that, out of the 2 1/2 million people who develop cancer in the U.S. each year, nearly half are getting cancer from the effects of chlorinated water? Or that, of the 560,000 who die each year from cancer, chlorinated water could have been the main factor causing nearly half of those deaths?

Consistent with the research showing a connection between acidity and cancer, it turns out that chlorine is extremely acidic, and ingesting it creates conditions that the body counters by stealing elements such as calcium from the body's stores, and also lowers the oxygen level within the body. Chlorine also kills the priceless friendly bacteria in the colon. Too, when showering or bathing, a person consumes (by breathing) even more chlorine than by drinking the water. The chlorine gas is absorbed in the lungs directly into the blood without being filtered or neutralized.

Food grade hydrogen peroxide - H2O2 - could be used in water purification instead of chlorine. It's healthy for the body and kills harmful bacteria ten times faster than chlorine. God made hydrogen peroxide and put it in our rainwater at the rate of 3 to 5 parts per million. H2O2 has been used on the sick for years because it contains oxygen and hydrogen and simply works.

The body's "killer" cells use hydrogen peroxide (hydrogen & oxygen) to combat every single type of invading and infectious organism: viruses, bacteria, parasites, yeast and it even destroys cancer, according to Otto Warburg's research.

Whilst some water treatment plants still use chlorine, many are now using chloramines – a group of chemical compounds containing both chlorine and ammonia.  The reasoning behind this change was that chloramines do not react with organic matter in the water and thus results in fewer trihalomethanes (THM) forming during the disinfection process.  This change however, does not make it any safer as other toxic byproducts which have not yet been fully examined are formed during this disinfection process.

Chloramines, unlike chlorine, do not readily dissipate and they cause nitrate levels in the water to increase.  Our concern is for those people that still have copper/lead pipes conducting the water into their homes.  This release of ammonia during the chloramination process corrodes lead and copper. Studies are being conducted to determine if chloramine is at fault for increased lead exposure. To prevent corrosion, and therefore increased lead exposure, substances called orthophosphates are added to the water supply.  However, corrosion control methods can either be ignored or seriously flawed, and all too often people’s lives are damaged by the effects of lead as we have seen with the tragic stories coming out of Flint, Michigan.

Can I use 3% peroxide instead?

Taking a hydrogen peroxide bath is like giving yourself an oxygen supplement. There is speculation that we can absorb some of the oxygen through our skin. It's said that a peroxide bath is very detoxifying.  Some people report problems like headaches and loose stools after bathing with peroxide. Many times people take these symptoms as "detox reactions" - the body doing some housecleaning with the extra oxygen you've provided.

Hydrogen peroxide baths are not a treatment or prevention for disease. But, as I said, a peroxide bath is said to be a way of taking in oxygen - a supplement of oxygen.  Food grade peroxide doesn't have the stabilizers that most other kinds of peroxide have. Food grade is "cleaner". You could use any kind of peroxide - various kinds have different stabilizers. (If using a different kind, be sure to check the percentage (concentration) so that you are using an equivalent amount).  You can also use salt or essential oils along with the hydrogen peroxide, such as Epsom salts, essential oils, and herbal infusions.

If you do not have any HP 35% Food Grade readily available, another quick way to remove chlorine and chloramines from your bath water is to use a Vitamin C (ascorbic acid) tablet.

Chlorine and chloramines are inhaled as the water vapours from the hot water rise from the tap / bath, and are inhaled.  Usually in winter we keep the bathroom door closed so as to avoid drafts – we are essentially trapping ourselves in a chloramine mist.  It is important if you do not have the means to neutralise the chlorine in your bathtub to keep the windows open until the bath is filled.  Yes, a draftier situation, but it will certainly minimise the toxic fumes.

While Vitamin C is not the only way to neutralize the chlorine in bath water, it is the easiest way to address chloramines in our water supply.  Vitamin C reduces chlorine and chloramines in both hot and cold water.  Vitamin C reacts with chlorine very quickly and it is incredibly easy to neutralize an entire bathtub full of water almost instantly with 1000mg. of Vitamin C.  While Ascorbic acid may make the water slightly acidic, this can be beneficial to the skin as it helps to keep our skin’s natural acid mantle intact.  Vitamin C also washes away without any harmful effects on our water supply or aquatic life.

For more information on Natural Sources of Vitamin C, follow this link. 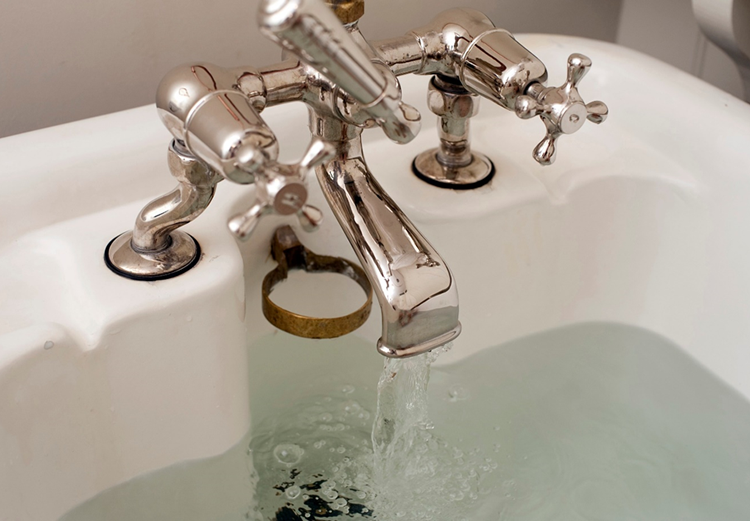