Mustard is a versatile cruciferous vegetable which belongs to the Brassica family just like broccoli and cabbage. Native to the temperate areas of Europe, it was amongst the earliest grown crops in the region. From about thousands of years, mustard plant has been quite popularly cultivated in North Africa, Asia, and Europe more like an herb, and was even popular amongst the ancient Greeks and Romans.

Mustard is one of the oldest spices in the world and one of the most widely used. The Chinese were using mustard thousands of years ago and the ancient Greeks considered it an everyday spice. The first medical mention of it is in the Hippocratic writings, where it was used for general muscular relief. The Romans used it as a condiment and pickling spice and King Louis XI would travel with his own royal mustard pot, in case his hosts didn't serve it. Today, world consumption of mustard tops 181 million kilograms. Mustard is a condiment made from the seeds of a mustard plant.

It is a multi-talented botanical with many different varieties. Three variants out of these varieties namely white mustard (Brassica alba,) black mustard (Brassica nigra), and brown mustard (Brassica juncea) have gained more popularity over the others and are commercially grown and used for their young flower stalks, leaves and seeds. White mustard or sometimes referred to as yellow mustard has a milder taste and is normally used in the preparation of the famous American yellow mustard condiment. Black mustard is popular for its strong aroma and flavor while, brown mustard which is also used to prepare Dijon mustard, offers a sharp pungent taste.

Mustard plant brings an entire gamut of helpful constituents through its various edible parts. Seeds of its plant are rich source of minerals such as calcium, magnesium, phosphorous and potassium. Along with this, it is a good source of dietary folate and vitamin A. Mustard greens or leaves of mustard plants are excellent source of essential minerals including potassium, calcium and phosphorous. It is also a good source of magnesium and dietary fiber. Immense wealth of vitamin content offered by mustard green includes profuse amount of vitamin A and vitamin K with folate and vitamin C also present in decent amounts.

Phenolic components and other valuable nutrients present in different parts of the mustard plant such as seeds, leaves, and oil collectively offer a magnitude of health benefits with a unique flavor. Efficacy of mustard plant for therapeutic usage has been discussed as below:

Prevents Cancer
Being a member of Brassica family, seeds of mustard plant contain generous amounts of healthy phytonutrients called glucosinolates which can prove valuable against various cancers such as bladder, colon, and cervical cancer. Glucosinates break down to form isothiocyanates with the help of myrosinase enzymes present in mustard. Various studies have suggested regarding the anti-cancer effects of these components present in its seeds which inhibit the growth of cancer cells and even guard against the formation of such malignant cells. The chemopreventive properties of its seeds help in restoring the levels of glutathione and stimulate the induction of apoptosis without affecting the normal healthy cells.

Treats Psoriasis
The tiny mustard seeds are effective against Psoriasis which is a chronic inflammatory autoimmune disorder. Research studies have validated its effectiveness in curing the inflammation and lesions associated with Psoriasis. According to the study, treatment with its seeds also stimulates the activities of good enzymes such as superoxide dismutase, glutathione peroxidase and catalase which encourage protective and healing action in such diseases.

Relieves Contact Dermatitis
Mustard seeds offer therapeutic relief in contact dermatitis. Investigative research has suggested that consumption of its seeds helps in healing the symptoms associated with contact dermatitis such as healing of tissues and reduction in the ear swelling.

Improves Cardiovascular Health
Mustard oil is a hearty choice when it comes to choosing cooking oil. Studies conducted to assess its effects on the patients suspected of acute myocardial infraction or heart attack in simpler terms have demonstrated positive results with respect to reduction in the rate of cardiac arrhythmia, decrease in the ventricular enlargement and the chest pain associated with the disorder. The cardioprotective properties of mustard oil possibly attribute to the presence of omega-3 fatty acids among other helpful components.

Relief from Respiratory Disorders
Mustard seeds have been valued for their therapeutic effects in curing cold and sinus problems. It is a wonderful decongestant and expectorant which helps in clearing the mucus in the air passage. In Ayurveda, its seeds are considered as the food with warmer tendency and are prized for its healing effects in calming vata and kapha. From many years, different home remedies have involved the usage of mustard seeds or oil for treating a range of sinus related ailments such as addition of ground mustard seeds in a foot soak assists in releasing the congestion caused in the respiratory organs, gargling with tea made of mustard seeds aids in soothing sore throat to name a few. The heating qualities of this plant penetrate deeply inside the tissues and clean the excess mucus buildup. These heating qualities of mustard also call for a cautionary advice with regard to the burning sensations which may happen to the exposed tissues that are not concealed.

The seeds have also been found effective in curing chronic bronchitis. During an asthmatic attack, massaging a mix of mustard oil and small amount of camphor promotes easy breathing by breaking down phlegm. Plaster or poultice made of its seeds have been used since olden times for treating bronchitis and stimulate healthy blood circulation in the body.

Cures Aches
Poultice or plaster made from mustard seeds helps in curing pains and spasms as well. Mustard has rubefacient properties and hence when applied as a plaster, exercises analgesic effects and provides relief in the paralysis of limbs, rheumatism and other muscular aches. Another important advice to note here is that mustard plaster has warmer effects and may cause sore blistering if applied directly on the naked skin. To avoid that, linen sheet should be used amidst the skin and the plaster.

Poison Repulsion
Mustard seeds possess protective emetic qualities which resist the effects of poison on the body. A decoction made with its seeds helps in cleansing the body especially if the poisoning is caused by narcotics and excess intake of alcohol.

Treats Ringworm
Anti-bacterial properties of mustard seeds have been proven effective in curing the lesions caused by ringworm. Topical application of a paste made of mustard seeds on a clean skin washed with warm water helps in soothing the symptoms associated with ringworms.

Skin and Hair Care
It serves as a wonderful beauty aid as well. Henna leaves boiled with mustard oil help stimulate healthy hair growth. Its seeds roasted in sesame oil or coconut oil enrich the resultant and sieved oil and makes it an effective cure for acne and promote a clearer complexion.

Healing Effect on Nerves
As mentioned above, the mustard plant has heat inspiring nature which may benefit some individuals suffering from nerve damage. It helps in stimulating the healing process by arousing the impulses and has an invigorating effect on the nerves.

Controls Diabetes
Mustard leaf is excellent for diabetics. Studies have demonstrated the anti-oxidation activities of a mustard plant which helps in neutralizing the effects of oxygen free molecules and protects against the damages caused by oxidative stress in diabetics. The study shows that administration of mustard oil helps in reducing the levels of glycosylated proteins and serum glucose. It aids in reducing lipid peroxidation and stimulates glucose metabolism.

Cholesterol Lowering Ability
Leaves of the mustard plant have tremendous cholesterol lowering power. Studies have shown that cruciferous vegetables such as mustard greens have amazing ability to bind bile acids in the digestive tract which facilitate easy excretion of these acids from the body. The bile acids usually comprise of cholesterol, so ultimately the binding process helps in reducing the cholesterol levels of the body. Another noteworthy fact here is that steamed version of mustard green has better bile acid binding as compared to raw version. So steam them lightly, may be, add a little roasted cumin, salt, and pepper and enjoy.

These greens are a nutritional powerhouse that is instrumental in reducing the development of blockages in the arteries and prevent disorders like atherosclerosis. Vitamin B6 content present in these greens prevents the platelets from clumping and moderates the risk of thrombosis.

Treats Menopause
Mustard greens may prove valuable for women during the menopausal phase. Magnesium along with calcium present in it encourages bone health and prevents bone loss associated with menopause. It helps in recompensing the low magnesium content in bones and other magnesium deficiencies and may help reduce the risk of osteoporosis in menopausal women.

Aids in Detoxification
Mustard greens may help support the detox system of the body attributing to the presence of powerful antioxidants and fiber content. Glucosinolates present in it helps in regulating the action of detoxification enzymes and help to eliminate the harmful toxins from the body.

As mentioned above, a mustard plant has a tendency to generate heating effects so, caution while usage on the skin especially sensitive skin is recommended. Generally, it is always advisable to be naturally cautious while trying it for anything for the first time, especially when you are not aware of the allergic reactions such as hypersensitivity to mustard seeds. Some of the known side effects are:

Uncooked mustard seeds and leaves contain a substance called goitrogens which may mess up with the functioning of the thyroid gland. People already suffering from thyroid disease should always cook the mustard prior consumption to neutralize these components.

Mustard contains oxalate which is known to interfere with the absorption of calcium. Individuals already suffering from oxalate related disorders such as kidney stones should be watchful regarding the overconsumption of mustard.

It is an energizing vegetal which is effectual in relieving stiff muscles, aching joints, congested phlegm, tumors and pneumonia. Mustard seeds have also been considered valuable in treating the convulsions in children. Powdered mustard helps in relieving pain and discomfort caused during menstruation and stimulates blocked flow due to climatic reasons. It also assists in stimulating the metabolism and helps shed off extra fats. Its greens have very good amount of vitamin A which may help in promoting eye health and contains fiber which helps in digestion. Nutritional power of magnesium present in mustard helps in sustaining healthy tone and functioning of blood vessels. You would want to include mustard in your diet to get that much-needed fire. 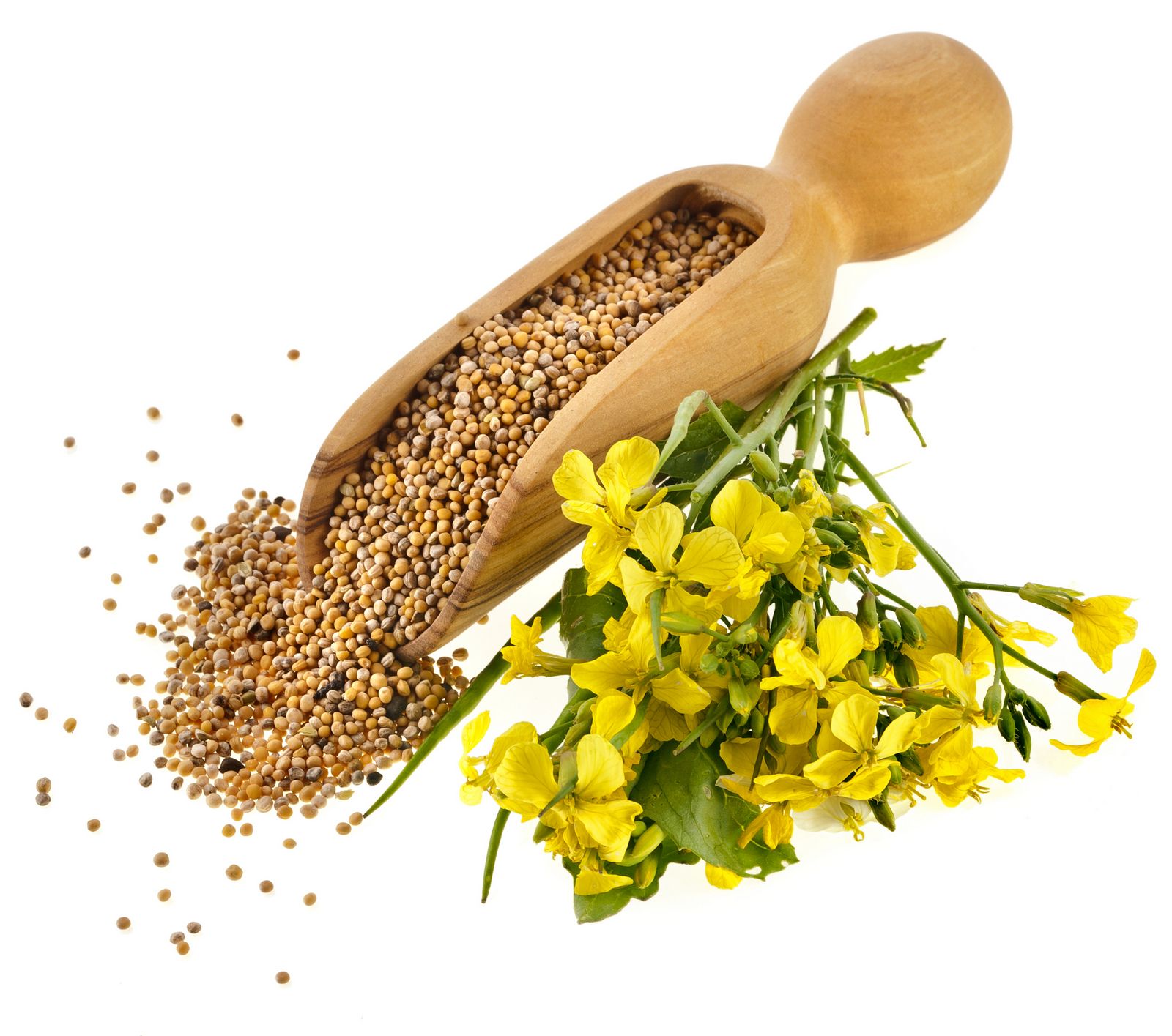 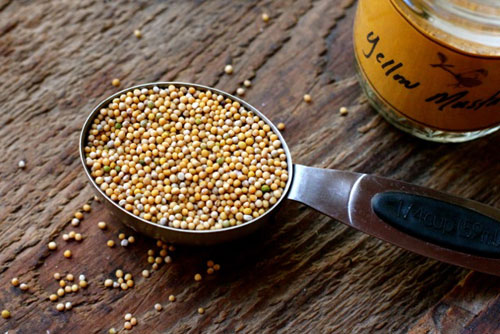