Since 1945, fluoride has been added to tap water, supposedly to prevent dental cavities and promote strong, healthy teeth - Currently ~ 70% of U.S. water supplies contain fluoride for >170 million Americans to drink.

A late 2010 study has found that the protective shield formed on teeth by this renowned cavity-fighter is up to 100 times thinner than previously believed – it has been long-touted that fluoride changes hydroxyapatite (the main mineral in tooth enamel) into a more-decay resistant material called fluorapatite. But new research found that the fluorapatite layer formed in this way is only 6 nm thick (1/10,000 th the width of a human hair).

"Such a thin layer is quickly worn away by ordinary chewing, so how can it protect teeth from decay?"

Fluoride is a known Toxin

Fluoride poisoning can lead to internal bleeding, long-term bone damage and tooth loss -before 1945 when communal water fluoridation took effect, fluoride was a known toxin.  E.g., a 1936 issue of the Journal of the American Dental Association stated that fluoride at the 1 ppm (part per million) concentration is as toxic as arsenic and lead.

The Journal of the American Medical Association stated in their September 18, 1943 issue, stated that “fluorides are general protoplasmic poisons that change the permeability of the cell membrane by certain enzymes.” And, an editorial published in the Journal of the American Dental Association, October 1, 1944, stated:   "Drinking water containing as little as 1.2 ppm fluoride will cause developmental disturbances. We cannot run the risk of producing such serious systemic disturbances. The potentialities for harm outweigh those for good."

Animals in southern Iceland are at risk of fluoride poisoning if they inhale or ingest the ash from the recent volcanic eruption - according to BBC News April 19, 2010:

“The fluoride in the ash creates acid in the animals' stomachs, corroding the intestines and causing haemorrhages. It also binds with calcium in the bloodstream and after heavy exposure over a period of days makes bones frail, even causing teeth to crumble.”

Studies show that consuming too much fluoride might actually CAUSE tooth decay:  Children who drank water containing high levels of natural fluoride (3 ppm), had MORE tooth decay -than children in other parts of South Africa who drank much lower concentrations (between 0.19 to 0.48 ppm), according to a study published in the September 2001 issue of International Journal of Pediatric Dentistry,  and fluoride-saturated American teenagers had twice the rate of cavities as the South African children drinking low levels of natural fluoride!

Pharmaceutical grade sodium fluoride is a dangerous toxin that can cause serious physical harm.  According to information from the National Institute of Occupational Safety and Health (NIOSH)and its Material Safety Data Sheet (MSDS) - sodium fluoride targets your:

The MSDS for sodium fluoride also states that fluoride compounds can induce:

Fluoride is a cumulative poison – the MSDS points out that the toxic effect of fluoride might be delayed, and that laboratory experiments have resulted in the development of tumours. Primarily absorbed through the GI tract into the blood, it then enters the cellular tissues. An average 50% of ingested fluoride is excreted through your kidneys. The remainder accumulates in your teeth and bones, pineal gland, and other tissues, such as the aorta. In children, >50% of an ingested dose of fluoride is deposited in bone, compared to only about 10% in adults, but storage is cumulative.

Studies have shown that fluoride toxicity can lead to countless number of illnesses - see chart: More on Fluoride Dangers.

The contents of a family size tube of fluoridated toothpaste is enough to kill a 25-pound child - In 1991, the Akron (Ohio) Regional Poison Centre reported that "death has been reported following ingestion of 16mg/kg of fluoride. Only 1/10 of an ounce of fluoride could kill a 100-pound adult. According to the Centre, "fluoride toothpaste contains up to 1mg/gram of fluoride."  Even Proctor and Gamble, the makers of Crest, acknowledge that a family-sized tube "theoretically contains enough fluoride to kill a small child."

Fluorides have been used to modify behaviour and mood of human beings - It is a little known fact that fluoride compounds were added to the drinking water of prisoners to keep them docile and inhibit questioning of authority, both in Nazi prison camps in World War II and in the Soviet gulags in Siberia.

Fluoride consumption by human beings increases the general cancer death rate - In 1975 Dr. John Yiamouyiannis published a preliminary survey which showed that people in fluoridated areas have a higher cancer death rate than those in non-fluoridated areas. The National Cancer Institute attempted to refute the studies. Later in 1975 Yiamouyiannis joined with Dr. Dean Burk, chief chemist of the National Cancer Institute (1939-1974) in performing other studies which were then included in the Congressional Record by Congressman Delaney, who was the original author of the Delaney Amendment, which prohibited the addition of cancer-causing substances to food used for human consumption. Both reports confirmed the existence of a link between fluoridation and cancer. (Note: Obviously Dr. Burk felt free to agree with scientific truth only after his tenure at National Cancer Institute ended, since his job depended on towing the party line).

Fluorides have little or no effect on decay prevention in humans! - In 1990 Dr. John Colquhoun was forced into early retirement in New Zealand after he conducted a study on 60,000 school children and found no difference in tooth decay between fluoridated and unfluoridated areas. He additionally found that a substantial number of children in fluoridated areas suffered from dental fluorosis. He made the study public.

There is no scientific data that shows that fluoride mouth rinses and tablets are safe for human use - In 1989 a study by Hildebolt, et al. on 6,000 school children contradicted any alleged benefit from the use of sodium fluorides. A 1990 study by Dr. John Yiamouyiannis on 39,000 school children contradicted any alleged benefits from the use of sodium fluorides. In 1992 Michael Perrone, a legislative assistant in New Jersey, contacted the FDA requesting all information regarding the safety and effectiveness of fluoride tablets and drops. After 6 months of stalling, the FDA admitted they had no data to show that fluoride tablets or drops were either safe or effective. They informed Perrone that they will "probably have to pull the tablets and drops off the market."

The fact that fluoride toothpastes and school based mouth rinses are packaged in aluminium, accentuates the effect on the body - In 1976, Dr. D. Allman and co-workers from Indiana University School of Medicine fed animals 1 part-per-million (ppm) fluoride and found that in the presence of aluminium, in a concentration as small as 20 parts per billion, fluoride is able to cause an even larger increase in cyclic AMP levels. Cyclic AMP inhibits the migration rate of white blood cells, as well as the ability of the white blood cell to destroy pathogenic (disease-causing) organisms.

Journal of Dental Research, Vol. 55, Sup B, p. 523, 1976, " Effect of Inorganic Fluoride Salts on Urine and Tissue Cyclic AMP Concentration in Vivo".  (Note: It is no small accident that toothpaste tubes containing fluoride are often made of aluminium)

"Regarding fluoridation, the EPA should act immediately to protect the public, not just on the cancer data, but on the evidence of bone fractures, arthritis, mutagenicity and other effects"  - William Marcus, Ph. D., senior EPA toxicologist, Covert Action, Fall 1992, p. 66

Dentists, public health officials and the public have been purposefully deceived

“Oh, What a Tangled web …” - In his book The Fluoride Deception, award winning journalist and former producer at the BBC, Christopher Bryson exposes the intertwined interests that existed in the 1940’s and 50’s between the aluminium industry, the U.S. nuclear weapons program, and the dental industry, which resulted in fluoride being declared not only safe, but “beneficial to human health.”

Your teeth and bones contain a natural form of mineral fluoride - Apatite (calcium fluoro-chloro-hydroxyl phosphate). The substances in your diet and saliva maintain an equilibrium between hydroxyl-apatite (calcium phosphate) dissolving and forming in your tooth enamel.

Caries and cavities occur in your teeth when you have more calcium phosphate dissolving than being adhered.  However, it is NOT the natural “Fluoride” mineral that is added to your drinking water -  it is another chemical fluoride compound – the toxic waste product from phosphate fertilizer plants.

There are three compounds that can be used for fluoridating water supplies:

The last two are the forms that are actually used to fluoridate water, and they are chemical by-products of aluminium, steel, cement, phosphate, and nuclear weapons manufacturing.  Such manmade fluoride has no nutrient value and no health benefits whatsoever.

These hazardous industrial wastes have NEVER been fully tested to determine their full potential health hazard -  instead, it is the pharmaceutical grade “sodium fluoride” (the first one on the list) that is used in most studies evaluating the risk to human health.

How much fluoride are you getting? - it’s easy to overdose!

When fluoridation began, the “optimal” level of fluoride for dental benefit was determined to be 1 mg/day for an adult male – based on an average water intake of 1 litre/day. At that level, 10% of the population (those in the high-risk group) were expected to experience fluorosis.

In addition to toothpaste and mouth wash, there are numerous other sources of fluoride:

Fluoride exposure levels for a 110-pound adult from food, beverages, toothpaste, and mouthwash - a 1991 review by the U.S. Department of Health and Human Services shows how drastic your overexposure might be when taking multiple sources into account.

How to build healthy teeth

The Fluoride Action Network have issued a Statement asking Congress to end water fluoridation in the United States that has now been signed by over 4,000 medical, dental, scientific, and environmental professionals (as of 2012)

This information is posted at the Leading Edge Research Group Internet Website – the references can be found in the reference section of this manual: 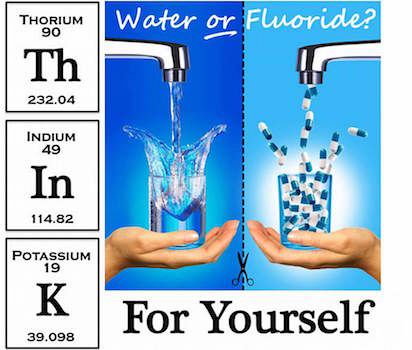 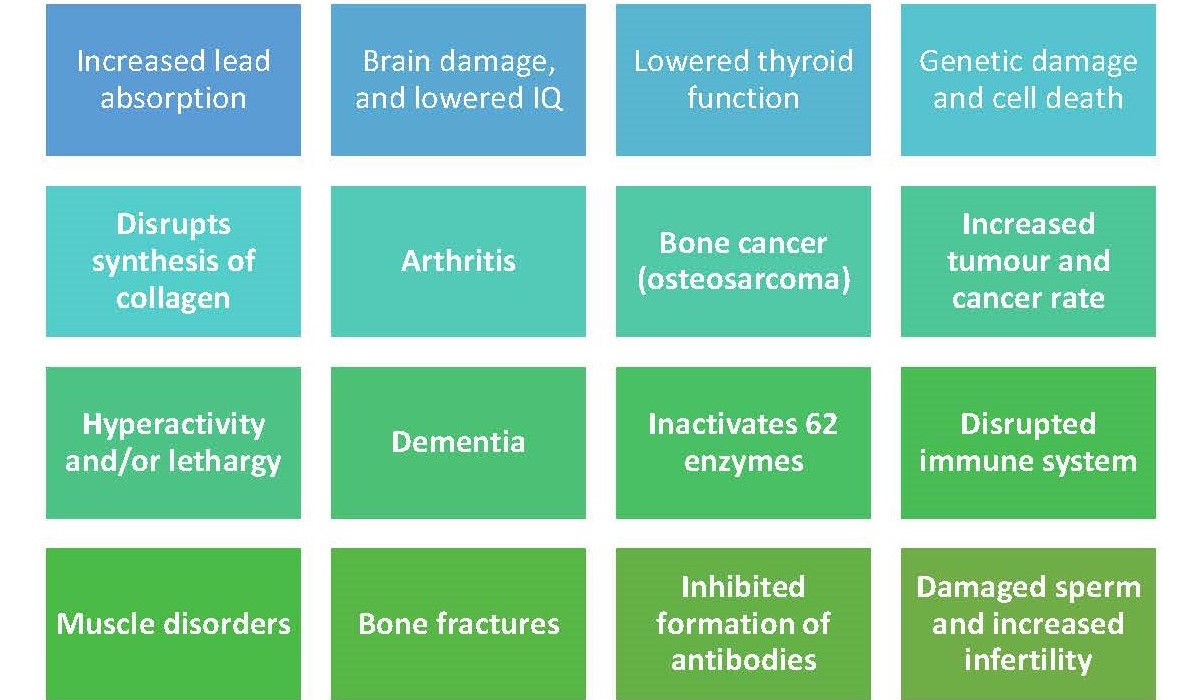 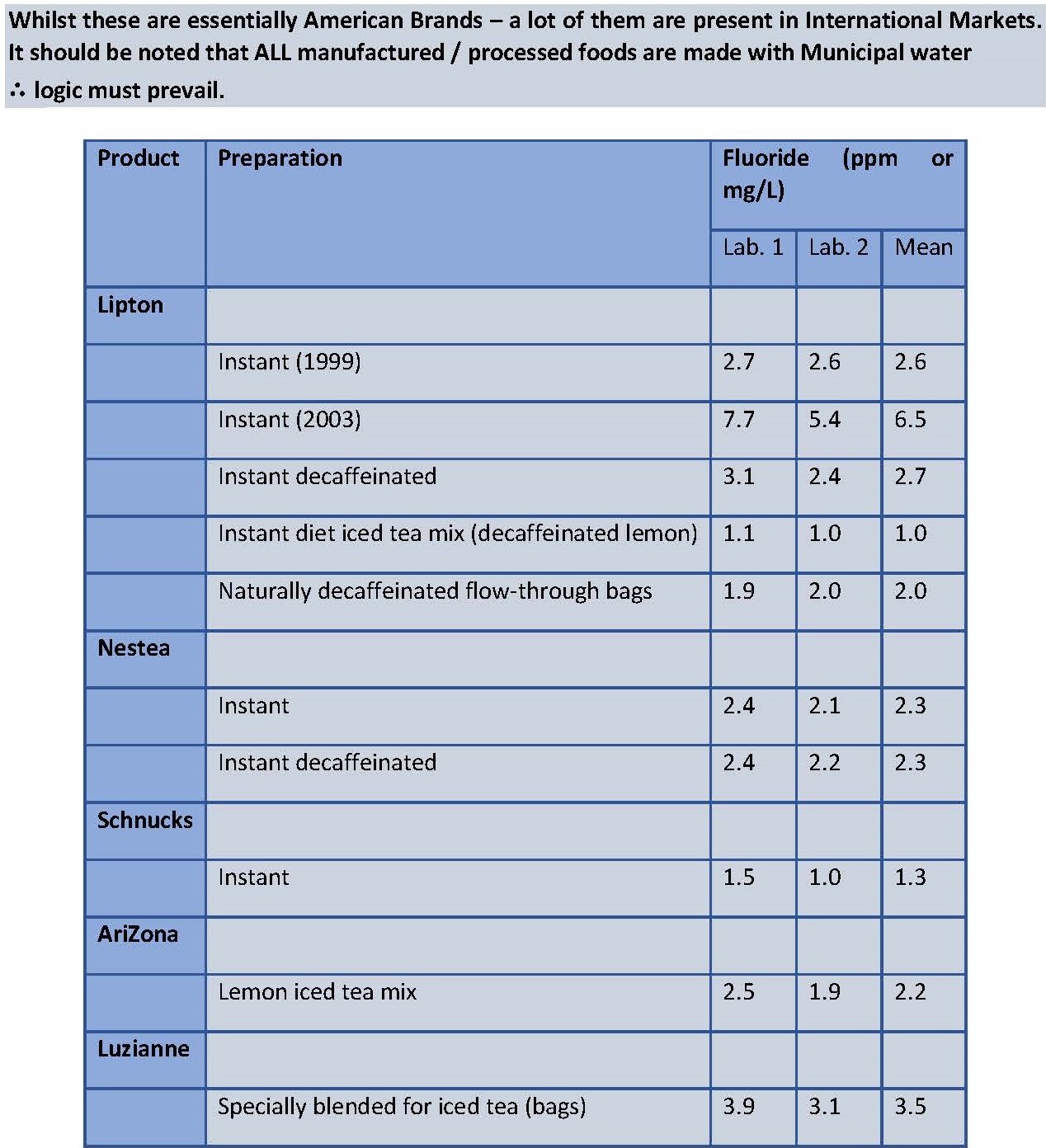 Processed Drinks made with Municipal Water