Milk is a staple of many people's diet, for the most part. It is even called the "perfect food" and it is-for a calf. So what does it have that we need? The first thing most people will say is calcium, but did you know that you can only use about eleven percent of the calcium in cow's milk because it lacks the needed amount of magnesium to process it? Also, the protein level in milk is so high that it can actually leach calcium out of the body. Did you know that the countries that consume high protein diets have the highest occurrence of osteoporosis?

Should we also mention that eighty percent of the protein in milk is casein? Casein is a powerful binder used to make polymer for plastics and glues. Just think how much more plastic and glue we could have if people didn't drink so much milk. Maybe we shouldn't think about that.

While we are on the subject, let's consider some other bad things in milk. Did I tell you that casein is a powerful allergen? It is a histamine that creates copious amounts of mucus in the mucus membranes. I remember being in a high school choir and the director not allowing us to drink milk before a performance because it would clog us up.

Remember the pus and squiggly bugs I mentioned? Well, pus is pus, but let us consider the squiggly bugs to be bacteria. Cow's milk is allowed to have feces in it. That's bacteria. Typical pasteurization for milk is 162 degrees for fifteen seconds. Have you ever sanitized water? How does 212 degrees for several minutes sound? Also, the bacterium in milk doubles at room temperature every twenty minutes. Not fazed? Read on. One cubic centimeter (that is about fifteen drops) of milk is allowed to have up to 750,000 somatic (or pus) cells and 20,000 live bacteria before it is unmarketable. That would be 20,000,000 bacteria and 750,000,000 pus cells in just over one quart of milk. For the sake of simplicity, that eight ounce glass of milk somebody just drank could have 177,441,150 pus cells and 4,731,600 bacteria. Is it any wonder that some people are lactose intolerant?

If you are cholesterol conscious, avoid milk. Three glasses of milk contain the same amount of cholesterol as fifty-three slices of bacon. (That's a good one for a vegetarian.)

God has never asked us to give up anything that He was not ready to replace with something far better.

And then there is the "clean and unclean" crowd. We know how important vitamin D is but have you heard of milk fortified with vitamin D-3?  D-3 is always derived from an animal. The photosynthesis of skin cells turns 7-dehydrocholesterol into vitamin D-3 by a pure chemical reaction. Vitamin D-3 can come from any of the four sources: pig skin, sheep skin, raw fish liver or pig brains. The majority of the time it is extracted from pig skin. So is milk clean? You decide.

Disease Cause or Transmission

Some estimates have placed the presence of leukemia virus in America's dairy herds at eighty-nine percent nationwide. Is there any question why leukemia is so prevalent in children today? Another disease on the increase in America is diabetes; no wonder, when the protein lactalbumin (also prevalent in milk) has been shown to be a key factor in diabetes. Then, of course, everyone has heard of mad cow disease, also known as scrapies in sheep and wasting disease in deer and elk. After twenty years of cattlemen and ranchers being aware of it, the U.S. government has finally documented it in various local herds nationwide.

What about the cheese and ice cream I love so much? What if I only eat a little, in moderation? Well, consider this: it takes ten pounds of milk to make one pound of hard cheese (cheddar, provolone, etc.). That's a tenfold concentration of what we have already been discussing. It takes twelve pounds of milk to make one pound of that wonderful, delicious and possibly deadly ice cream. And all this we have discussed without even mentioning the fifty-nine active hormones and up to fifty-two powerful antibiotics plus herbicides, pesticides and dioxins it may contain.

For the sake of brevity, may I share one more tidbit of information? You may have noticed the rise of a disease called Crohn's. Mycobacterium paratuberculosis causes a disease in cows known as "Johne's.â‚¬ Johne's disease causes diarrhea and heavy fecal shedding of bacteria. This bacteria, when cultured in milk, is not destroyed by pasteurization. Occasionally, this milk-borne bacteria will grow in a human host, resulting in irritable bowel syndrome and/or Crohn's Disease. 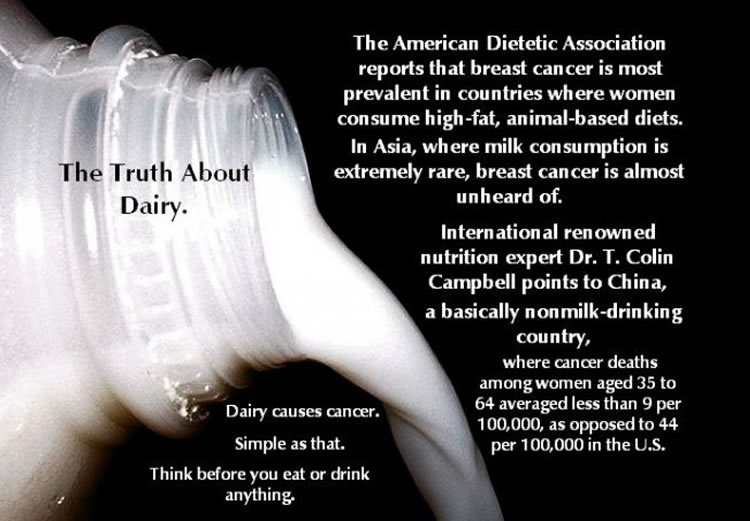