The health benefits of laughter include the reduction of stress hormones and blood pressure, as well as increased blood flow and oxygenation to the cells and organs. Laughing provides a natural workout for a number of muscle groups, can defend against illness, and even increase the response of beneficial tumor and disease-killing cells throughout the body. Laughter has also been shown to increase memory, intelligence, and creativity.

Laughter is a natural response to stimuli that our individual personalities find funny, whether in the form of images, sounds, physical sensations, or memories.

The physical response of laughter is very fast. After our senses are exposed to something “funny”, an electric current runs through our nervous system to our cerebral cortex. The higher brain functions in the left hemisphere decode the words and the syntactical structure in a very analytic approach to the information, while the more creative right hemisphere understands the humor, or “gets it”. The visual center of our brain then forms an image of the humorous idea, while our emotional (limbic) system releases chemicals that improve mood or promote happiness. Finally, our motor functioning makes us laugh, smile, or double over for a real knee-slapper.

By seeking out humorous situations or participating in activities that will stimulate laughter, you are giving your body a chance to exercise the diaphragm, as well as facial, leg, back, and abdominal muscles. Cortisol and adrenaline levels in the body, which are considered stress hormones, can be reduced through laughter, thereby adding to overall health. Also, the increase in respiration aids in the oxygenation of blood flowing to the brain and the rest of the body.

Humor is also a way to increase retention of information in academic or professional settings because of the higher number of mental connections between the information and emotional responses (laughter). The number of Gamma-interferon and T-cells, which are the disease and tumor hunters of the body, are increased through regular amounts of laughter, and other sicknesses like respiratory infections and the common cold can be inhibited and decreased if laughter is a regular part of a person’s life.

In a very general sense, laughter is a painkiller, and reduces the stress and anxiety of physical ailments through the same biological process that is outlined above.

Laughter is also a social mechanism, by which we make friends and connect with others. We often laugh at other people laughing, or at banal statements that are decidedly un-joke-like. The social phenomena of laughter is an important aspect of humor, but its’ connection to health is not widely studied, and would be better suited to anthropology than health and nutrition.

Laughter indeed is a medicine for all. Its health benefits include reducing the release of stress hormones, improving the mood, enhancing creativity and many more.

Laughter has been shown to reduce the levels of certain stress hormones in the body. Although some of these chemicals are necessary for the body in certain situations, high levels without useful application can cause an imbalance in homeostasis and can have a behavioral impact. These are called immunosuppressant hormones and can have a harmful effect on the immune system. By lessening the presence and production of these stress hormones through “mirthful activity” (like laughing), the overall health and well being of a person can be improved.

On the positive side of hormonal impact, laughter can also increase the number of beneficial hormones like endorphins and neurotransmitters in the body. By increasing the level of endorphins in the body, studies have shown that a subject’s threshold for pain is increased, making laughter, in a sense, a painkiller or a pain dampener. Endorphins attach to the same receptors in our brain as opiates, making the release of endorphins like a drug experience without the negative side effects, along with easing mood, tension, anger, and pain. An increase in neurotransmitters means that your brain is able to function faster, make connections more rapidly, and comprehend situations and problems at a higher rate.

Laughter can even go so far as to help you stay healthy. It has been widely studied that laughter can stimulate antibody cells to develop at faster rates by changing the body’s chemistry through hormonal shifts. This increase in antibodies means that the body is able to fight off illness and infection easier. T-Cells are a type of white blood cells known as lymphocytes. Studies have shown that the efficiency of T-cells is actually increased in a subject who regularly laughs and adds those hormonal advantages to their overall system.

Aside from the internal benefits of laughter, it can also be a natural way to exercise various muscle groups in your body. When you engage in laughter, whether it is a giggle or a guffaw, muscles are used to create that movement. The old adage that it “takes more muscles to frown than to smile” is somewhat true, unless you are laughing while smiling. Laughter engages the body’s diaphragm and abdominal muscle systems during that repetitive expanding and contracting that often happens when laughing for an extended period of time. This is why our sides or stomach hurt slightly after long bouts of laughter.

The facial muscles are also exercised, the same as they would be when singing or enunciating strongly. Depending on your laughing style, and how physically engaged you become, you can work out your legs, back, shoulders, and arm muscles as well.

Laughter has also been shown to fight against cancer by increasing the levels of IFN (Interferon-gamma) in the body. IFN stimulates the B-cells, T-cells, NK cells, and immunoglobulin, and it also works to regulate cell growth. These compounds are integral to a healthy immune system, but they are also the lines of defense against cancer and the abnormal growth of dangerous tumors in the body. Laughing every day can keep all sorts of doctors away!

For anyone with high blood pressure, try to laugh more and watch your blood pressure decrease. Studies have shown that “mirthful laughter” causes an initial increase in arterial blood pressure due to the physical act of laughing, but that rise is followed by a decrease to below the normal resting blood pressure. This is further proof that laughter does indeed improve circulation and can reduce blood pressure, which is one of the major causes of heart disease and cardiac issues for many people.

The process of laughter causes us to use our respiratory system very quickly and strenuously for a short amount of time. This intense activity stimulates an increase in the blood flow as the heart rate increases temporarily, thus increasing the amount of oxygen flowing to the brain. Increased oxygen levels in the brain promote healthier brain function, as oxygen is integral to brain health. Additionally, pulmonary activity gets a boost from laughter as well, because there is a higher level of ventilation of the lungs during robust episodes of “mirthful laughter”

Along with the improved brain function that laughter can provide, it can also work to improve memory in a different way. The connections and associations that the brain forms while “learning” can be widened and made more complex by combining basic learning with an emotional response like laughter or humor. By varying the levels of association with different parts of our brain (pleasure, amusement, logic, reason, etc.) remembering facts and recalling details is easier because there are more linkages present in our memory.

Studies have shown that the simple act of laughing or smiling can improve the mood and happiness levels in subjects versus other activities. Laughter has been found to have an analgesic quality that reduces even unconscious pain, causing an improvement in mood. Even forced laughter, without a normally humorous stimulus, works to improve mood. Therefore, even if you don’t have anything funny to laugh about, it will probably put you in a better mood just to participate in the physical act of laughter. Your brain does not actually register whether the stimulus is genuine or not, since people often find unusual things funny, or laughing at inappropriate times. Research suggests that good mood may lead to a greater preference for healthy foods over indulgent foods.

Laughter has a large number of effects on the chemical processes in the body, and the combination of reduced stress hormones, increased endorphins, and increased oxygenation to the blood and brain caused an increase in creativity in test subjects who laugh often. By improving overall brain health and bolstering its natural support system, both hemispheres can work together more efficiently so creativity has a place to foster and grow.

Side Effects of Laughter

When you laugh particularly hard for long periods of time, your abdominal muscles can become sore and might ache for a short time after laughing. This effect is not permanent, and is actually a form of beneficial exercise.

There is no scientific data that shows laughter itself to have any negative effects unless combined with other serious health issues like severe cardiac disease, in which the stimulus of laughter and the temporary increase in blood pressure can be dangerous.  Also, laughter should be avoided during recovery from abdominal surgery or some other area of the body that is physically impacted by the act of laughing.

Besides those few cautionary situations, the results are clear.

Have you ever asked yourself, “self, when did I lose the ability to unselfconsciously roar with laughter?” To be able to express pure joy without any inhibitions is not only our birth right; it's also really good for us.

Here are a few reasons why:

Be aware of the philosophy of laughter yoga. Laughter yoga was created by Dr. Madan Kataria, “The Laughter Guru”, who believes in the power of laughter and its ability to provide physical and holistic benefits. To reap the scientifically proven benefits of laughter, you will laugh continuously for at least 10 to 15 minutes in a laughter yoga class. The laughter must also be loud and deep, like a belly laugh coming straight from your diaphragm. Laughter yoga classes create a safe, open space where you can laugh loudly and fully for prolonged periods of time.

According to the philosophy of laughter yoga, it is important to maintain a sense of childlike playfulness and openness when practicing this form of yoga. Rather than rely on your sense of humor or laughing at something you find funny, you will commit to laughing on a daily basis and teach your body and mind to laugh on command.
Through a combination of deep breathing, physical movements, and deep laughing, laughter yoga ties the mind and body together, creating harmony between them. Though you may not feel happy or motivated to laugh, laughter yoga can help you learn to laugh as a form of exercise.

The following steps will explain the Laughter exercises that make up each class or session. Your teacher or group may develop their own variants, but these basics are standard and knowing them will help you to practice at home as well as within the group.

1. Clap Your Hands in Front of the Heart

2. Lay Your Hands on Your Head

3. Do the Laughing Wave

Bow your upper body to the earth. Have your hands facing down. Focus on the ground. Send your hands upward to heaven. Wail like a siren: "Ha ha ha ha." Perform the laughing wave several times. Through your laughter, connect heaven and earth.

4. Do the Welcome Laughter

Within a group, keep eye contact and laugh, until all people in the group are happy. At home, look in the mirror and welcome yourself. When you look into the mirror there is always something to laugh about.

5. Extend Your Hands to Heaven

Concentrate on your chest and laugh "Ha ha ha" for a minute. 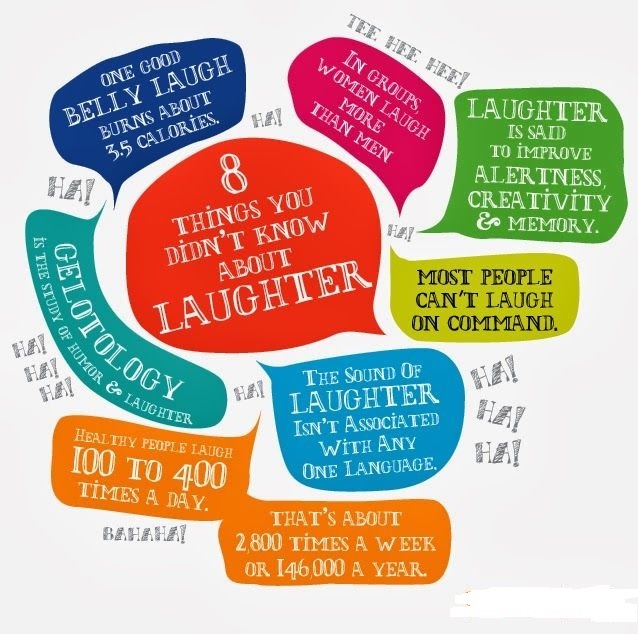