Kombucha is a living health drink made by fermenting tea and sugar with the Kombucha culture. The result can taste like something between sparkling apple cider and champagne, depending on what kind of tea you use. It's not what you'd imagine fermented tea to taste like.

The origins of Kombucha have become lost in the mists of time. It is thought to have originated in the Far East, probably China, and has been consumed there for at least two thousand years. The first recorded use of kombucha comes from China in 221 BC during the Tsin Dynasty. It was known as "The Tea of Immortality".

It has been used in Eastern Europe, Russia and Japan for several centuries. It's from Japan in 415 AD that the name kombucha is said to have come. A Korean physician called Kombu or Kambu treated the Emperor Inyko with the tea and it took his name, "Kombu" and "cha" meaning tea. Russia has a long tradition of using a healing drink called "Tea Kvass" made from a "Japanese Mushroom".

From Russia it spread to Prussia, Poland, Germany and Denmark but it seems to have died out during World War Two. After the war Dr Rudolph Skelnar created renewed interest in kombucha in Germany when he used it in his practice to treat cancer patients, metabolic disorders, high blood pressure and diabetes.

The Kombucha culture looks like a beige or white rubbery pancake. It's often called a 'scoby' which stands for ' symbiotic culture of bacteria and yeasts.The culture is placed in sweetened black or green tea and turns a bowl full of sweet tea into a bowl full of vitamins, minerals, enzymes and health-giving organic acids.

Kombucha culture digests the sugar it produces a range of organic acids like glucuronic acid,gluconic acid, lactic acid, acetic acid, butyric acid, malic acid and usnic acid; vitamins, particularly B vitamins and vitamin C; as well as amino acids, enzymes. And of course there are all the benefits of the probiotic microorganisms themselves. The Kombucha culture is a biochemical powerhouse in your kitchen.

You might wonder if fermenting tea with yeasts would produce an alcoholic beverage. It's a good question. The yeasts do produce alcohol but the bacteria in the culture turn the alcohol to organic acids. Only minute quantities of alcohol, typically 1% by volume remains in the kombucha brew.

With every brew you make the kombucha forms a new layer or scoby on the surface of the liquid. These can be left to thicken the scoby or can be divided, giving you spare cultures that you can store in some sweet tea in the fridge in case something should happen to your active culture. Or you might want to pass on spare Kombucha cultures to friends or use a new scoby to start another batch of kombucha.

Many health claims are made for kombucha but there is less research on the benefits of kombucha than there is on fermented milk products. It has certainly been shown to have similar antibiotic, antiviral and anti fungal properties in lab tests. In rats been shown to protect against stress and improve liver function. There is a lot of experiential evidence from people who have been using kombucha over many years. Many of the benefits reported include improvements in energy levels, metabolic disorders, allergies, cancer, digestive problems, candidiasis, hypertension, HIV, chronic fatigue and arthritis. It is also used externally for skin problems and as a hair wash among other things.

Glucuronic Acid
The body's most important detoxifier. When toxins enter the liver this acid binds them to it and flushes them out through the kidneys. Once bound by glucuronic acid toxins cannot escape. A product of the oxidation process of glucose, glucuronic acid is one of the more significant constituents of Kombucha. As a detoxifying agent it's one of the few agents that can cope with pollution from the products of the petroleum industry, including all the plastics, herbicides, pesticides and resins. It kidnaps the phenols in the liver, which are then eliminated easily by the kidneys. Kombucha can be very helpful for allergy sufferers. Another by-product of glucuronic acid are the glucosamines, the structures associated with cartilage, collagen and the fluids which lubricate the joints. It is this function that makes Kombucha so effective against arthritis.

Lactic Acid
Essential for the digestive system. Assist blood circulation, helps prevent bowel decay and constipation. Aids in balancing acids and alkaline in the body and believed to help in the prevention of cancer by helping to regulate blood pH levels.

Acetic Acid
A powerful preservative and it inhibits harmful bacteria.

Usnic Acid
A natural antibiotic that can be effective against many viruses.

Oxalic Acid
An effective preservative and encourages the intercellular production of energy.

Gluconic Acid
Produced by the bacteria, it can break down to caprylic acid is of great benefit to sufferers of candidiasis and other yeast infections such as thrush.

Butyric Acid
Produced by the yeast, protects human cellular membranes and combined with Gluconic acid strengthens the walls of the gut to combat yeast infections like candida.

Types of Tea for Kombucha

Kombucha requires tea for its fermentation (Camellia Sinensis). That's real tea not herbal tea. It can be also be sensitive to strong aromatic oils. A tea like Earl Grey that contains Bergamot oil, can sometimes kill or badly affect the culture. There are several different kinds of tea that give different results from lighter tastes to stronger more cider like tastes.

Black Tea
Black tea is made from leaves that have been fully fermented. The leaf is spread out and left to wilt naturally, before being fired, producing a deep, rich flavour and an amber brew.

Oolong Tea
Oolong tea is half way between green tea and black tea. It's gently rolled after picking and allowed to partially ferment until the edges of the leaves start to turn brown. Oolong combines the taste and colour of black and green tea.

Green Tea
Green tea is withered then steamed or heated to prevent oxidation and then rolled and dried. It is characterised by a delicate taste, light green colour. The Japanese tea Sencha makes an especially fine kombucha.

White Tea
White Tea is the rarest and most delicate of tea. Plucked forty-eight hours or less between the time the first buds become fully mature and the time they open. Unlike black and green teas, white tea isn't rolled or steamed, but simply aired dried in the sun, this preserves more of its antioxidant properties. White tea has about three times as many antioxidant polyphenols as green. White tea represents the least processed form of tea.

Despite kombucha's many benefits, it is VITALLY important that you enquire from your supplier (if purchasing commercially) as to the length of their fermentation period.  For those with cancer, kombucha that has been fermented for AT LEAST ten days is necessary.  If the ferment is only 4 days, far too much sugar remains in the tea!!!!

The Ubiquitous Co-Enzyme UDPGlucuronic Acid Detoxifying Agent in Kombucha Tea? By Norbert Hoffmann.
The History and Spread of Kombucha By James Roche.
Kombucha Tea for Your Health and Healing.
The Fascination of Kombucha by Ganther W. Frank 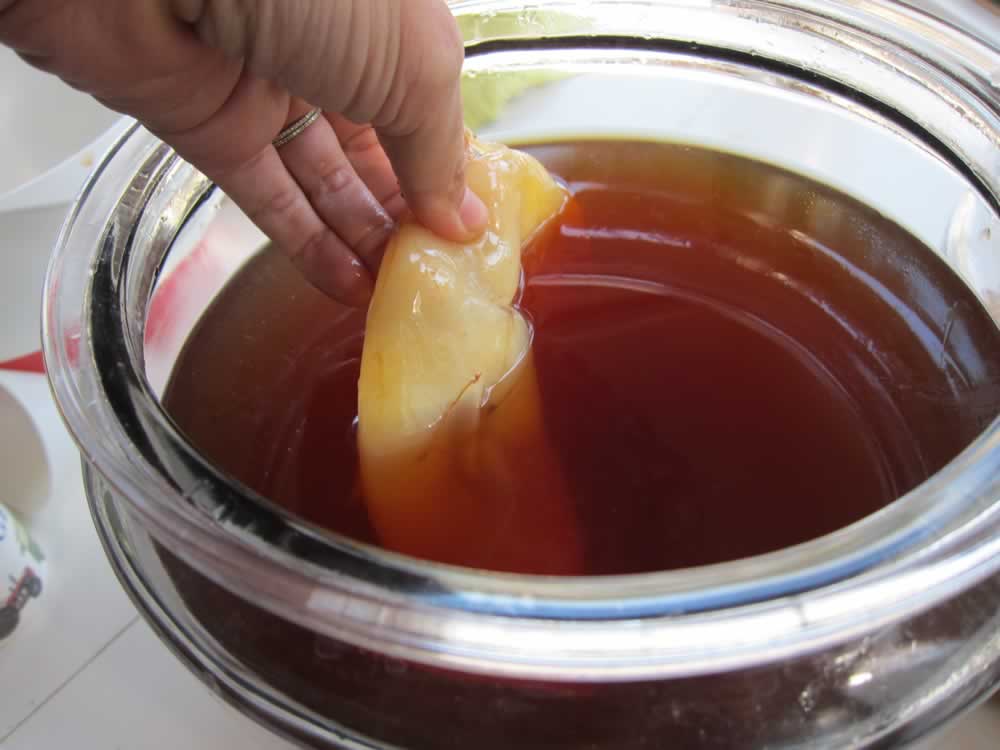