Are We Too Clean?

We have come a long way in our battle against bacteria, viruses, and parasites etc.   We don't die of infections nearly as frequently anymore due to the effectiveness of antibiotics and other drugs, as well as better cleanliness in all aspects of our life. We know that germs can cause sickness, and so we do what we can to avoid and kill them.  But are we killing too many of them?  Are we using antibiotics too frequently?   Is it possible to be too clean?   The Hygiene Hypothesis suggests that we are sanitizing our living and working environments to the point where we are increasing the incidence of allergy, asthma, and autoimmune disease.

We have two branches to our immune system that operate differently, and that need to balance each other for optimal health.   The Th1 system of specialized white blood cells attack infected cells in the body thereby preventing an infection from spreading.  The Th2 system works by developing antibodies to microbes, thereby preventing the infection in the first place.   Infants tend to use almost exclusively the Th2 system to protect themselves, and the Hygiene Hypothesis suggests that infants and young children need exposure to harmless microbes in order to "exercise" the Th1 system and make it strong.   If that microbe exposure does not happen because the environment has been sanitized with antibacterial products, the Th1 system isn't developed and the balance between the two systems gets thrown off.   The Th2 system then becomes too powerful creating an overreaction or allergic reaction to harmless substances like pollen or animal dander, and the child is then more likely to develop allergies and/or asthma.

Much of the evidence for this is epidemiological.   Researchers found that children that were raised on farms had far less hay fever than children that lived in cities.   Young children that had many older siblings had less allergies than those that had few siblings suggesting that the germs that the older kids brought home were protective for the younger ones.   A study in the Lancet showed that kids from small families that went into daycare before age 1 were less likely to develop allergies than those who began daycare later.   Erika Von Mutuis studied rates of allergy and asthma in East and West Germany and found that the kids that lived in the less clean areas of East Germany had less problems with asthma and allergies than those in West Germany.   The East German kids were more likely to be around other children and animals when they were very young.

There is also evidence that using antibiotics before the age of 2 is linked to allergy and asthma, as antibiotics also kill the "good" bacteria in the gut which is necessary for building a good immune response. Researchers also found that kids that are not vaccinated and are not given antibiotics have fewer allergies than kids that are.

Another group of scientists believe that in the case of autoimmune disease, it is the Th1 response that is dominant, leaving the Th2 system weakened. Their research suggests that inflammatory bowel disease, where the intestinal tissue becomes inflamed due to inappropriate attacks by the Th1 system to partially digested food (food sensitivities), may be caused by the lack of a parasitic worm called helminths, which the researchers say should be a part of our intestinal culture and have almost disappeared due to our over-sanitized conditions.  In two different experiments, they treated not only mice, but also humans suffering from inflammatory bowel disease with harmless worms, and found that symptoms improved considerably.   The concept that too little exposure to infectious agents may contribute to autoimmune disease is very controversial, but there is some evidence supporting the notion.   In an Israeli study, rats in a sterile environment couldn't develop the immune cells necessary to suppress an autoimmune response.

So, what is the grand message in all of this?  We need to be clean, but not too clean.   Just like plants can't be healthy in sterilized dirt, we need some contact with the germs, microbes and bacteria that are a part of our environment, so use regular soaps rather than antibacterial soaps and cleaners.

Sometimes it is better to allow a mild illness to run its course rather than to treat it aggressively with drugs and possibly develop allergies later.   Playing in the dirt is good, and having a dog or cat in the house along with the baby and kids is also good.   Taking a probiotic to repopulate the intestinal flora is especially important after finishing a round of antibiotics and may also greatly help the immune system in general. 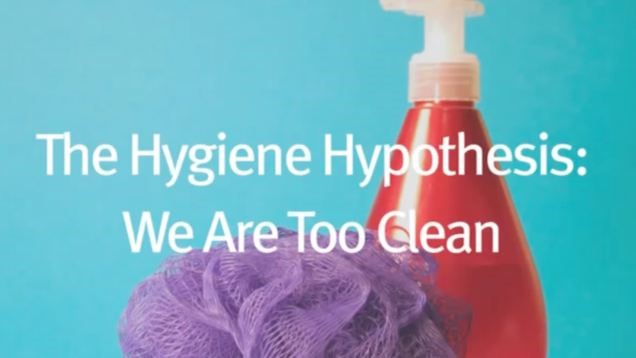