Your skin is our largest organ, acting as both a barrier and a waste removal system.  It's porous and permeable, which allows it to aid in our bodies’ elimination processes, but also allows absorption of much of what we put on it and in the same way it digests nicotine through a patch, it absorbs toxins into your bloodstream, where your circulation propels them into contact with every single cell.

By entering through the skin, these toxins also bypass the detoxifying bacteria, selective cellular barrier, and sensitive immune system in your gut, meaning they can be deposited and even stored throughout your tissues before your liver has a chance to metabolise and detoxify them.

According to nutritional pioneer Dr. Hazel Parcells, 65% of body cleansing is achieved via the skin!

Bathing is viewed more for relaxation than detoxification as a general rule. The focus on bathing enjoyment can be observed worldwide in the plethora of artificially scented, hormone disrupting bubble bath concoctions that are sold in stores, year around.

I would venture to suggest that health cannot easily be maintained over the long term without the regular incorporation of detox baths.  If traditional cultures valued therapeutic cleansing baths back when our world was pristine with clean water, air, and unprocessed, additive free food, one can only imagine how important a gentle and regular detoxification bathing protocol is today given our toxic soup world with chemicals and other biologically disrupting agents nearly everywhere!

If the body is clogged up with toxins from the physiological stress of modern living and the chemical assault from every direction, it cannot properly utilize the nutrient dense food that is consumed.

To maximize the effects of the hydrogen peroxide bath we recommend that you perform the “Dry Brushing” protocol prior to your Hydrogen Peroxide or Detox bath. As hydrogen peroxide bath, as well as all bath therapies, are more effective when you utilize dry skin brushing on the entire body. Dry skin brushing removes the layer of dead skin that can block the absorption of energy and nutrients from this bath and also stimulates the blood and lymph fluids to rise to the skin to accept the healing effects of the bath.

Hydrogen peroxide bath treatments are a form of oxidative or oxygen therapy. In oxygen therapy the goal is to increase serum oxygen levels. High oxygen levels are beneficial for oxidizing (breaking down) toxins. Oxygen hydrotherapy can help the natural processes of the body in numerous ways. Oxygen energizes our cells and can reverse degeneration, it stimulates the immune system and promotes healing. In cancer treatment the oxygen delivered to the cells by hydrogen peroxide baths are unwanted by cancer cells as cancer cells thrive in an anaerobic environment. Read about hydrogen peroxide baths in cancer treatment in our cancer program pages.

Hydrogen peroxide baths are indicated for detoxification, inflammatory, autoimmune and degenerative diseases and cancers. Small amounts of hydrogen peroxide can activate several genes that are responsible for clearing tissue debris and improves venous and lymphatic circulation.

To help keep the body oxygenated, we recommend a hydrogen peroxide bath.  Start slowly and build up.  Begin with a half cup then a day later a whole cup and work up slowly until you can manage NO MORE THAN a maximum of two cups. (More than one cup should not be used unless advised to do so by your practitioner).

Can I use 3% peroxide instead?

The peroxide available from the chemist is usually about 3% hydrogen peroxide.  In order to equal ½ to one cup of 35% hydrogen peroxide you will need at least 6 to 12 cups of 3%.  That will make it quite expensive. HOWEVER, it is not our recommendation that you use these peroxides.

Are there any side effects?

Taking a hydrogen peroxide bath is like giving yourself an oxygen supplement. Some people report problems such as headaches and loose stools after bathing with peroxide

These symptoms are seen as “detox reactions” – the body doing some housecleaning with the extra oxygen you’ve provided. That’s why we would not recommend using more than the recommended amount. At least not until you’re very comfortable with peroxide baths.

Because food grade peroxide doesn’t have the stabilizers that most other kinds of peroxide have. Food grade is "cleaner". You could use any kind of peroxide – various kinds have different stabilizers. (If using a different kind, be sure to check the percentage (concentration) so that you are using an equivalent amount.)

What else goes in the bath?

You can also use salt or essential oils, right along with the hydrogen peroxide. We often recommend the use of Epsom salts, essential oils, and herbal infusions for peroxide bath soaks.

Will the peroxide bleach your hair?

That depends on how much peroxide you use, and how long and how often you stay in the peroxide baths. But, yes, it could bleach your body hair as well as your head hair (if you put your hair in the water).

Peroxide will kill any anaerobic germs in the water and on your skin.  Use coconut oil on the skin after baths, if your skin feels a little dry.

It goes to the sewage treatment centre and kills a lot of anaerobic bacteria there, and, in the process, it will break down into water and oxygen.

If you happen to live in the country and your tub water goes out to the land or to a creek, depending on the concentration of peroxide in the water. It may be too strong to release directly into a stream, for example.  If your bath water is going to your own septic system, it is likely to be good for it.

Anything else to know?

Taking a hydrogen peroxide bath is mildly drying to the skin. Using some natural body lotion in the form of coconut oil or tissue oil after your bath is recommended.

The reason water as hot as can be tolerated is typically used is because this initially draws toxins to the surface of the skin, as described by Dr. Hazel Parcells in her book “The Pioneer Nutritionist ".  Then, as the water gradually cools down, the toxins are pulled into the water via the principle of osmosis – the weak energy from the cooling water draws from the strong energy from the body heated up initially by the very hot water. 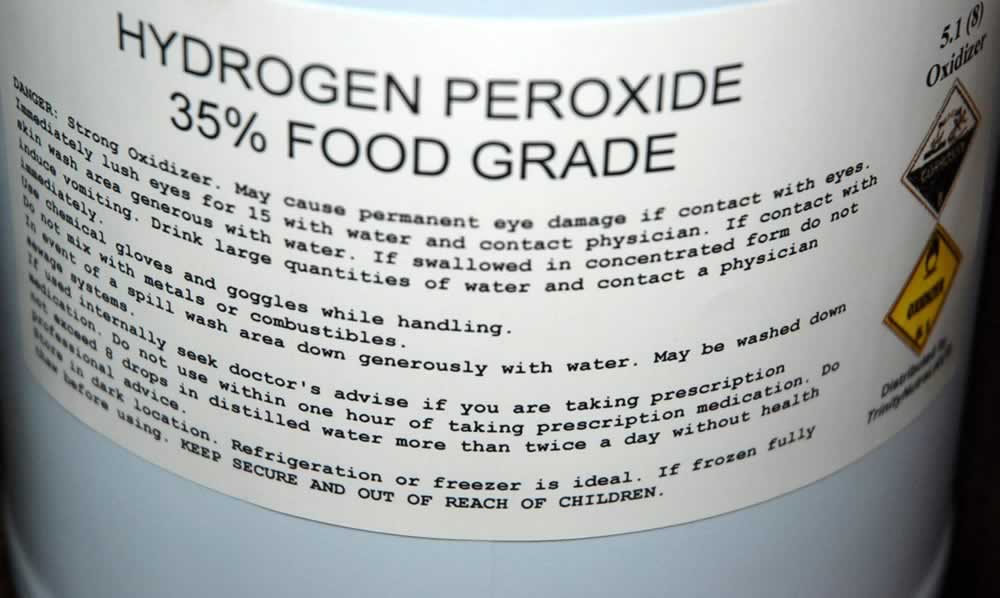