Every year, food manufacturers pour 15 million pounds (6.8 million kg) of artificial food dyes into foods - and that amount only factors in eight different varieties, according to the Centre for Science in the Public Interest (CSPI).

These dyes are so common in foods -- especially kids' foods -- that parents don't think twice about giving their children rainbow-coloured cereal or fluorescent blue "juice," and adults don't consider bright orange cheese puffs out of the ordinary, either.

But you might do a double take if these food packages contained warnings detailing what these artificial food colourings may really be doing to your health, and that of your children.  Well, in the European Union at least, they do. As of July 2010, most foods in the EU that contain artificial food dyes were labelled with warning labels1 stating the food "may have an adverse effect on activity and attention in children." The British government also asked that food manufacturers remove most artificial colours from foods back in 2009.

In the United States, however, consumers are still snatching up artificially coloured foods with fervour, as most are completely unaware of the risks involved … and let me just say, hyperactivity in children is only the tip of the iceberg.

Cancer and Other Serious Risks from Food Dyes Revealed

In CSPI's summary of studies on food dyes2, you can see that some of the most commonly used food dyes may be linked to numerous forms of cancer. CSPI reported3:

"The three most widely used dyes, Red 40, Yellow 5, and Yellow 6, are contaminated with known carcinogens … Another dye, Red 3, has been acknowledged for years by the Food and Drug Administration to be a carcinogen, yet is still in the food supply."

In their 58-page report, "Food Dyes: A Rainbow of Risks," CSPI revealed that nine of the food dyes currently approved for use in the United States are linked to health issues ranging from cancer and hyperactivity to allergy-like reactions -- and these results were from studies conducted by the chemical industry itself. (See Hand Outs)

For instance, Red # 40, which is the most widely used dye, may accelerate the appearance of immune system tumours in mice, while also triggering hyperactivity in children.

Blue # 2, used in candies, beverages, pet foods and more, was linked to brain tumours. And Yellow 5, used in baked goods, candies, cereal and more, may not only be contaminated with several cancer-causing chemicals, but it's also linked to hyperactivity, hypersensitivity and other behavioural effects in children.

"Almost all the toxicological studies on dyes were commissioned, conducted, and analysed by the chemical industry and academic consultants. Ideally, dyes (and other regulated chemicals) would be tested by independent researchers.

Furthermore, virtually all the studies tested individual dyes, whereas many foods and diets contain mixtures of dyes (and other ingredients) that might lead to additive or synergistic effects.

In addition to considerations of organ damage, cancer, birth defects, and allergic reactions, mixtures of dyes (and Yellow 5 tested alone) cause hyperactivity and other behavioural problems in some children.  … Because of those toxicological considerations, including carcinogenicity, hypersensitivity reactions, and behavioural effects, food dyes cannot be considered safe. The FDA should ban food dyes, which serve no purpose other than a cosmetic effect, though quirks in the law make it difficult to do so (the law should be amended to make it no more difficult to ban food colourings than other food additives).  In the meantime, companies voluntarily should replace dyes with safer, natural colourings."

If you need further incentive to remove artificially coloured foods from your diet, remember the reason they're added to processed foods in the first place: to make a food that would otherwise be an off-coloured mess look appealing.

When foods are processed not only are valuable nutrients lost and fibres removed, but the texture, natural variation and flavours are lost also. After processing, what's actually left behind is a bland, uninteresting "pseudo-food" that most people would find entirely unappetizing.

So at this point, food manufacturers must add back in the nutrients, flavour, colour and texture in order to make them desirable, and this is why they become loaded with food additives.

Most commonly, additives are included to:

In the case of kids' foods, bright colours are also added to attract kids' attention and make the foods appear "fun." But in most cases, if a food comes in an outrageous colour that is not found in nature, consuming it is not a good idea.

Take one carefully designed, randomized, double-blind, placebo-controlled study published in the journal The Lancet. It concluded that a variety of common food dyes, and the preservative sodium benzoate -- found in many soft drinks, fruit juices and salad dressings -- do in fact cause some children to become measurably more hyperactive and distractible.

The study also found that the E-numbered food dyes do as much damage to children's brains as lead in gasoline, resulting in a significant reduction in IQ.

The results of this study were what prompted the British Food Standards Agency (FSA) to issue an immediate advisory to parents, warning them to limit their children's intake of additives if they notice an effect on behaviour. As mentioned earlier, they also advised the food industry to voluntarily remove the six food dyes named in the study back in 2009, and replace them with natural alternatives if possible.

Stick to Naturally Coloured Foods for Your Health

Let me make it clear that your diet should include a range of vibrantly coloured foods … but these foods should be the ones that are naturally rich in colour. Red bell peppers, purple eggplant, green spinach, blueberries, and rainbow chard are all examples of healthy foods whose bright colours are signs of the important nutrients they contain.

These are the food colours you need in your diet … not the man-made varieties found in most processed foods. The good news is avoiding artificial food dyes is incredibly easy -- just stick to whole fresh foods and avoid the processed ones. If you need help breaking an addiction to processed foods, these seven steps will help you wean off of them in favour of healthier, unprocessed, natural alternatives.

The Dangerous Impact of Food Colouring

Americans are now eating 5 times more food dye than in 1955.

Many parents have observed their child’s behaviour improve drastically when taken off food dyes, especially Red #40. Because of this widespread anecdotal evidence, the editors at Special Education Degree decided to do an investigative report on the negative effects of food dye’s in human beings.

There are only seven certified colour additives currently used in food: 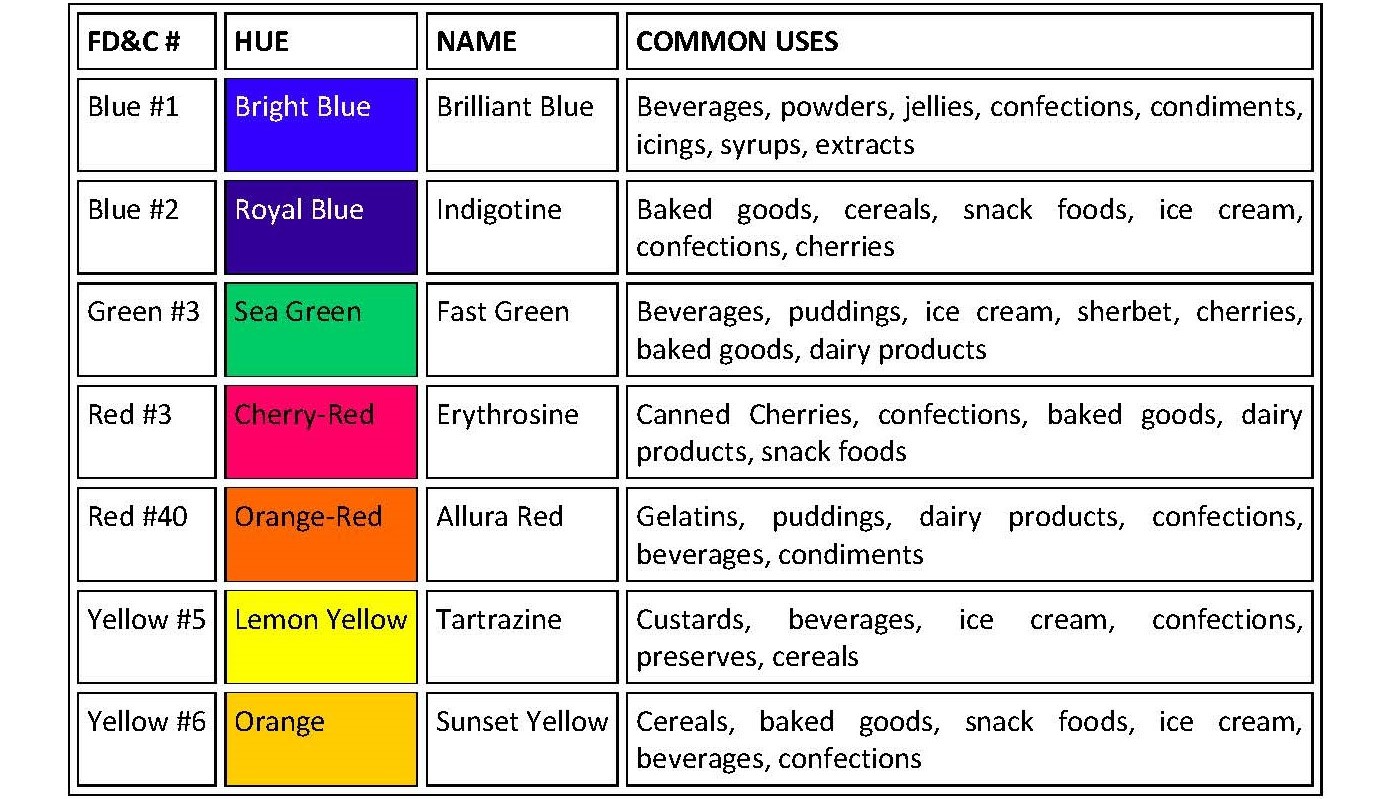 The hidden dangers of food colouring dyes can be clearly seen on the chart: Food Colourants - Dangers

Alternatives to Artificial Dyes Include:

Whilst these are LISTED as being derived from plant, animal or mineral sources which have been processed in some way. The layman might call these "natural" colours because of their origins, though it's likely they've come out of a factory or chemical plant just like certifiable colours.  Further, using a food dye made from beetles leaves us feeling a bit ill….

If a certified colours is used, it must be explicitly declared on the ingredient list, as "FD&C Red Dye #40" or "Red 40"   So if you are reading a products list of ingredients and all you see is the nonspecific "artificial colours" then you can be sure it's not a certified colours. It may be beet juice extract, it might be carmine or it could be caramel colours, but it's certain that it's not Red40. 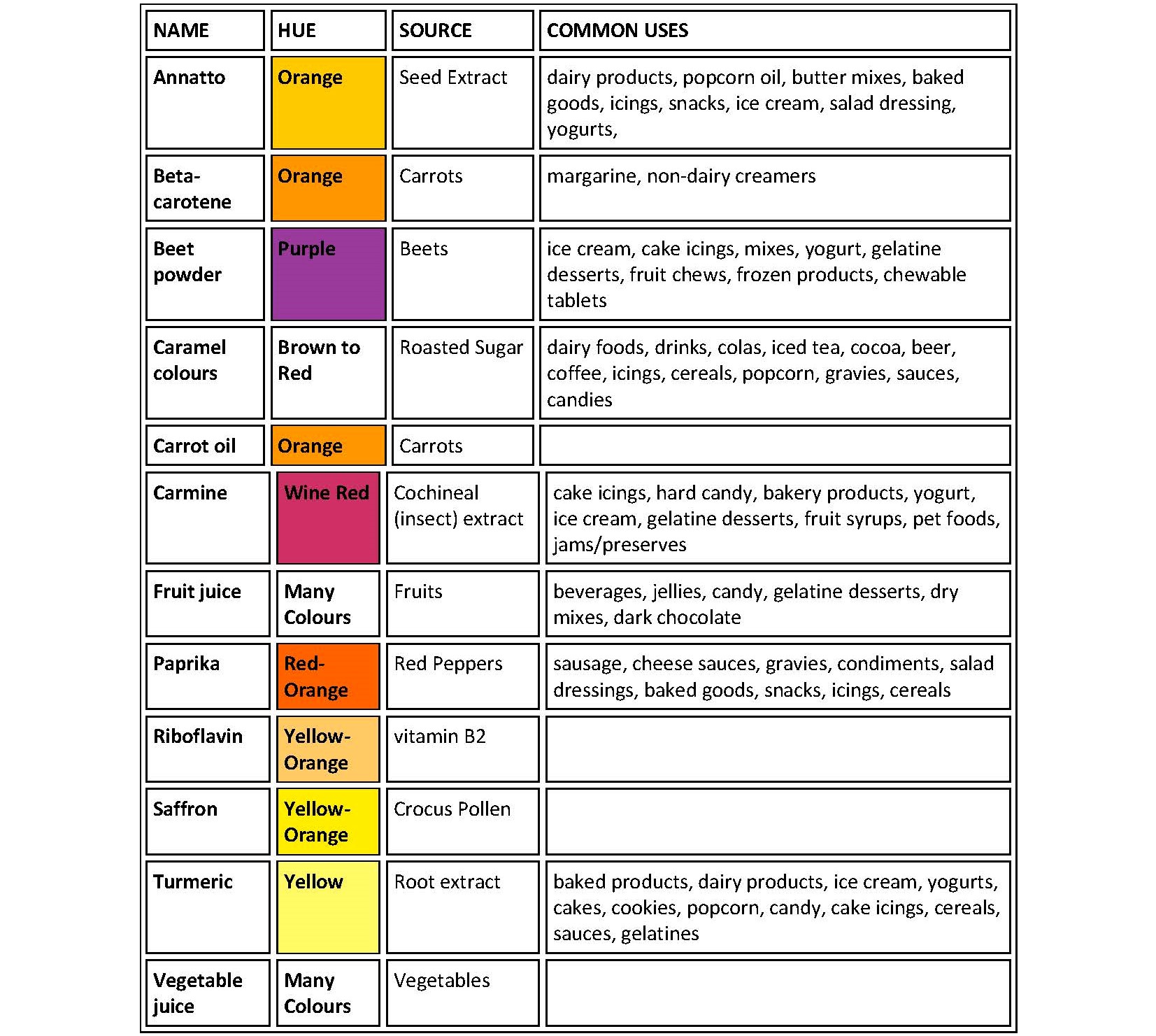 Natural dyes do not have as concentrated colour as artificial ones. Thus, more must be used, which may affect taste. They’re also more sensitive to heat, so colours may vary.  Now, 30%-40% of the nation’s food is coloured with naturally-derived food dyes.  Organic food has no added dyes or preservatives.

On food labels, artificial dyes are often identified by their alternative names.

Dyes Red #40 and Yellow #5 have come under fire. However, the FDA has found no conclusive evidence to link these dyes to child behaviour or ADHD.

A U.S. study published in Science found that when children who scored high on a scale measuring hyperactivity consumed a food-dye blend they performed worse on tests that measured their ability to recall images than when they drank a placebo.

The US Food and Drug Administration divides food colourants into two categories: Certifiable Colour Additives which are derived from petroleum distillates or coal tars and are essentially synthetic chemicals created in laboratories. These are often referred to as "artificial" colours.

Not all colours can be used in all foods (this is where the food science part comes in) Some colourants don't tolerate temperature extremes well, some work within a narrow range of acidity. The food chemist needs to analyse the food to be coloured for fat content, proteins, and enzymes, expected temperature ranges, exposure to light and heat and desired shelf life. From all those variables (and the desired colours) can they determine which food colourant is best suited for the job.

You may have noticed that Annatto is commonly used to colours dairy products an orange or yellow colours. This is because Annatto binds to the proteins in milk and is particularly well suited for that task. Turmeric tends to fade with light exposure so you won't find it in products that will be stored in a clear container on an open shelf. Carmine, because it is derived from insects, can never be consider Kosher. While the food scientist has a broad palette of colours to choose from, it takes a deeper study of the requirements to come up with the optimum colourant. 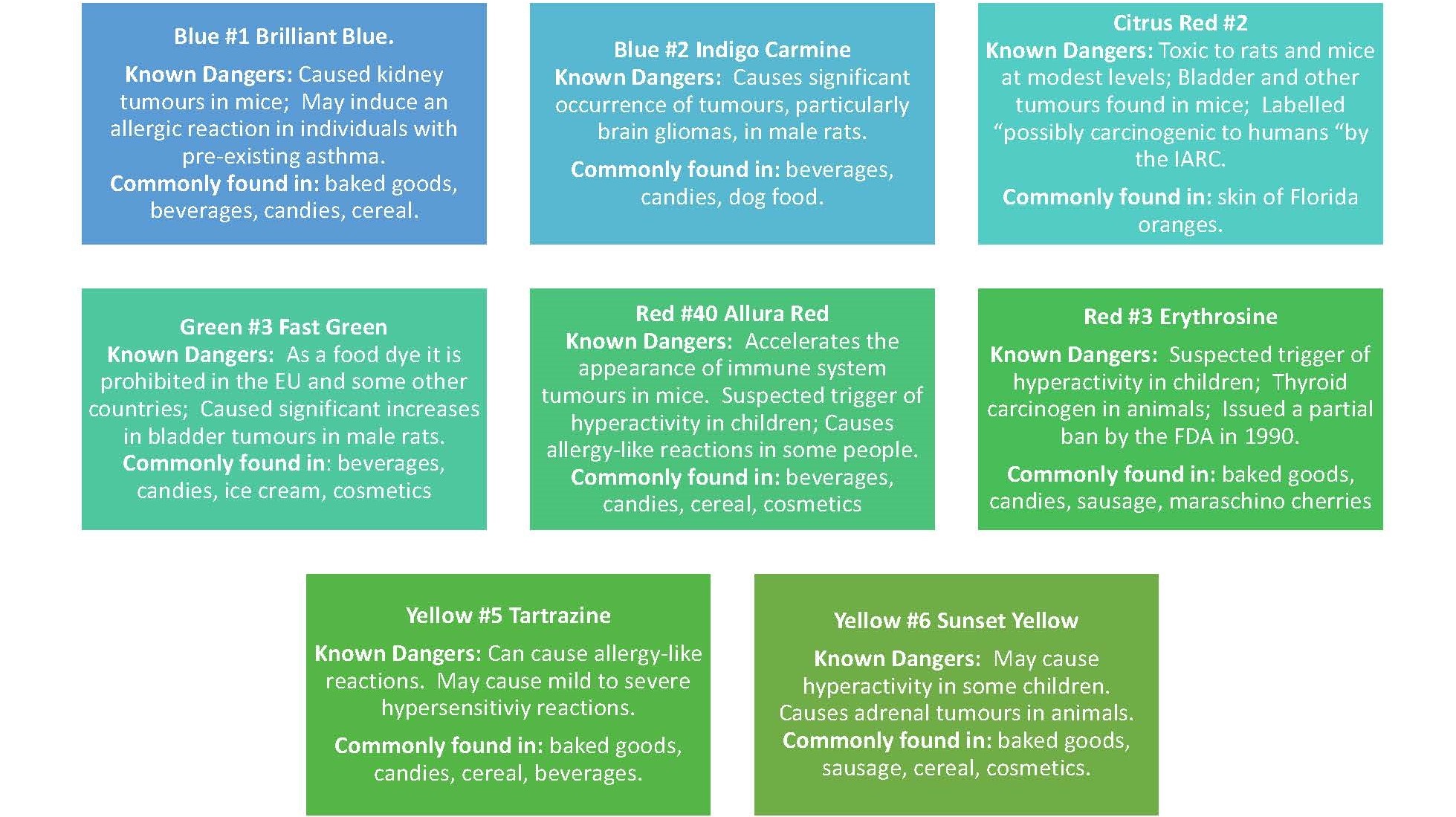