This section is highly controversial.

We all know the dangers of asbestos.   Mesothelioma lung cancer patients more than most.  We know that research shows Dioxins cause cancer. Yet you can find them in animals and fresh water fish. What other environmental toxins cause cancer?

The FDA in America has declared chemicals like Formaldehyde and Dichlorobenzene carcinogens. Yet, you can find them both in plentiful supply in your home.

Even drugs are not beyond increasing cancer risk. Especially when older people may take cocktails that have never been through research, let alone a clinical trial. Polypharmacy illness due to taking a cocktail of prescription drugs is 28 per cent of total admissions at the New York Presbyterian Hospital, and is the number one cause of death in Florida in the USA.

What has this to do with preventing cancer?

How about chemicals that do not directly cause cancer? What about chemicals that increase the oestrogen levels in your body, or weaken your immune system?  What about Bisphenol A - in white linings of cans, plastic toys, baby´s feeding bottle? Banned in Canada, a known oestrogen mimic; a xenoestrogen.  Or Parabens, a common preservative. Or phthalates released from the plasticisers used in plastic cups and bottles especially after the liquid contents became warm.  Or perfumed products - perfumes can contain any of about 150 ingredients, and they don´t have to be labelled. Some contain toluene (also in some nail polishes). It is a xenoestrogen and has been linked to brain tumours. There are other ingredients. One in the blood stream is DEHP which in pregnant mothers has been linked to higher rates of genital deformity in male offspring. Even testicular cancers in some cases.

Want to prevent cancer? Look into Pesticides. The UK Government didn´t mention them in its White Paper on cancer. But the EU has, talking abiut health risks and even cancer. Not surprising really. DDT and Lindane were linked to Four-fold increases in breast cancer in Israel before they were banned. Mind you, the Western Governments only banned their sale in the West. You can still find them on a vegetable from a third world country in a green grocer near you.

Fifty per cent of cancers may be your fault - you smoke, you are overweight, you go in the sun  too long (short healthy bursts in the early and late sun is good for you!) and you eat a poor diet.

So, what´s the other 50 per cent - and why isn´t it even mentioned on most of the big cancer charity web sites?  Cancer prevention? If you really want to prevent cancer you need to know the Truth - what factors have been shown in research to increase the risk of cancer, either directly, or indirectly. Understand these and you really will have a greater chance of preventing cancer - for yourself and your family.

Childhood Cancers on the Rise

"The incidence of childhood cancers has unequivocally been going up for the last 20 years, at about a 1% increase per year," said Dr. Clapp during the teleconference.

Fortunately, mortality from childhood cancer has been decreasing during this same time period, he reported.

He also noted that "we know a lot more than we did in 1975 about the things that cause cancer in both children and adults, and it's clear that at least one component of the cause is environmental chemical exposure."

"It's not in every child for every cancer, but certainly some portion of childhood cancers can be traced back to damage done at the cellular level by chemicals that are carcinogens," said Dr. Clapp.

Dr. Clapp pointed to examples of chlorinated solvents, such as trichloroethylene and carbon tetrachloride, that have entered community water supplies and have been implicated in the childhood cancer clusters found in Woburn, Massachusetts, and Tom's River, New Jersey.

Last year, the President's Cancer Panel provided evidence that exposure to toxic chemicals is an important and underrecognized risk factor for cancer, and recommended that the government take immediate action to reverse this trend. As reported by Medscape Medical News at that time, the panel noted that it was "particularly concerned to find that the true burden of environmentally induced cancer has been grossly underestimated."

The Safer Chemicals, Healthy Families coalition fully supports the need for updated legislation. It points out that in the 34 years since the TSCA was enacted, the Environmental Protection Agency has been able to require testing on just 200 of the more than 80,000 chemicals produced and used in the United States.

A number of substances are known to be related to the development of cancer, explained Dr. Palfrey. These include tobacco, ionizing radiation, asbestos, magnetic fields, pesticides, industrial solvents, and some viruses.

In normal circumstances, the body has learned to protect itself from toxins in one way or another, he said. But in the current situation, a huge number of new chemicals are entering the environment that the body has never been exposed to.

"Our bodies don't know how to detoxify themselves or to prevent these chemicals from being absorbed," Dr. Palfrey said during the teleconference. "Unfortunately, we may end up storing them."

When this happens in pregnant women, the stored chemicals can be released and circulated in the fetal blood and breast milk. "What we're finding is a multigenerational problem; if mom is exposed, it may get into the fetus."

We are not doing what we should to protect our children.

Dr. Palfrey noted that the concern is that many of these substances being released into the environment are largely untested in adults or in children, who are even more vulnerable. "People like me have been tested to see if we have some of these compounds in our blood and urine and sure enough we do," he said.

The blood from umbilical cords has also been tested, and it has been found to contain many of these compounds, Dr. Palfrey added. "We are not doing what we should to protect our children, despite the fact that we may be very concerned about this issue."

What can you do?

We have known from studies over the years that environmental factors contribute to many cases of cancers in general and in particular breast cancer. A majority of breast cancers are due to excess hormones-estrogen in particular. There are over 10,000 registered chemicals that have estrogen-like effects, in addition to being toxic and carcinogenic. These environmental estrogens are called xenoestrogens. It is common sense that a dramatic reduction in exposure to xenoestrogens in our environment can correspondingly lower the risk of breast cancer.

The importance of environmental toxins and cancer was highlighted by a report released last week in the USA by the President's Panel on Cancer. Here is what the panel recommended to avoid exposure to toxic chemicals that may increase the risk of cancer:

Take a look at the chart - How To Avoid Environmental Toxins, for more information. 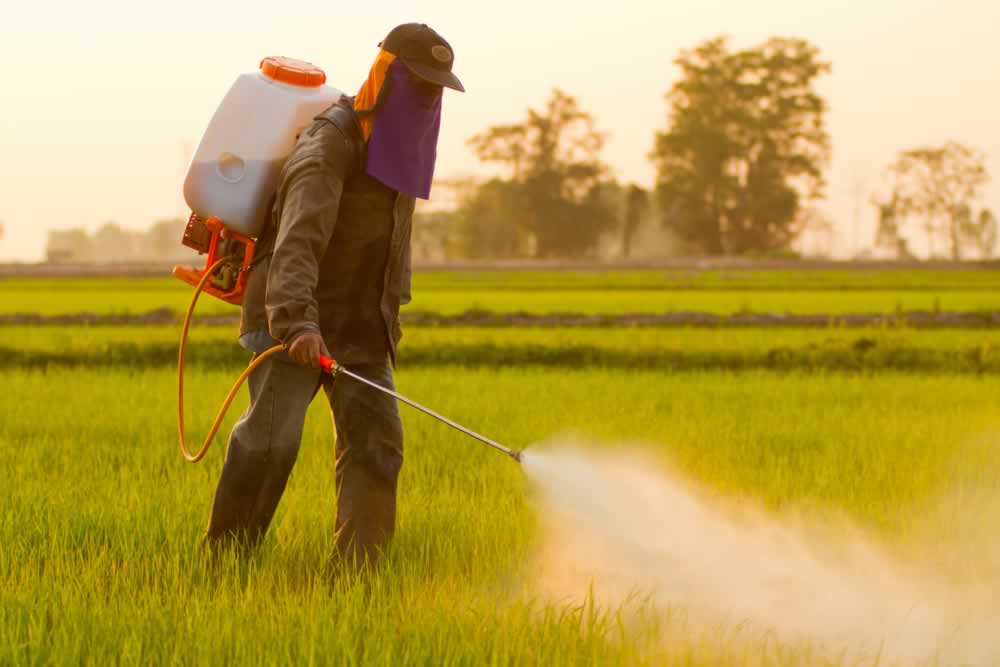 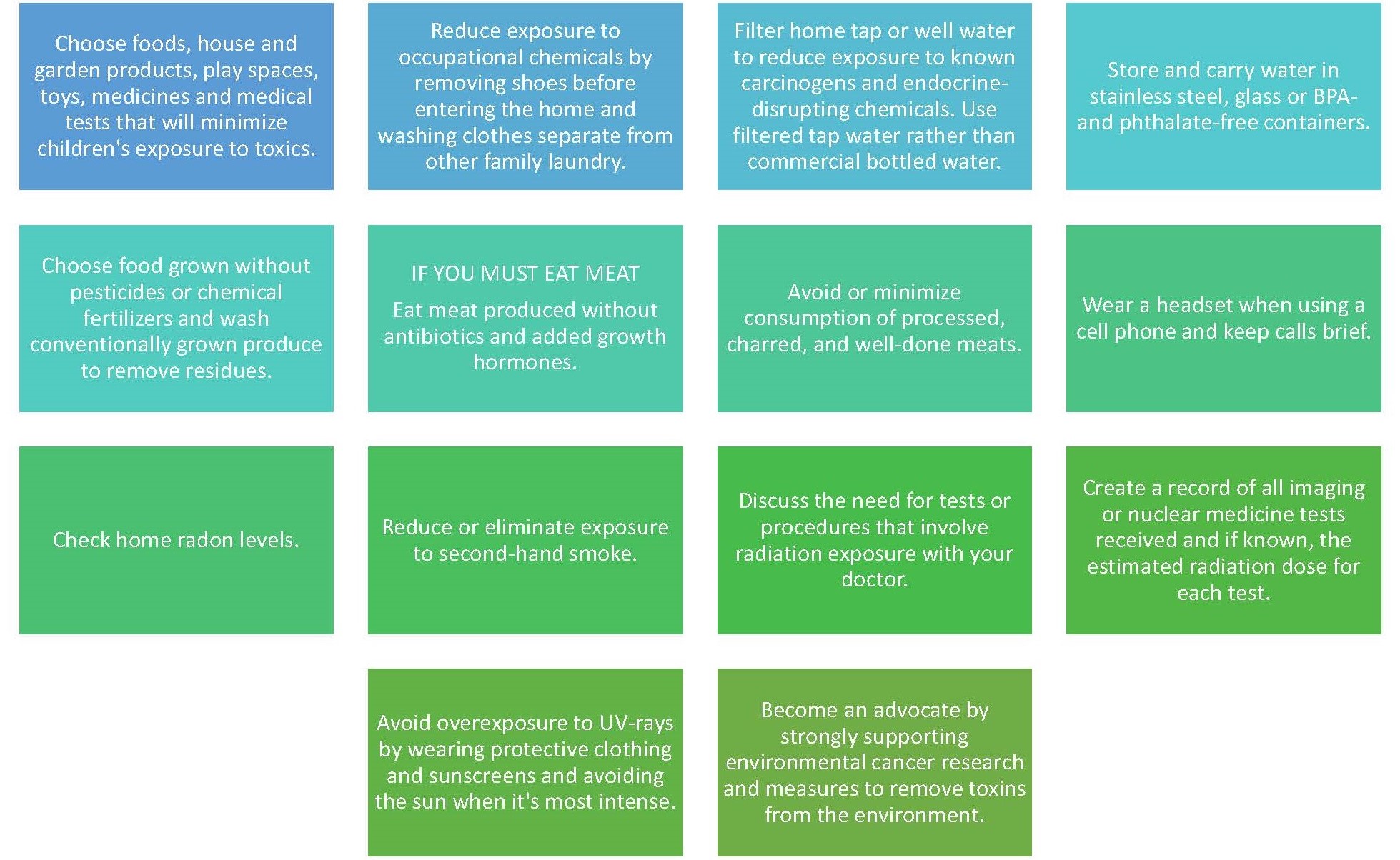 How To Avoid Environmental Toxins