Natural Cycles That Rule Our Health

All life on earth evolved in an environment ruled by cycles.  There are the big cycles such as the almost unfathomable scale of time over which the temperature of the planet changes.  And there are the small cycles – the daily cycles of light and dark, the seasonal cycles that move our weather from warm to cold and back again and even the monthly cycles that trigger a woman’s menstruation.

Some would argue that our increasing sophistication and the complexity of modern life means that humans are no longer influenced by these cycles. After all, we can turn on electric lights at night to keep the darkness at bay.

Women can take birth control pills that replace their natural monthly cycles with a more ‘convenient’ and regimented man-made one. We have homes, offices and schools that protect us from the extremes and vagaries of seasonal weather. Interventions such as these give the illusion that we are the architects of our environment and are no longer slaves to the cycles of nature.

And yet biological cycles ranging from minutes to years occur throughout the animal kingdom. These cycles reveal themselves in hibernation, mating behaviour, body temperature, blood pressure and a vast number of other physiological processes.  All living things are tied to these cycles.

Rhythm is Gonna Get You

Every cycle has its own unique rhythm and yet each cycle is also synchronised to many others; our body temperature cycle is, for example, synchronised to our sleep-wake cycles. Some of these rhythms – such as our heart rates and menstrual cycles – are controlled by internal, usually hormonal, factors. These rhythms are called endogenous, because they arise from within the human body.

A variety of external factors also regulate our body rhythms; our responses to light and dark are a good example. These rhythms are called exogenous, because they arise from our environment.  Recent research suggests that these external factors are the greater influence and may even be the organising force behind our endogenous cycles.

Exogenous triggers are also known as zeitgebers (from the German meaning ‘time givers’). Common zeitgebers include sunlight, noise, social interaction and conventions such as meal times as well as man-made devices such as alarm clocks.

Rhythms that show cyclic changes on a daily (or less) basis are known as circadian rhythms. This cycle moves to an approximately 24-hour rhythm and is probably the best known of the natural cycles.

Circadian rhythms are evident all around us. Plants open and close their petals with the sun. Activities associated with photosynthesis synchronise the release of fragrances and pollens according to the time of day. In the wild, animals follow fairly predictable daily cycles of waking, hunting, eating and resting.

In humans, the sleep–wake cycle is the most obvious and extensively studied of the circadian rhythms. At regular intervals each day, the body also tends to become hungry, tired, active, listless or energised. Body temperature, heartbeat, blood pressure and urine flow cycle rhythmically throughout the day.

Levels of many hormones, such as ACTH-cortisol, thyroid-stimulating hormone (TSH) and growth hormone (GH), also rise and fall in this relatively predictable, daily rhythmic pattern initiated and governed in part by exposure to sunlight and darkness.

These daily cycles can work to our advantage. Aerobic exercise is most likely to be of benefit between the hours of 4pm and 7pm, when your heart and lungs are strongest, and your metabolic rate is highest. Taking certain medicines at the right time in the body’s cycle may make them more effective.

But most humans tend to ignore the intricacies and demands of their circadian cycles. To live in the modern world many of us work at night and sleep during the day. Even when we are obviously tired we tend to stay up late working or partying. If we have an energy dip in the late afternoon, we tend to meet it with coffee and other stimulants rather than responding to it by resting.

Awake when we should be sleeping and resting when we should be awake it is hardly surprising that our bodies so often develop the symptoms indicative of a system out of sync. Sluggishness and lethargy are the most typical signs, but digestive problems, headaches, depressed mood, poor memory and lack of coordination are also common.

Travelling across time zones can create a very specific type of desynchronisation between our internal clocks and the prevailing light–dark cycles. Known as ‘jet lag’, its symptoms may also signal that we have become out of sync with the spin of the earth.

Our planet spins from west to east and this is the directional spin in which we evolved. Flying against the spin of the earth – from east to west – generally results in greater disruption of the circadian cycle because it requires the body to delay its release of sleep-inducing melatonin – usually achieved by exposing yourself to lots of bright light and other external cues, even when you are exhausted and need to go to bed. As a rule, it takes one day to fully adjust to every one-hour’s time zone crossed during a flight.

International travel isn’t the only thing that can leave us out of sync. Mistimed conventions such as the time our work or our school starts also have an impact and recent evidence suggests that these may even have a dumbing-down effect on our children.

Our need for sleep varies according to age and teenagers require much more sleep than adults in order to support the tremendous changes and growth that are going on in their bodies. It is believed that teenagers need around 9½ hours per night to remain healthy yet this amount can be difficult to obtain. One reason is that the release of melatonin in teenagers is delayed (in other words happens later in the night). This is why teenagers commonly feel so alert at night and so sleepy in the morning.

The normal physiology of teenagers plus rising early for school can mean that teenagers accumulate approximately three hours of sleep debt per night. In the US, where schools tend to start much earlier than in other countries, ignoring this fact has implications for students’ educational progress. In the book the Promise of Sleep, author William Dement notes that when the school start time was changed from 7.20 to 8.30 am in one US state, the result was higher test scores and fewer behavioural problems.

Within each 24-hour cycle is a shorter 12-hour cycle. A good example of this is the common experience of the ‘post-lunch dip’ (PLD). While the timing and intensity of the PLD can vary from individual to individual, most of us experience it to some extent each day. PLD can, of course, be caused or made worse by inappropriate food choices (such as high glycaemic index snacks and meals) but there is also evidence that PLD is more than just a nutritional phenomenon. Brain EEG signals emitted during PLD are very similar to those emitted during REM sleep and this has led some to speculate that the PLD is a 12 hourly or circasemidian fluctuation in our sleep–wake cycle.

Within each circadian cycle is a much shorter ultradian rhythm, approximately 90 minutes in duration. During the day, we go through many ultradian peaks and troughs which can be experienced as alterations in mood, attentiveness, wakefulness and performance.

Some ultradian rhythms are too subtle for us to notice. Dermatological studies show that skin goes through many cyclical changes throughout the day.

Other ultradian rhythms simply get ignored because we live such fast-paced lifestyles. However, when we are asleep they are quite pronounced. Throughout the night (or whenever we sleep), our bodies go through an approximately 90-minute cycle involving REM (rapid eye movement, or dream) sleep and non-REM (deep) sleep periods. Disruption of these REM cycles can lead to insomnia, fatigue, loss of concentration and memory and mood disorders.

In addition to circadian rhythms the human body is subject to a range of other biological cycles of different frequencies.

There are, for instance, circaseptan or weekly rhythms. Some physicians believe that transplant patients tend to have more rejection episodes seven, fourteen and twenty-one days after surgery and that this is reflective of some circaseptan mechanism we don’t yet fully understand.

It has been suggested that such responses may be tied in to geomagnetic activity that also follows weekly and even half-weekly (circasemiseptan) cycles.  Some studies have shown that there are pronounced weekly rhythms in neonatal blood pressure and heart rate suggesting that from the moment of birth humans ‘lock into’ the pulse of the planet.

Infradian cycles are approximately 28–30 days. The most obvious of these is the menstrual cycle with its cyclically fluctuating levels of estrogen and progesterone. There is now evidence that synchronising breast cancer screening and breast cancer surgery to this cycle is important to both the accurate detection and the course of the disease.

Another approximately monthly cycle is the circalunar cycle. For some women, their monthly menstruation also follows this lunar cycle, though opinion is divided on whether the menstrual cycle will naturally, in the absence of modern disruptions, synchronise with the normal lunar cycle.

There is also a circannual cycle. In the natural world, this cycle reveals itself through the seasonal changes in plants and in animal behaviour.

Some seasonal changes – such as Seasonal Affective Disorder (SAD, or winter depression) – appear to be dependent on day-length. Like other animals, humans secrete melatonin exclusively at night. This secretion is interrupted when exposed to light during the nocturnal period, as well as when daybreak comes. Our brains detect not only light and dark but also changes in the relative length of day and night and makes proportional adjustments in the length of time that melatonin is secreted throughout the night.

Researchers believe that melatonin production increases in winter, leading to an increased urge to sleep and a reduced desire to interact with others. Melatonin levels generally decrease with age, but the elderly do experience seasonal shifts, and in these individuals SAD may worsen with age. Natural or artificial sunlight, especially in the early morning, suppresses melatonin production, thus improving mental health.

Annual cycles are harder and more costly to study than the shorter circadian cycles, however research in this field has revealed seasonal fluctuations in other hormones.

There is evidence, for instance, that compared to healthy women, those with breast cancer appeared to have a malfunction in the annual fluctuation of the hormone prolactin.

In another study of ‘cancer chromatics’, blood samples taken at various times of year from women in the Channel Islands were stored and the women monitored to see which ones developed breast cancer. The healthy women showed an annual cycle in the secretion of prolactin as well as thyroid stimulating hormone (TSH) that was absent in those that went on to develop breast cancer.

By Pat Thomas - NYR Natural News  - Adapted from Under The Weather: How weather and climate affect our health by Pat Thomas (Vision/Fusion Press). 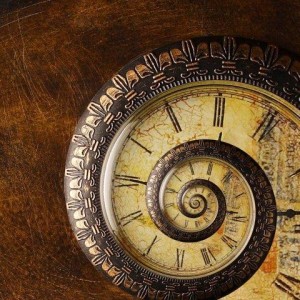 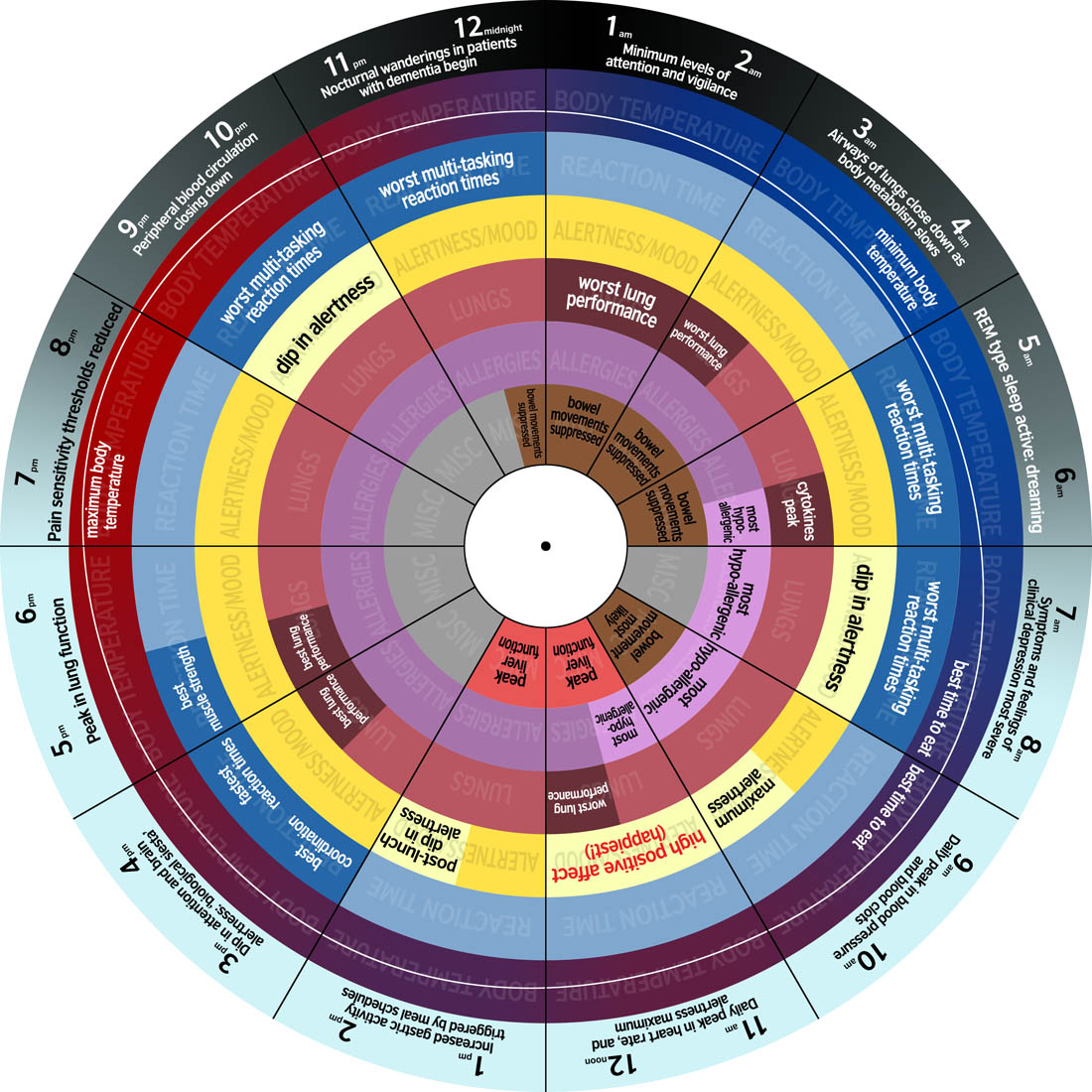