Cayenne is part of the Capsicum genus and is a Chili pepper variety. Its scientific name is Capsicum annum longum group.  Cayenne is a stimulating herb that is well known for its pungent taste and smell. Cayenne is a popular spice used in many different regional styles of cooking, but it has also been used medicinally for thousands of years. The name cayenne is derived from a Tope word, “kyinha.” The cayenne plant produces long red peppers and grows to a height of 2–6 ft. (0.5–2 m). The plant is native to tropical areas of America and is cultivated throughout the world in tropic and subtropic climate zones. Most of the United States’ cayenne supply is imported from India and Africa. Cayenne is a member of the genus Capsicum. Other species of this genus include Tabasco peppers, African peppers, Mexican chili peppers, bell peppers, pimentos, paprikas, and bird peppers. Cayenne is often referred to as chili, which is the Aztec name for cayenne pepper.

The main medicinal properties of cayenne are derived from a chemical called capsaicin. Capsaicin is the ingredient that gives peppers their heat. A pepper’s capsaicin content ranges from 0–1.5%. Peppers are measured according to heat units. The degree of heat determines the peppers’ value and usage. Generally, the hotter the pepper, the more capsaicin it contains. In addition to adding heat to the pepper, capsaicin acts to relieve pain and reduce platelet stickiness. Other constituents of cayenne are vitamins C and E and carotenoids.

Cayenne has anti-inflammatory, antioxidant, antiseptic, diuretic, analgesic, expectorant, and diaphoretic properties. The dried ripe fruit and seeds of the plant are used for medicinal purposes. Cayenne is available in many forms, including capsules, ointments, liniments, tinctures, creams, oils, and dried powders.

Cayenne was originally grown in Central and South America in pre-Columbian times. It was cultivated in

Mexico 7,000 years ago and in Peru 4,000 years ago. Native Americans have used cayenne as a food and as a medicine for stomach aches, cramping pains, gas, and disorders of the circulatory system for 9,000 years. Cayenne was brought to Europe in the fifteenth century by Christopher Columbus. From Europe, cayenne was transported to tropical regions around the world, where it is now grown.

The cayenne chili pepper is a bright red chili ranging from 2-5 inches long and about 1/2 inch in diameter. Cayenne chilis are usually sold as a powder, as cayenne pepper.

The word cayenne comes from the city of Cayenne in French Guiana. Cayenne pepper is great in soups and sauces, on pizzas, as well as over meats and seafoods. Keep it on the table in a shaker as an alternative to salt or pepper.

One Ayurvedic remedy for pain combines cayenne and mustard seeds into a paste to be applied to the affected area. Ayurvedic medicine also utilizes cayenne to treat gas and poor digestion. Chinese medicine employs cayenne for digestive ailments. An ointment or tincture made from cayenne is used in China and Japan to heal frostbite and myalgia (muscle pains). The German Commission has approved cayenne in the treatment of painful muscle spasms, arthritis, rheumatism, neuralgia, lumbago, and chilblains.

Cayenne is a proven remedy for the temporary relief of pain, both external and internal. Its analgesic effect acts to distract sensory nerves from the irritation or pain, which results in a temporary abatement of pain. The capsaicin in cayenne depletes substance P, a chemical that sends pain signals to the brain from the local nervous system. When there is a lack of substance P, the sensation of pain diminishes because it cannot reach the brain.

Capsaicin has been approved by the United States Food and Drug Administration (FDA) for pain caused by shingles, an adult disease that is caused by the virus that causes chicken pox in children. Such over-the-counter (OTC) creams as Zostrix or Heet contain capsaicin and are applied externally to treat rheumatic and arthritic pains, cluster headaches, diabetic foot pain, fibromyalgia, and post-herpetic nerve pain. These creams usually contain 0.025–0.075% capsaicin.

Research in 2002 helped to quantify capsaicin’s pain relieving effects. Creams containing the compound lowered pain in arthritis sufferers’ hands by 40 percent when used four times a day and 77 percent of people with pain from long-term shingles had reduced pain after using the cream for four months. The study also said that capsaicin-containing cream is less expensive and safer than other painkillers used for the same conditions.

Cayenne can be an effective remedy for relieving congestion and coughs. It acts to thin mucus, thus improving the flow of body fluids. It is also used to boost energy and relieve stress-related fatigue and depression.

Late in the 1990s, British journals reported that people taking cayenne daily increased their fat metabolism and had decreased appetites. In addition, cayenne can be used as a treatment to prevent thumb sucking and nail biting in children.

Asthma patients who are taking theophylline should consult a physician before taking cayenne. Cayenne may increase the amount of theophylline absorbed by the patient’s system, thus possibly leading to toxicity.

For more information on Cayenne and Chillis visit this page: Chili Pepper  and paprika 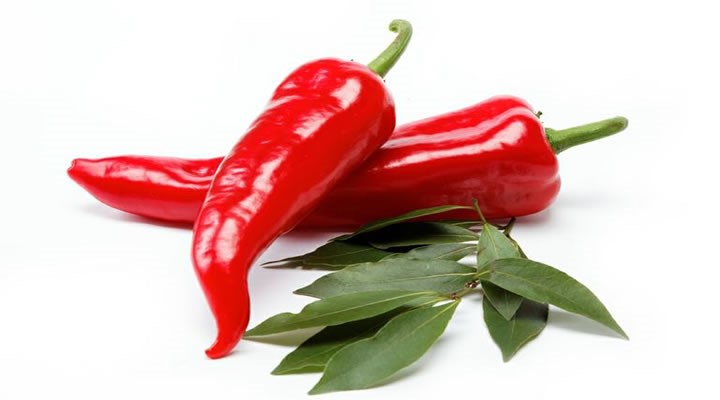 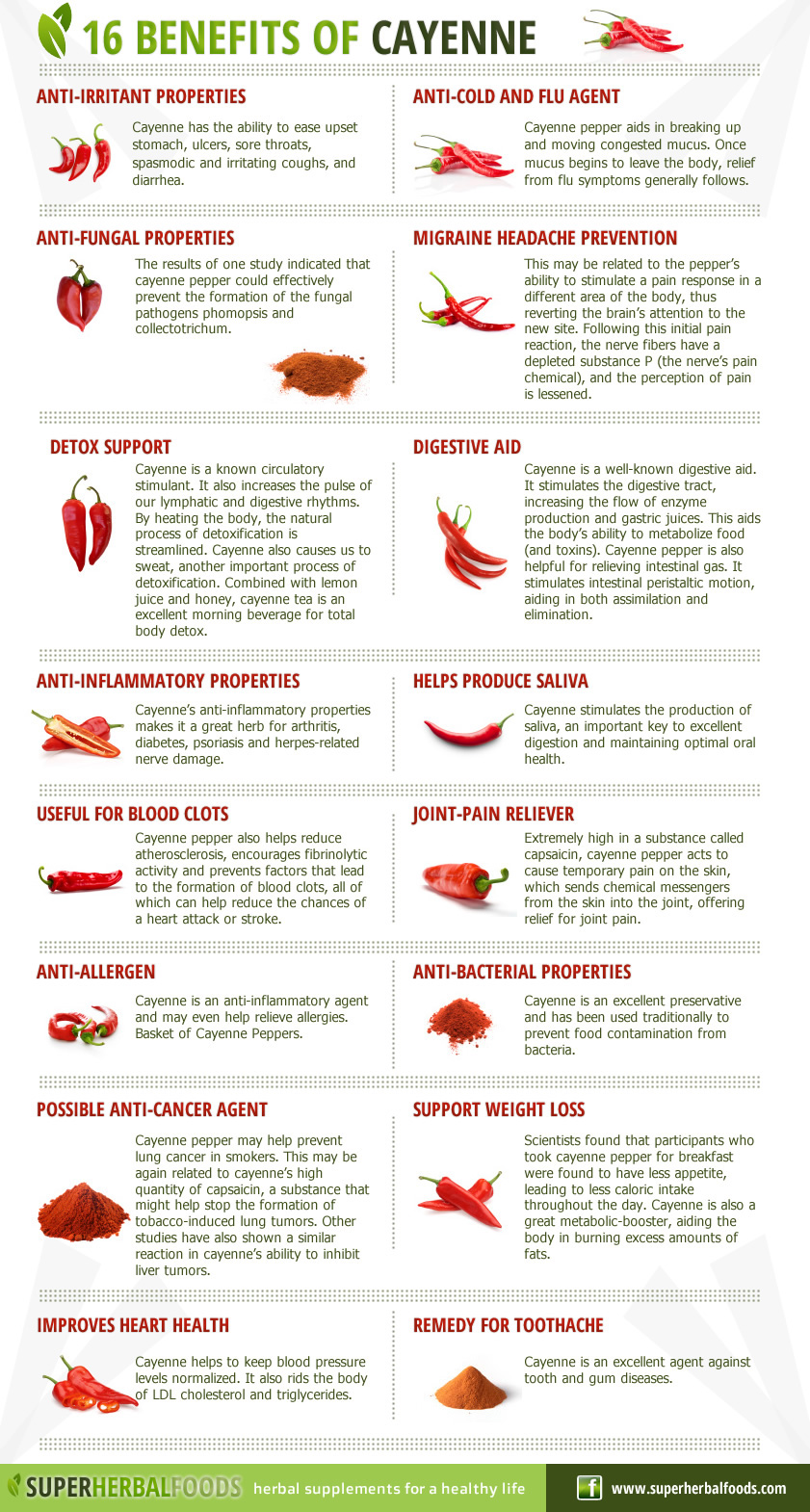