Pot marigold, also known as Spanish marigold, has a long history of being used as a medicinal herb.  Its medical application is at least as old as the 12th century.  This herb contains flavonoids (natural antioxidants) and other chemicals that can stop some fungi, bacteria, and viruses.  Frequently the dried pot marigold flowers are used to infuse oil or water.  The infused liquid is then applied topically to the area being attacked by yeast.  There is research showing that this plant can inhibit multiple types of Candida; making it an ideal choice to use for such infections.  Pot marigold may stimulate menstruation, so if you’re pregnant, you should avoid using it.

Pot marigold (Calendula officinalis), also known as Spanish marigold, has a long history of being used medicinally.  Use for pot marigold dates back to at least the 12th century.  Pot marigold is naturally high in chemicals called flavonoids.  Flavonoids are natural antioxidants that help protect the plant from unstable free radical molecules.  In addition to being a competent killer of the yeast which causes human yeast infections (Candida spp.), pot marigold is also able to fight inflammation, kill many types of bacteria, and is a capable antiviral.  Common pot marigold for yeast infection is a viable, safe way to naturally treat yourself.  You can find pot marigold in dried form in herbal pills.  You can also procure pot marigold essential oil and use it for a yeast infection as well.  Try using both for a superior natural remedy!

Pot marigold is very safe to use and can be made into a tea, soaked in oil, or directly inserted into the vagina.  To get the best results, it would perhaps be best to use the herb all three ways.  Make a tea of the flowers and drink it daily.  Collect the flowers, dry them, and let them soak in a base oil of some kind.  Apply the oil directly to the vagina or infected area to fight Candida.  Along with putting the pot marigold oil in the vagina, you can also insert the dried herb directly into the vagina as well.  It’s really up to you on how you want to use this herbal remedy; but, the way to get the maximum effect is to use it in all these different ways.

It is best to use dried marigold flowers for making infused oils; the higher water content of fresh flowers will increase the chance of spoilage.  If you grow your own pot marigolds, simply spread them out on a plate and let them dry in the sun.  Turn them over every other day or so.  This drying will need to be done for about one week.  If you don’t have your own flowers, you can always buy some dried Calendula / pot marigold from an online herb store--probably the easiest way to get this herb!

Directions for making your marigold oil:

One study, published in the Brazilian Journal of Microbiology (vol.39 no.1 São Paulo Jan./Mar. 2008), is very relevant to our discussion of pot marigold as it used this herb against many different species of Candida.  The study used pot marigold flowers that were collected right before the onset of winter in the Southern Hemisphere.  The marigold flowers were dried in a lighted room for 20 days at 25 degrees Centigrade.  The flowers were then put through a steam distillation process to produce an essential oil from the herb.  This essential oil was then tested against Candida albicans, Candida dubliniensis, Candida parapsilosis, Candida glabrata, Candida tropicalis, Candida guilliermondii, and Candida krusei.  Thus, since it was so thorough an examination of Candida species, it is likely very relevant to the yeast attacking your body.

The chart below shows the results of the study.  23 strains of yeast were used and the test was done twice.  The mean inhibition zone in millimeters was calculated for 15 microliters of marigold essential oil.  As you can see, it produced superior results than did 20 microliters of the prescription antifungal drug nystatin.  Thus, you are going to see your yeast infection react even more to marigold essential oil than it does to nystatin!

Another study, published in Complementary Therapies in Clinical Practice (Volume 18, Issue 3, August 2012, Pages 173–176), also looked at how pot marigold flowers would inhibit various Candida species.  The test used ethanol and menthol extracts of Calendula officinalis; the extracts osmolarity (ratio of solute to solvent) was 10 milligrams per milliliter.  Discs containing various Candida isolates were impregnated with 30 microliters of the Calendula officinalis extract.  Also used in the study was 30 microliters of fluconazole against the various Candida species.  After applying the marigold extract, the trays with yeast on them were incubated for 24 to 48 hours and then examined.

The results showed a good antifungal efficacy of marigold extract; nearly as good as pure fluconazole.  This efficacy would probably have increased had a higher concentration of Calendula been used; say 20 mg / mL.  The chart below shows the results of the study.

Pot marigold can possibly stimulate menstruation; therefore, pregnant women should not use it as it can interfere with pregnancy.  Also, women trying to conceive should avoid pot marigold as it may make it difficult to conceive while using this herbal remedy.  If you are allergic to plants in the aster or daisy family, including chrysanthemums and ragweed, you may also be allergic to pot marigold.  The reaction is typically a skin rash.  You may wish to try some of the oil on a small patch of skin before you use it in your vagina to see how your body reacts.

At the date of this writing, there are no known scientific reports of pot marigold interacting with medications or other herbs.  It should be considered generally safe to use and not likely to cause side effects. 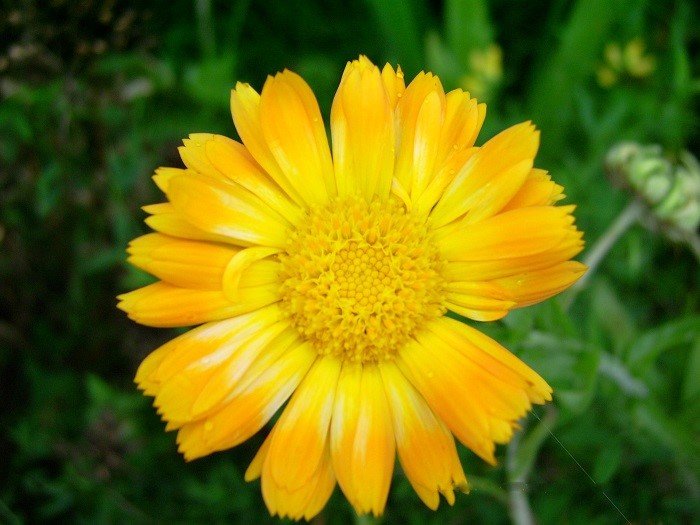 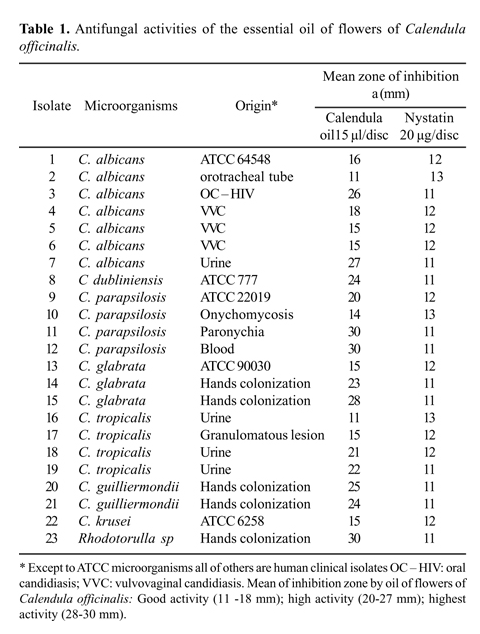 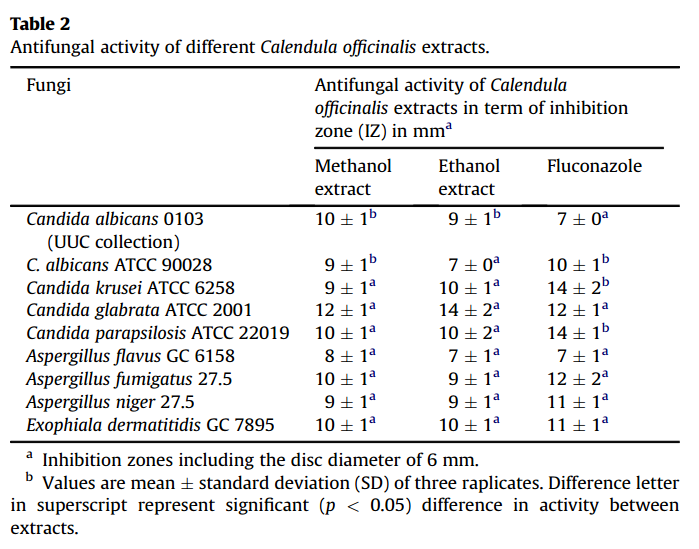