Licorice has long been used in india; there, it is used in over 1000 different Ayurvedic remedies.  For use against Candida, licorice is packed with about 25 different chemicals that are known antifungals.  You can take this herb internally and use it externally as a topical treatment.  Licorice root can also stop Candida biofilm and germ tube (hyphal) growth.  Consequently, licorice should be an herb you try to procure for your herbal yeast infection treatment.

Licorice (Glycyrrhiza glabra) has long been used by people to treat a wide variety of health maladies for thousands of years.  Licorice is used extensively in Ayurvedic and other traditional medicinal practices.  In the ancient art of Ayurvedic medicine, there are over 1250 remedies that use licorice as an ingredient.  Many of these ancient remedies have been used successfully in various infectious conditions.  Even western medicine has utilized this medicinal herb to treat various diseases.  Some of its uses include acting as a demulcent, expectorant, and coating agent.  In addition to its many medicinal uses, licorice root is a powerful antifungal and contains several different chemicals that disrupt fungus--about 25 different compounds to be more specific.  Consequent to its phytochemical makeup, licorice root is a great herbal remedy for yeast infections.

Standard Protocol for Internal Use

You should be able to safely use some ground licorice root powder in a vaginal douche or carrier substance like oil or honey.  Simply add the ground licorice root in and apply it where you have Candida causing problems.  As the studies below will prove, it only takes a little of this herb to start getting rid of noxious yeast.  You can also make a strong decoction of licorice root powder and apply it topically to the infected area.  Just add 5 to 7 teaspoons of powdered licorice root to a cup of boiling water and let it simmer for about 20 minutes.  When the simmering is done, take a cotton ball and use it to apply the liquid to your body.  Do this one to three times a day.  You can also use it as a vaginal douche.  Try using apple cider vinegar instead of water to make the decoction an even better remedy!

The first study we will examine was published in Phytotherapy Research [23.4 (2009): 572-574].  The study looked at an acid present in licorice root known as 18-beta glycyrrhetinic acid (18-beta GA) and how it affected Candida albicans.  According to Dr. James Duke’s phytochemical database, this acid is present in licorice root in the amounts of 39,800 ppm to 168,000 ppm.  Parts per millions (ppm) is rather hard to conceptualize, so let’s put that in grams per liter!  This works out to about 40 grams per liter to 168 grams per liter.  And of course, these figures are dealing with an entire liter of licorice root.  There is likely to be some differences in the amount of 18-beta GA present in each individual licorice root.  If your licorice root product is made from multiple roots, there is likely to be more of an average amount (between these two extremes) of 18-beta GA in your product.

Another study, published in Mycoses [54.6 (2011): e801-e806], is very interesting and relevant to Candida albicans infections.  The study examined how chemical compounds present in licorice stop the hyphal growth (germ tubes that grow into your skin) and biofilm formation (biofilm, when present, increases the resistance of Candida to some antifungal drugs by over 1000 times).  These two activities, biofilm formation and hyphal growth, greatly increase the virulence of Candida albicans; thus, they are very relevant to see how well any treatment will work.

The study states this in summary of the ability of licorice to stop Candida albicans:

The lack of ability of glycyrrhizin to stymie Candida albicans in vitro, and the drastic change in survival rate due to glycyrrhizin affected T-cell transplants, indicate that glycyrrhizin acts on the immune system cells and augments their Candida fighting ability.  Consequently, licorice may be very beneficial to take internally as well as using it topically to bolster the body’s immune response to Candida overgrowth.

Side Effects of Using Licorice Root

Individuals with heart problems may want to avoid ingesting licorice or consult a physician before they take it internally.  Licorice contains glycyrrhizin and too much of this chemical can lead to pseudoaldosteronism, which causes over sensitivity to a hormone in the adrenal cortex.  This in turn leads to high blood pressure and can cause heart attacks.  Headache and fatigue can also result from this condition.  Typically ingesting large amounts of licorice will cause these conditions; but, there is a chance that ingesting smaller amounts will result in some side effects.

In addition to heart problems, ingesting licorice while you are taking corticosteroids, diuretics, or drugs that lower potassium levels can lower the potassium levels of the body to unsafe levels.

Taking large amounts of licorice can also manipulate the body’s level of a hormone called cortisol.  Additionally, pregnant women should avoid taking licorice internally as some research indicates it may lead to preterm labour.

In general, do not take large amounts of licorice root internally.  Stay within the safe internal doses and use it mainly externally in a douche or topical treatment.  This should be a safe way to get rid of a yeast infection without risk of unwanted side effects. 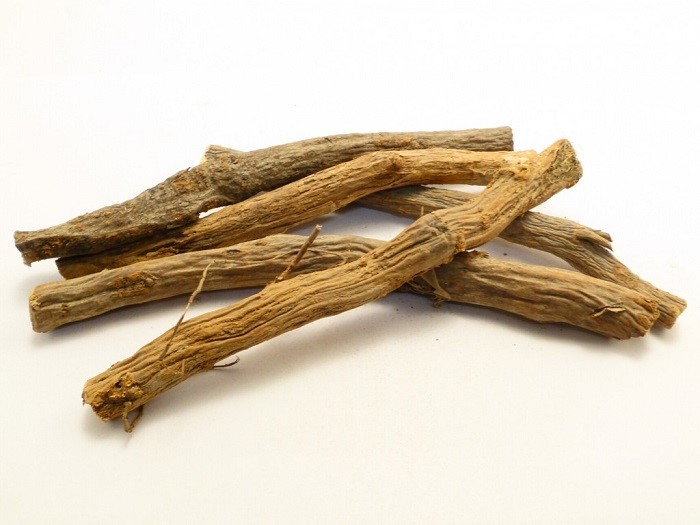