Goldenseal was traditionally used medicinally by the Native Americans long before modern science documented the herb’s healing qualities.  Goldenseal contains a few compounds (canadine, canadaline, hydrastine, and berberine) that are able to inhibit Candida.  Using goldenseal with fluconazole also increases the effectiveness of this prescription antifungal.  Use goldenseal to attack Candida with an assortment of natural substances that are toxic to its development!

Goldenseal (Hydrastis canadensis), whose common names also may be yellow puccoon or orange root, is a medicinal herb that has been used traditionally by Native Americans.  There have been many studies, as you will see, conducted on this herb’s efficacy as a Candida fighter.  There are many individuals who recommend this herb for the treatment of yeast infections; and, you can use it as well safely from home.  The power of goldenseal as an herbal Candida remedy likely comes primarily from berberine and hydrastine.  These two chemicals are both antifungal and occur naturally in goldenseal.  Plants that contain berberine have long been used traditionally to treat yeast infections and other fungal infections.

Goldenseal is a perennial herb in the buttercup (Ranunculaceae) family.  It is native to the eastern United States and southeastern Canada.  If you are fortunate to live in a similar climate, you may well be able to start growing your own goldenseal!  If you do not have any goldenseal on hand, you can purchase it as a bulk powder, tincture, pill, or salve.  You may want to get some type of goldenseal for internal use along with using it externally.  Eliminating Candida from the digestive tract is important for halting recurrent yeast infections.

How to use Goldenseal for a Yeast Infection

Chances are you do not have goldenseal on hand and you will have to buy it.  Fortunately, there are many ways to procure this medicinal herbal remedy.  You can buy a tincture of goldenseal and add it to juice and drink it 3 times a day.  This should give the yeast living in your digestive system a blow and help to control recurrent yeast infections.  Dr. James Duke, in his book The Green Pharmacy, recommends using it topically.  Dr. Duke suggest taking 5 to 7 teaspoons of dried goldenseal and adding it to a cup of water.  Bring the cup of water to a boil and then let the herb steep for 20 minutes.  Finally, strain the goldenseal out of the water and apply the tea topically to the infected area 3 times a day.

Another approach you could investigate is using apple cider vinegar instead of water for the decoction.  Just place 10 to 14 teaspoons of dried goldenseal into about two cups of apple cider vinegar.  Bring the mixture to a boil and then let steep for 20 minutes.  When the liquid has cooled, strain out the herb.  You can use this apple cider vinegar tea as a vaginal douche or you can simply apply it topically to the area on your body that is infected.

Also, if you can procure some dried goldenseal, you can grind the herb up thoroughly and add it to honey.  Honey is itself an inhibitor of Candida, and adding goldenseal to it should increase the rate at which you are healed.  There are other herbs you can add along with goldenseal for a natural remedy; you can even put a few drops of essential oil into the honey as well.

One study, published in Planta Medica [67.6 (2001): 561-564], found that the crude extract of goldenseal worked better against Candida than single alkaloid chemicals present in goldenseal.  The crude extract killed Candida albicans in 15 seconds versus 1 to 2 hours for the alkaloids (canadine, canadaline, hydrastine, and berberine).  There may very well be some degree of Candicidal synergy when all the chemicals in goldenseal are used together; this could explain the power of the crude goldenseal extract.  Thus, you would probably be better off using an herbal preparation or essential oil of goldenseal than you would be using just berberine alone.

Another study that shows goldenseal is a powerful herbal remedy for yeast infections was published in Mycoses (Vol. 54).  The study used strains of Candida albicans, Candida glabrata, and Candida krusei to evaluate the effectiveness of goldenseal as a natural treatment.  Goldenseal effectively inhibited the development of all the various strains of Candida used in the study.  This suggest that goldenseal will make an excellent herbal remedy for the treatment of yeast infections--no matter what species of Candida is attacking your body.

One study, published in Archives of Oral Biology [56.6 (2011): 565-572], examined the possible synergy of berberine with two other prescription antifungal drugs: miconazole and fluconazole.  The study found that berberine inhibited the growth of Candida species of yeast at 0.98–31.25 mg / L.  The order of susceptibility for these Candida species to berberine is, from greatest susceptibility to least, C. krusei > C. kefyr > C. glabrata > C. tropicalis > C. parapsilosis > C. albicans.  As you may have noticed, this dilution of berberine in the study is measured in liters, not milliliters.  Berberine was seen to work synergistically with fluconazole and miconazole against Candida species.  Also, of importance, is the result of using miconazole with berberine against Candida biofilm.  The combination of miconazole and berberine reduced biofilm formation by 91% after 24 hours.

Candida biofilm is significant as its presence can increase the resistance of Candida to some antifungal drugs by over 1000 times (Kahn, Ahmad. 2012).  Candida can protect itself by forming a layer of slime to cover itself.  This layer of slime makes it difficult for drugs to penetrate to the yeast cells and destroy the Candida.  If you have seen no results from prescription drugs, you may very well have a strong biofilm formed in your body which makes it very difficult to see success.  Fortunately, many natural compounds found in herbs and essential oils can obliterate Candida biofilm.

Goldenseal has also been shown to work very well when used concurrently with fluconazole.  A study that demonstrated this was published in Antimicrobial Agents and Chemotherapy [50.3 (2006): 1096-1099].  In this study, Forty clinical isolates of fluconazole-resistant C. albicans were used to determine the efficacy of berberine and how it would work in tandem with fluconazole.  The study found that using fluconazole and berberine together resulted in much greater inhibition of Candida albicans development.  The study showed that there is indeed a synergistic Candicidal action created when berberine and fluconazole are used together.  The researchers in the study stated the following:

Aside from containing berberine, goldenseal also contains the chemical hydrastine.  According to Dr. James Duke’s phytochemical database, goldenseal contains approximately 15,000 - 40,000 ppm of hydrastine.  The average amount, 27,500 ppm, equates to about 27 mg / mL of goldenseal.  You may well get more hydrastine then this since this is merely an approximation of the average level present in this herb.

Hydrastine is present in goldenseal almost as much as berberine is, and it is a proven inhibitor of Candida albicans.  The study that reports such findings was published in the German journal Zeitschrift für Naturforschung C [62.1-2 (2007): 19-26].  The study found that both berberine and hydrastine inhibited Candida albicans at a concentration of 4 mcg / mL.  There is, of course, about 27,000 mcg in each milliliter of goldenseal; more than enough to deal with a yeast infection.

Side Effects of Goldenseal for Yeast Infections

In general, goldenseal is considered very safe for short term use by adults at reasonable dosages.  However, rare side effects of using this herb include vomiting and nausea.  Goldenseal, as mentioned, does contain berberine.  Berberine could possibly react with some medications.  The following medications may be effected by taking goldenseal: 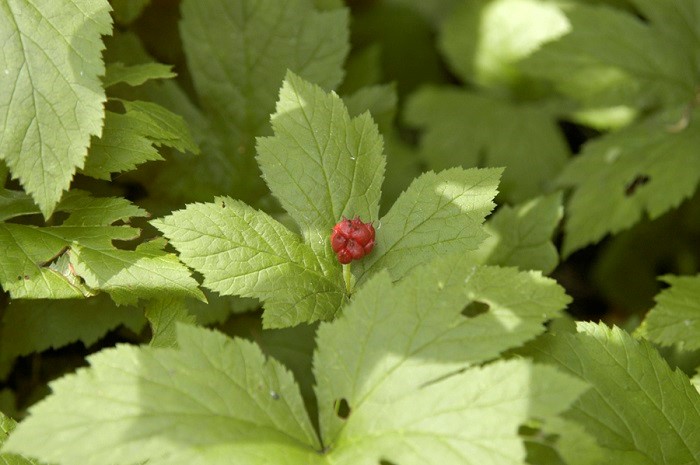