Cinnamon essential oil is a great oil to cook with and is also a potent killer of Candida albicans--the fungus responsible for most vaginal yeast infections.  Cinnamon oil is a proven natural remedy for yeast infections and should be an oil you use.  Cinnamon oil is easy to procure and makes a great natural cure to keep on hand for other reasons besides vaginitis.  If you can, take some time to learn more about this powerful medicinal tool provided by nature.

Cinnamon essential oil and cinnamon bark are both capable yeast infection treatments.  As you will see to some degree in this article, there is a lot of research to support the fact that cinnamon can cure a yeast infection.  Remember, some of the best ways to use essential oils is mixing several that are competent as a remedy for your ailment.  This can possibly create a synergistic healing effect that can help you recover faster.

There is a growing need for efficacious alternative yeast infection treatments due to the advent of synthetic drug resistant yeasts.  Some types of Candida have become resistant to azole antifungal drugs (fluconazole, miconazole, itraconazole).  This can be critical for an immunocompromised individual--such as a person who suffers from HIV.

Given this need, one study was conducted on fluconazole resistant strains of Candida species.

The best way to get an effective amount of eugenol and cinnamaldehyde is to use both cinnamon bark oil and cinnamon leaf oil together.  This mixing of antifungal essential oils will likely have a powerful synergistic healing effect.  You can always use cinnamon bark powder if you don’t have any essential cinnamon oil on hand as well.  Cinnamon bark has been shown to have a competent ability to inhibit Candida.  As the research demonstrates, both types of cinnamon oil are capable treatments for yeast infections.  They are certainly something to add to any Candida killing treatment!

How to Take Cinnamon Bark Oil

You may apply cinnamon bark oil directly to the area of the body you need to.  You may wish to use a carrier oil to dilute the cinnamon oil as the high phenol content can possibly irritate the skin.

Cinnamon bark oil is generally regarded as safe for human consumption by the U.S. FDA.  You can dilute 1 drop of oil in 2 teaspoons of honey or in 8 ounces of a liquid.  You may need to further dilute the oil as it has a tendency to irritate mucous membranes.  Do not use with children 6 years old and younger!

Use of this oil may cause skin irritation. The repetitious use of this essential oil can cause contact sensitization.  Do not use this oil if you are pregnant.  If you are using a diffuser with the oil, it may cause nasal irritation; it may burn if you directly inhale the pure vapor from the nebulizer of the diffuser.

Other uses for Cinnamon Essential Oil

Studies have shown that cinnamon oil may be even more effective at repelling mosquitoes than the synthetic chemical DEET.  Cinnamon oil can even help stop common household pests such as flies, roaches, and black ants.

Cinnamon oil can inhibit the growth of a variety of fungi.  Since it smells wonderful, you can add some oil to your cleaning solutions to give your house a pleasant smell while stopping fungus.  Also, you can add this oil to water and soak your feet in it or apply it to your skin directly to combat fungal infections.

Cinnamon oil will kill bacteria and keep head lice away.  Its pleasant smell makes it a great addition to your shampoo.  This can help keep kids lice free naturally.

For more information on Therapeutic Aromatherapy follow this link. 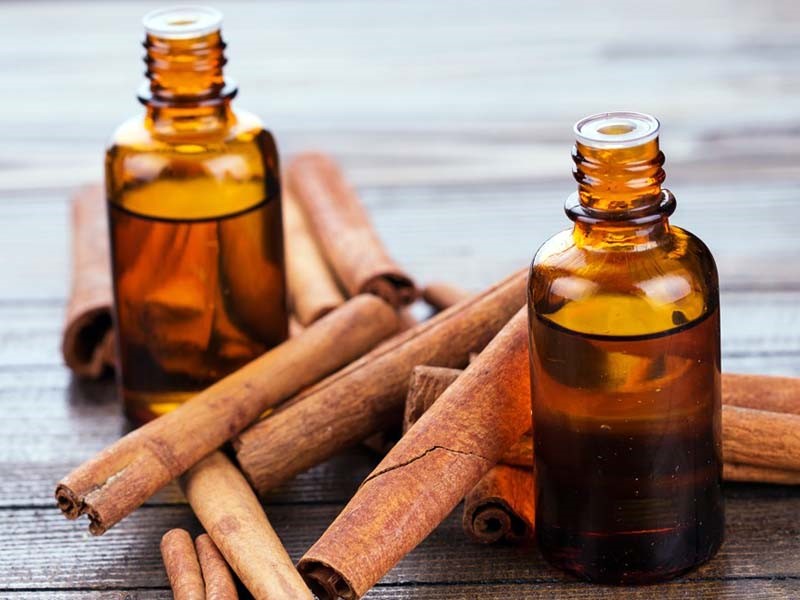