Chamomile has around 9 different Candida fighting chemicals in it, making it powerful against yeast infections.  In addition to stopping Candida, chamomile can be used to treat certain bacterial and viral infections.  This herb is certainly one to have on hand for a variety of medicinal uses.  There are different species of chamomile, so make sure you’re using Matricaria chamomilla (common names: annual chamomile, german chamomile, wild chamomile) and not Chamaemelum nobile (common names: garden chamomile, perennial chamomile, Roman chamomile) as the former is perhaps a better treatment for yeast infection than the latter.

Chamomile (Matricaria recutita / Matricaria chamomilla) is a great choice for an herbal yeast infection remedy.  This plant has several antifungal compounds present in it that deliver a powerful blow to Candida (Candida is the yeast that causes yeast infections).  Using chamomile medicinally is not a new idea; this herb has been used by physicians for thousands of years.  The ancient Egyptians, Romans, and Greeks all used chamomile to treat a wide variety of health maladies.  You can also use this helpful herb quickly and easily to get rid of a yeast infection fast!  One caveat to remember is that this herb’s scientific name Matricaria recutita also has the alias Matricaria chamomilla; hence, these two names indicate the same herb--German Chamomile.

Murti, Krishna, et al. state that chamomile has a wide variety of medicinal uses.  Apparently, a number of the chemical constituents of this herb are excellent at stopping various bacteria, fungi, and viruses.  The authors state the following about the antimicrobial efficacy of chamomile:

The antibacterial and antiviral effects of chamomile have been well documented (Aggag and Yousef, 1972).  An ethanolic extract of German chamomile inhibited the growth of Herpes and Polio Virus (Suganda et al.,1983).  Compounds in the essential oil of chamomile were effective against Staphylococcus and Candida.  Chamomile's essential oil components, α-bisabolol had the strongest activity against Gram-positive and Gram-negative bacteria.  Chamazulene also had strong antimicrobial activity.

The Right Kind of Chamomile for Candida

Another species of chamomile, Chamaemelum nobile, is also known as chamomile.  This species is probably not as good as Matricaria recutita for treating a yeast infection.  There may be more carbohydrates in Chamaemelum nobile; making it less desirable for use against Candida yeast. This plant is also in the Asteraceae family and the common names for it include the following:

How to Use Chamomile for Yeast Infections

A great way to use chamomile for yeast infections is to make a tea with the dried herb.  Simply take a few scoops of dried chamomile and boil it in a few cups of water.  Strain the herb out if you didn’t use a tea bag, and you’ve made chamomile tea!

Once the tea is made, you can drink it several times a day to help allay intestinal yeast infections.  Also, take some chamomile tea and use it topically in the vagina by applying it with a cotton ball or clean cloth.  You can also use the tea as a douche to target vaginal yeast infections.  Try adding a few drops of other plant essential oils that also kill Candida to improve the power of your remedy.  You can place some of the dried herb in a sitz bath as well!  For products containing chamomile, just follow the directions on the package.

If you have a few bags of chamomile that are typically used for making a tea, you can also soak them in a little water and insert them into the vagina.  Try using a chamomile tea bag as a vaginal suppository overnight to combat yeast infections.  If you have some dried chamomile, you can add it to honey and use the mixture intravaginally.

Research on Antifungal Properties of Chamomile

The first study we will examine was published in Revista Brasileira de Otorrinolaringologia [74.1 (2008): 118-124].  The journal’s study was conducted with a few different herbs and evaluated the essential oil of these herbs on various microorganisms.  Of these microorganisms studied, Candida albicans and Candida krusei were among the fungal pathogens examined.  The study found that Matricaria chamomilla exhibited a strong inhibitory action against both Candida species.  A concentration of 4% essential chamomile oil was enough to inhibit Candida albicans and Candida krusei.

Another study of how efficacious chamomile extracts are at hindering the development microorganisms was published in Industrial Crops and Products [44 (2013): 437-445].  The study looked at both bacteria and fungi; of these fungi, one was Aspergillus flavus and the other was Candida albicans.  The study used various chemical solvents to extract the phytochemicals in chamomile; in total 4 different solvents were used.  Once the extracts were created, they were tested on the organisms.  Chamomile in all the different solvents inhibited all the bacteria and fungus it was tested on.  The study found that just a few micrograms of each chamomile extract successfully inhibited Candida albicans.  Consequently, using this herbal remedy is proven to be a good choice.

The study relating to galacturonic acid was published in Planta Medica [67.5 (2001): 428-431].  In the study, many mice were injected with lethal doses of Candida albicans.  The mice were examined for survival.  One group of mice was given chemicals from an herb and studied to see if any positive effects on survival would result.  The study found that a fraction of this herb, containing about 80% galacturonic acid, aided the survival of the mice infected with Candida.  To achieve these results, mice were given 17.5 mg per kilogram of body weight daily of this fraction.  Since this fraction contained mostly galacturonic acid, it is likely to assume this acid played an important role in aiding mice survival.  This suggests that taking galacturonic acid, which is naturally present in Matricaria recutita flowers, may also help the body of humans deal with Candida yeast.

Chamomile belongs to the Asteraceae family; commonly referred to as the compositae, aster, daisy, or composite family.  Consequently, it can share some commonalities with other plants in this family like ragweed, marigold, daisy, and chrysanthemum.  If you have had a history of allergic reactions to ragweed or other plant in this family, you may also have an allergic response to chamomile as well.  This is the most probable side effect that can occur when taking chamomile.

Allergic reactions include skin rashes, shortness of breath, throat swelling, and even anaphylaxis.  This occurs when people who are allergic come into contact with chamomile or ingest it.  If you are concerned you may be allergic to chamomile, you can do a quick test to see how your body reacts.  Simply make a strong tea or decoction of chamomile and place a little bit on a patch of skin.  If your skin develops a rash, you should discontinue use.  If you do not see any adverse effects, you can try drinking a little of the tea; then, watch to see if you notice any allergic reactions.

If you have a history of severe allergic reactions to these types of plants, it would be prudent to consult a physician about your plan to use this medicinal herb.  Also, you can avoid taking chamomile tea or any other preparation intended for ingestion.  Limit your use of chamomile to topical treatments and you are going to be less at risk for systemic side effects due to allergic reaction. 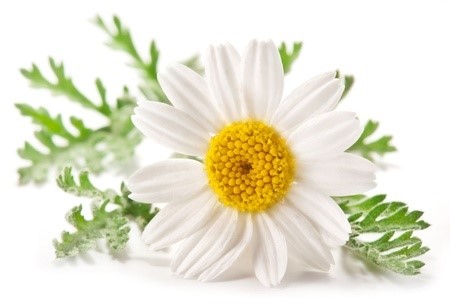