Health benefits of brown rice include better functioning of cardiovascular system, digestive system, brain, and nervous system. It is loaded with powerful antioxidants which provide relief from a range of ailments such as hypertension, unhealthy levels of cholesterol, stress, mental depression, and skin disorders. High nutritional content in brown rice proves effective in various medical conditions such as cancer, obesity, diabetes, neurodegenerative disorders, and insomnia. It has anti-depressant properties and helps maintain healthy bones and stronger immune system.

Brown rice is an unrefined and unpolished whole grain which is produced by just removing the surrounding hull of the rice kernel. Its grain retains its nutrient-dense bran and germ layer. It is chewier as compared to white rice and has a nutty flavour.

Most of us are aware about the fact that brown rice is better than white rice. The reason that makes the it stand out is the super quality and quantity of nutrients which the brown rice offers. Unlike white rice, it does not go through the process of milling and polishing and hence retains its immense treasure of healthful components. The process of milling that converts brown rice into white rice strips away most of its nutritional value. There are many varieties of brown rice available in the market with their unique flavour, aromatic components and varied concentration of fatty acids.

Brown rice is a natural wholesome food rich in essential minerals such as manganese, iron, zinc, phosphorous, calcium, selenium, magnesium and potassium. Vitamin wealth includes vitamin B1 (thiamine), vitamin B2 (riboflavin), vitamin B3 (niacin), vitamin B6, folate, vitamin E (alpha-tocopherol) and vitamin K. It is a source of protein and adds good amount of fibre content to our diet. Along with this, it is also a provider of health-supportive vital fatty acids.

Introduction of brown rice in the diet brings tremendous health gains and benefits discussed as under:

Brown rice is beneficial for diabetic and hyperglycaemic individuals. It has a low glycaemic index which is helpful in reducing insulin surges and assists in the stabilization of blood sugar levels in the body. A comparative study conducted in this regard has revealed that it is rich in phytic acid, fibre, and essential polyphenols. It is a complex carbohydrate which helps in slower release of sugars as compared to white rice. American diabetes association also recommends choosing nutrient-dense brown rice over white rice for diabetics to accomplish the need of essential vitamins, fibre and minerals in their diet.

Brown rice is rich in powerful antioxidants which extend their protection against the damage caused by oxygen free radicals. It contains an important antioxidant enzyme called superoxide dismutase which protects the cells from oxidation damage during energy production. A comparative study involving white and brown rice has suggested that brown rice exhibits superior radical scavenging activity and aids in the prevention of various oxidation-mediated diseases such as coronary heart diseases.

Brown rice is instrumental in seeking weight control for the people combating with obesity. It contains manganese which helps to synthesize the body fats. A research study conducted in this regard has revealed that consumption of whole grains such as brown rice has positive effects on the body with respect to reduction in body mass index and body fat. It also enhances the activity of glutathione peroxidase, an antioxidant enzyme and helps elevate the levels of HDL cholesterol in the obese individuals. Another comparative research has also advocated the anti-obesity effects of germinated brown rice.

Germinated brown rice helps in the prevention of neurodegenerative complications such as Alzheimer’s disease attributing to the abundance of gama-aminobutyric acid. Sprouted brown rice contains healthful components which helps in the inhibition of harmful enzyme called protylendopetidase which is associated with Alzheimer’s disease. It is also beneficial for other cerebral-related disorders such as dementia and amnesia.

Sprouted brown rice is beneficial for the mental health of the lactating mothers.  An investigative study has shown positive results in the nursing women with respect to reduction in mood disturbances, stages of depression and fatigue.  It has also suggested that consumption of brown rice during lactation enhances body’s ability to resist stress and improves overall immune defense.

Brown rice is healthful staple which can be added to the daily diet for keeping a healthy digestive system. Fibre present in helps regulate the bowel function and keeps a fuller feeling. A comparative study investigating the effects of white rice and brown rice during gastric digestion has made it qualitatively evident that the bran layer on brown rice prevents the absorption of acid and humidity resulting in better texture retention. Fibre content also brings relief from other troubling conditions such as constipation and colitis.

Brown rice is rich in selenium which is beneficial for a healthy heart. Consumption of whole grains such as brown rice helps reduce the blockage of arteries due to plaque build-up. This protective action is contributory in the reducing the risk of cardiac disorders such as high hypertension and vascular diseases. Studies conducted in this regard have suggested that the tissue surrounding the grain of brown rice contains a healthful component which acts against the endocrine protein angiotensin II, implicated in the development of high blood pressure and atherosclerosis or hardening of arteries.

Brown rice is a healthy option for maintaining healthy levels of cholesterol attributing to the presence of naturally occurring oils. An investigative study has revealed that it possesses hypocholesterolemic qualities and regulates cholesterol catabolism. It contains beneficial nutrients that help in lipid and glucose metabolism. Another study conducted has revealed that consumption of brown rice has shown significant improvement in the serum and HDL cholesterol concentrations in the subjects with chronic ethanol abuse. It has also suggested germinated brown rice extract helps in preventing the rise in the liver triglycerides due to excessive alcohol intake attributing to the presence of gamma-aminobutyric acid.

Brown rice is helpful in the prevention of various cancers such as colon cancer, breast cancer and leukaemia. This beneficial effect can be attributed to the presence of potent antioxidants and high fibre content in it. The fibre content present in brown rice has the ability to bind itself to the harmful cancer causing toxins in the body. This prevents the toxins from attaching to the walls of the colon and helps eliminate them from the body. An investigative study evaluating the chemopreventive properties of brown rice has validated that its bran contains essential phenols such as tricin, ferulic acid, caffeic acid which is present at much lower levels in white rice. These phenolic components are valuable in the inhibiting the proliferation of colon and breast cancer cells. Another study has revealed the stimulatory effect of germinated brown rice on the induction of apoptosis and its inhibitory effects on the production of leukaemia cancer cells. Furthermore, researches have validated the antitumor effects of dietary brown rice brans.

Brown rice is beneficial for the smooth functioning of the brain and nervous system. It helps in accelerating the metabolism in the brain attributing to the presence of vitamin B and essential minerals such as manganese. Magnesium present in it balances the activity of calcium in the body and helps in the regulation of nerves and muscle tone. It prevents the sudden surge of calcium into the nerve cells and activation of nerve. This aid in keeping the nerves and muscles relaxed and prevent excessive contraction. Vitamin E present in it also plays a vital role in preventing various brain diseases caused due oxidative damage.

Germinated brown rice possesses anti-depressant qualities and helps in combating anxiety related disorders. An investigative study has suggested that germinated brown rice contains essential amino acids such as glutamine, glycerin, and GABA. These inhibitory neurotransmitters facilitate reduction in the allowance of messages associated with anxiety, depression and stress in the brain resulting in a relaxed state of well-being.

Brown rice helpful in the treatment of insomnia. It is a natural source of sleep hormone melatonin. It enhances the quality of sleep by relaxing the nerves and increasing the sleep cycle.

Brown rice is loaded with significant quantities of vitamins, minerals and essential phenolic components which help boost the immune system of the body. It nourishes the body, accelerates healing, and enhances its ability to fight infections.

Brown rice is helpful in the maintenance of healthy bones. It is rich in magnesium which along calcium provides the bones their physical structure. Magnesium-rich brown rice prevents bone demineralization and is beneficial for medical conditions such as arthritis and osteoporosis.

Rice is a staple food ingredient not just in Asia but over a wide range of population across the world. Brown rice is available in many forms such as long grains which are perfect for cooking stir fried, salads or pilafs, short grains which has a soft and sticky texture perfect for moulds or puddings. Sweet brown rice can serve deliciously for desserts. Brown rice syrup is considered as a healthful sweetener attributing to the presence of nutrients in the brown rice. It gives a sweet, nutty, buttery flavour to baked goods and hot drinks.

Brown rice contains essential natural oils which has the potential to go stale if stored for too long. It is advisable to check the expiry or ‘use by’ date to ensure freshness. Raw brown rice can be stored for up to six months in an air tight container at room temperature to keep the freshness intact. To extend the shelf life of the raw brown rice, it can be refrigerated. Cooked brown rice should be stored with caution. Incorrect storage of cooked rice triggers the growth of bacteria called Bacillus cereus which can cause food poisoning irrespective of reheating. It should neither be stored at room temperature and nor reheated more than once.

How to cook brown rice?

Brown rice takes longer cooking time and requires more water because of its outer fibre coating. For one cup rice, you may use two and a half to three cups of water. Prior soaking of brown rice cuts down the cooking time. Soaked brown rice would take about 35-40 minutes to cook.

Brown rice is generally hypoallergenic and does not contain any significant amount of disturbing elements such as purines or oxalates.

Brown rice is a super whole grain which is packed with high degree of healthy components. It extends its beneficial effects to most of the organs including healthy heart, digestion, brain, bones, muscles, cholesterol, and blood pressure. Brown rice is also beneficial for treating skin ailments like psoriasis, promotes healthy skin and restores hair loss. It has anti-aging qualities attributing to the presence of ferulic acid, an antioxidant which helps in the prevention of skin-aging. Brown rice is rich in folate which is extremely essential during pregnancy for healthy growth of the foetus. Small portions of brown rice are also recommended for the patients suffering from candida infections attributing to its richness in digestive enzymes which is apt for a weakened digestive system. Brown rice tones up the body and mind and helps combat general weakness and deficits in the body. 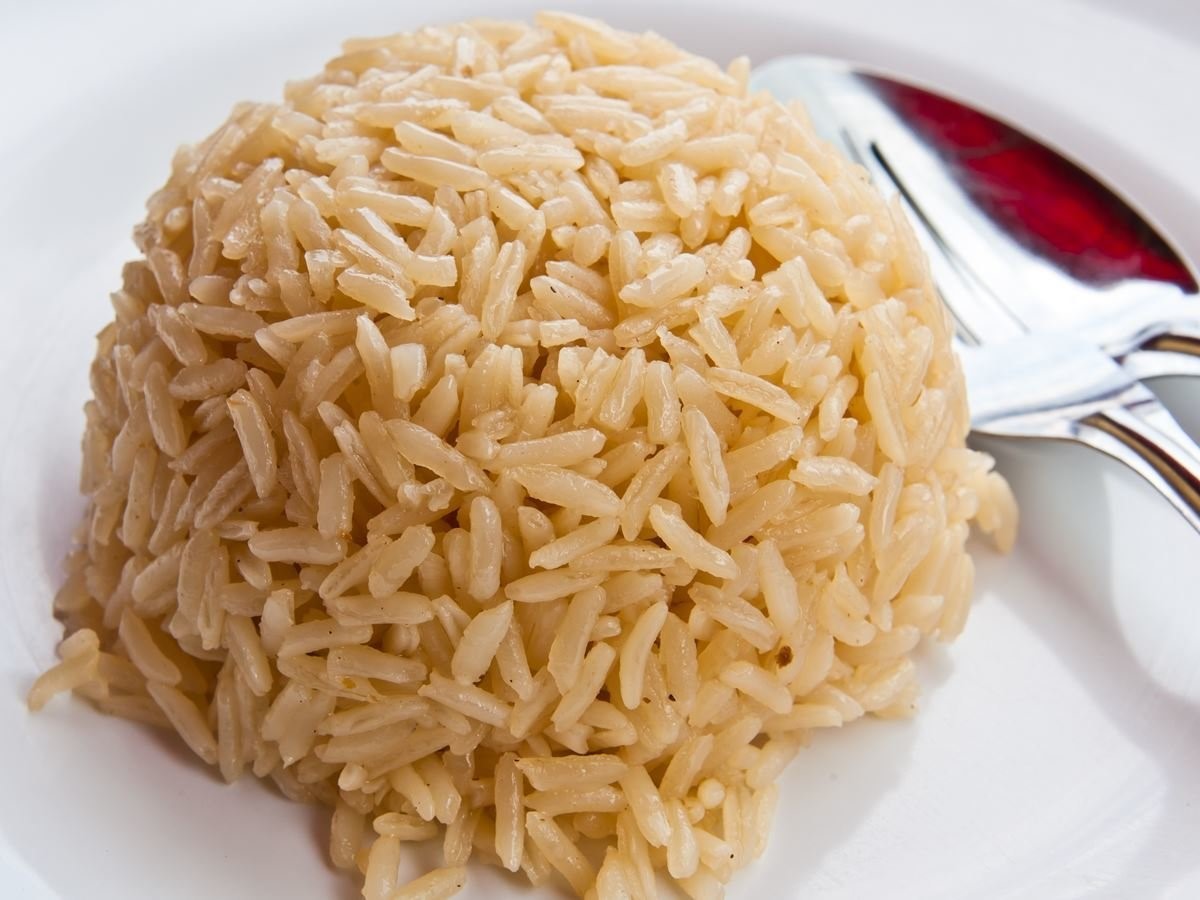 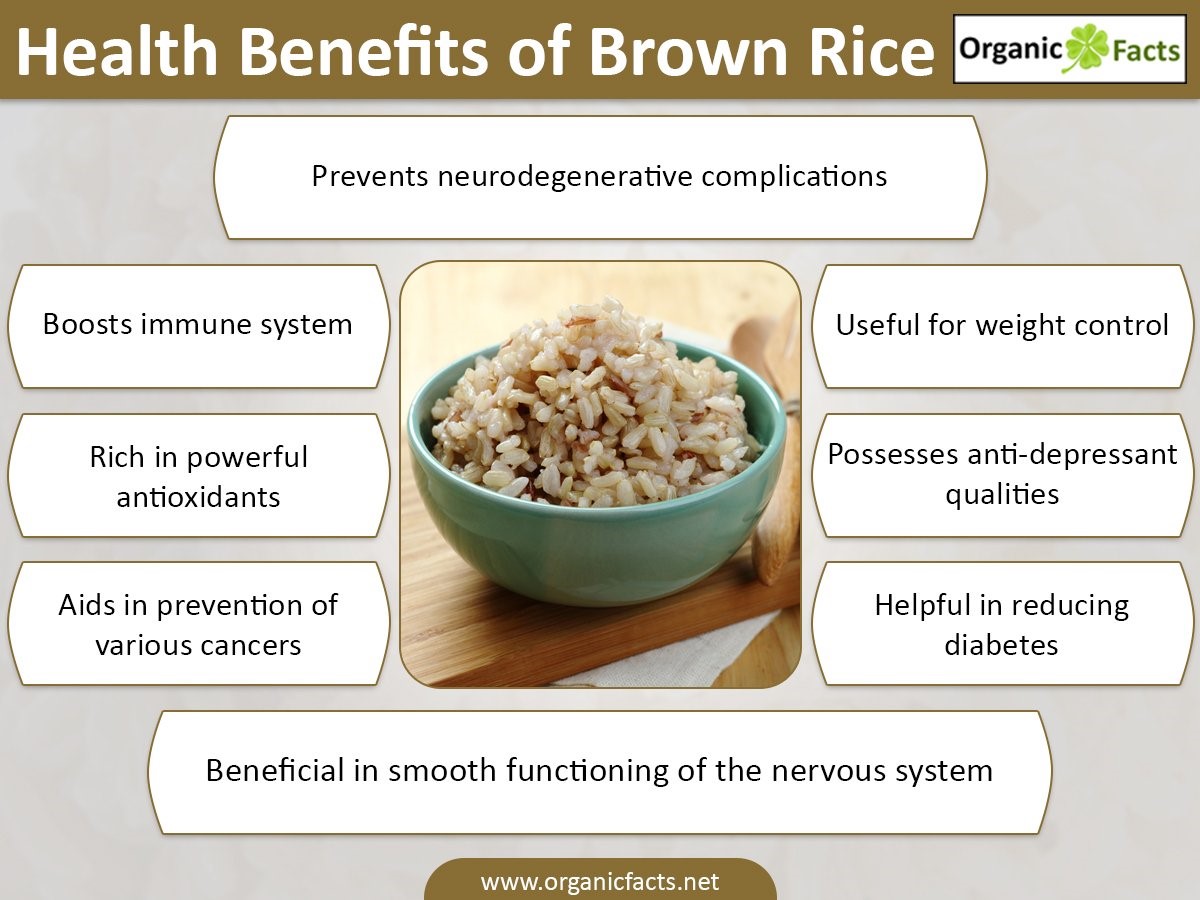