Black pepper is probably the most important and popular spice in the world and has a history of at least 4000 years. Pepper was worth more than gold and the quest for it led to the discovery of the New World, but the history of pepper began long before the Spice Trade. Pepper is native to South East Asia but was used in ancient Egypt as part of the mummification process and was buried alongside Egyptian kings and queens. In ancient Greece, pepper was used as currency and was offered to the Gods in sacred rituals. One of the reasons pepper was valuable is because it could disguise food that didn't taste as fresh as it should have. Pepper is the fruit of the pepper plant, a vine-like plant that belongs to the buttercup family, and it can reach heights of up to four metres. The pepper plant grows for at least three years at which point small flowers form and these develop into berries which are picked when they're green and unripe. They are dried in the sun or by machine and they shrink, harden and darken in colour until they develop the black, wrinkled outer layer characteristic of black peppercorns. If pepper berries are ripe before picking, they will lose most of their spicy flavour.

Peppercorns are known to have disease preventing and health promoting properties and have been used since ancient times for their anti-inflammatory, carminative, anti-flatulent properties. Black pepper has powerful antioxidant and antibacterial effects and helps in metabolising food and settling the stomach. Black peppercorns contain good amounts of minerals like potassium, calcium, zinc, manganese, iron and magnesium. Black pepper improves digestion and promotes intestinal health.  Black pepper aids in weight loss, and treats sinus, asthma, and nasal congestion. It also reduces the risk of cancer, and heart and liver ailments. Let us know the health benefits of black pepper in detail;

Consumption of pepper increases the hydrochloric acid secretion in the stomach, thereby facilitating digestion. Proper digestion is essential to avoid diarrhea, constipation, and colic. Pepper also helps to prevent the formation of intestinal gas, and when added to a person’s diet, it can promote sweating and urination. Sweating removes toxins and cleans out the pores of the foreign bodies that may have lodged there and it can also remove excess water. In terms of urination, you can remove uric acid, urea, excess water, and fat, since 4% of urine is made of fat. A good digestion helps in weight loss, makes your overall body function better, and prevents severe gastrointestinal conditions. As black pepper is carminative in nature, it easily expels the gas out of the body in a downward motion, which is healthy, as upward moving gas can be dangerous because it can strain the upper chest cavity and other vital organs.

The outer layer of peppercorn assists in the breakdown of fat cells. Therefore, peppery foods are a good way to help you shed weight naturally. When fat cells are broken down into their component parts, they are easily processed by the body and applied to other processes and enzymatic reactions, rather than settling in your body and making you look overweight.

Pepper helps to cure vitiligo, which is a skin disease that causes some areas of skin to lose its normal pigmentation and turn white. According to researchers in London, the piperine content of pepper can stimulate the skin to produce melanocytes pigment. Topical treatment of piperine combined with ultraviolet light therapy is much better than other harsher, more chemical-based treatments for vitiligo. It also reduces the chances of skin cancer due to excessive ultraviolet radiation.

In Ayurvedic practices, pepper is added to tonics for treating cold and cough. Pepper also provides relief from sinusitis and nasal congestion. It has an expectorant property that helps to break up the mucus and phlegm depositions in the respiratory tract. Its natural irritant quality helps you expel these loosened materials through the act of sneezing or coughing, which eliminates the material from the body and helps you recover from infection or illness that caused the deposition in the first place.

The antibacterial property of black pepper helps to fight against infections and insect bites. Pepper added to the diet helps to keep your arteries clean by acting in a similar way to fiber and scraping excess cholesterol from the walls, thereby helping to reduce atherosclerosis, the condition highly responsible for heart attack and stroke.

Antioxidants in pepper can prevent or repair the damage caused by the free radicals and thus help to prevent cancer, cardiovascular diseases, and liver problems. Free radicals are the byproducts of cellular metabolism that attack healthy cells and cause their DNA to mutate into cancerous cells. Antioxidants neutralize these harmful compounds and protect your system from many conditions and even premature aging symptoms like wrinkles, age spots, macular degeneration, and memory loss.

Black pepper helps in transporting the benefits of other herbs to different parts of the body, maximizing the efficiency of the other foods we consume. That is why adding it to food not only makes it delicious but also helps to make the nutrients more available and accessible to our system.

Piperine, one of the key components of black pepper, has been shown in numerous studies to reduce memory impairment and cognitive malfunction. Chemical pathways in the brain appear to be stimulated by this organic compound, so early research demonstrates the possibility of pepper to benefit Alzheimer’s patients and those suffering from dementia and other age-related or free radical-related malfunctions in cognition.

A number of studies have shown that black pepper may have beneficial effects on gastric mucosal damage and peptic ulcers, due to its antioxidant and anti-inflammatory properties.

Pepper is a good treatment for respiratory conditions due to its properties as an expectorant, as well as its strong anti-inflammatory properties.

Preparing grounded pepper powder at home is better than buying a ready-made. However, even home-made powder retains its freshness for only 3 months, while whole peppercorns can keep their freshness indefinitely. Thus, adding a pinch of black pepper to every meal helps to improve both, taste and digestion. It also improves your overall health and well-being.

Is Black Pepper Good for you?

Yes, it is. According to Ayurvedic medicine, black pepper helps to prevent ear-aches and gangrene. It is also good for treating conditions like a hernia, hoarseness and insect bites. It is also commonly used to treat tooth decay and toothache. In ancient times, pepper was also administered to treat vision problems.

How to Select and Store Peppercorns?

Black pepper is available around the year in all the stores. It’s better to buy whole pepper seeds, not the powdered black pepper. Look for peppercorns that are compact, round, heavy, and wholesome. Peppercorns can be stored for months in a dry air-tight container at room temperature, in a dry and dark place. And keep the ground black pepper in the refrigerator for a longer shelf life.

Word of Caution: Pepper may cause sneezing. Patients who have undergone abdominal surgery should not add excessive pepper to their diet because it can have an irritating effect on the intestines. Black pepper should not be taken in high concentration, and if you see signs of an allergic reaction, discontinue its use and consult a doctor. 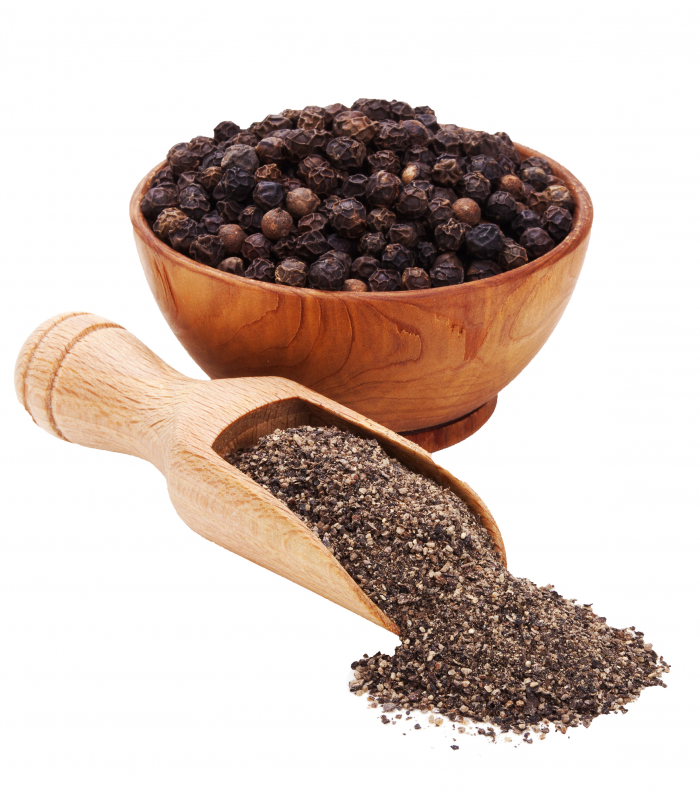 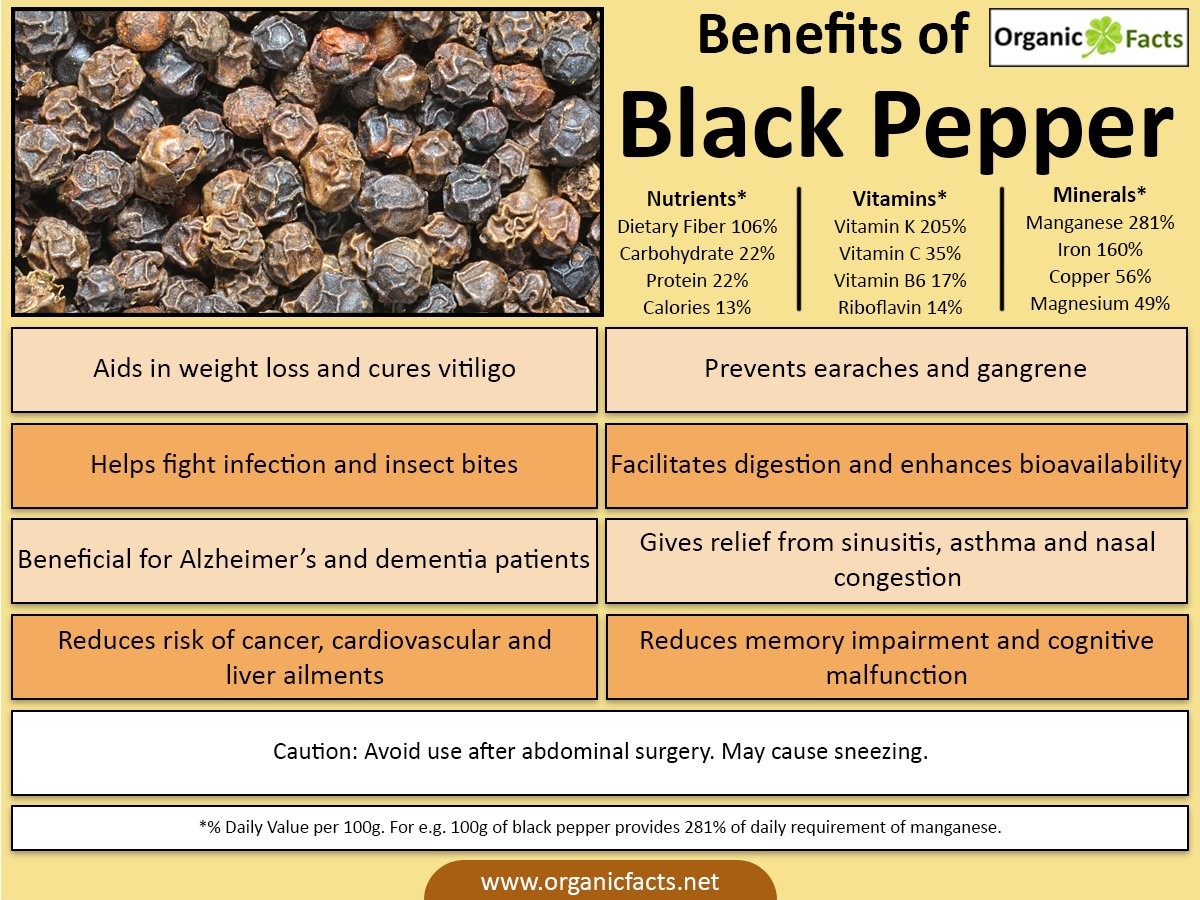