Vitamin B12 benefits the central nervous system in many important ways: It helps maintain the health of nerve cells — including those needed for neurotransmitter signalling — and helps form the protective covering of nerves, called the cell’s myelin sheath. This means that when vitamin B12 levels are low, almost every cognitive function can suffer.

Vitamin B12, sometimes also called cyanocobalamin, also helps with digestion and heart health, so a deficiency can lead to both digestive disorders and an increased risk for heart disease.

The National Institute of Health’s (NIH) Dietary Office estimates that somewhere between 1.5–15 percent of people in the U.S. are deficient in vitamin B12. (2) Other studies, like one done by the American Journal of Clinical Nutrition in 2000, indicate that this number might be even higher, with up to 39 percent of the population possibly suffering from a vitamin B12 deficiency.

Vitamin B12 can be found to some degree in fortified plant foods like nutritional yeast, fortified grain products and algae sea vegetables. However, most of these are not thought to be nearly as absorbable as natural animal sources are.

There are more precise screening options available to detect a deficiency, but these are usually not given to patients unless they have a known case of anaemia or heart disease-related symptoms. (5) So if you suspect you might have a deficiency but your initial blood test shows that your levels are normal, you may want to talk with your doctor about performing secondary tests, especially those that check for high homocysteine levels.

Symptoms of a vitamin B12 deficiency can include:

Who is most at risk for having a vitamin B12 deficiency? Elderly people who tend to have impaired digestion are one of the most susceptible populations. This is because older people tend to produce less stomach acid that is needed to convert vitamin B12 properly.

Since animal foods are usually the best sources of vitamin B12, those who follow a vegan diet and don’t eat any animal products are also most likely to have a deficiency. Therefore, both older adults and plant-based eaters are advised to take a daily vitamin B12 supplement. (7)

Other groups that are at a higher risk of having a vitamin B12 deficiency include smokers (since nicotine can block absorption), alcoholics, those with anaemia, and anyone with a digestive disorder like celiac or Crohn’s disease.

Recommended Daily Amount of Vitamin B12

According to the NIH, the Recommended Dietary Allowance (RDA) for vitamin B12 is: (8)

Compared to other vitamins, we don’t need a very large amount of vitamin B12 — but we do need to replenish our supply.

The NIH recommends that adults over 50 years take a daily vitamin B12 supplement, or that they consume foods fortified with vitamin B12. The recommendation is to take between 25–100 milligrams per day, as this amount has been shown to maintain healthy levels of vitamin B12 levels in older people.

Vitamin B12 can be taken in tablet form, in drops that you place under on the tongue or in oral spray form. Sometimes seniors do better with drops and oral spray forms of vitamin B12 because they have trouble absorbing the vitamin from the stomach.

Because vitamin B12 is a water-soluble vitamin, the body has the ability to flush out (through our urine) any excess that it doesn’t need. As a result, vitamin B12 is considered safe and non-toxic, although it’s still always best to stick to the recommended amount and not take large doses of any supplement without consulting with a doctor first.

Take a look at the chart alongside to see these benefits:  Top 9 Vitamin B12 Benefits - Table 1 - page 1 and 2

In contrast, one study compared vegans who supplemented with vitamin B12 (an average of 5.6 mcg/day) and their homocysteine levels were well within the healthy range.

If you have been a typical meat eater for most of your life, your body should have stored enough B12 to prevent overt deficiency for a number of years.   However, B12 stores cannot be relied on to keep homocysteine levels in check for very long.

Please discuss with your DBM Physician which supplement you should be taking, if any at all. 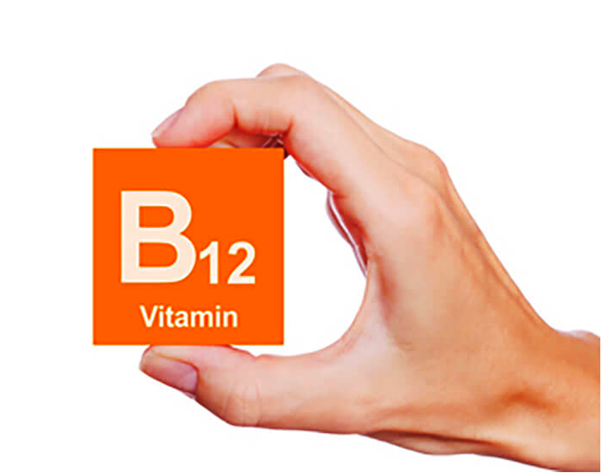 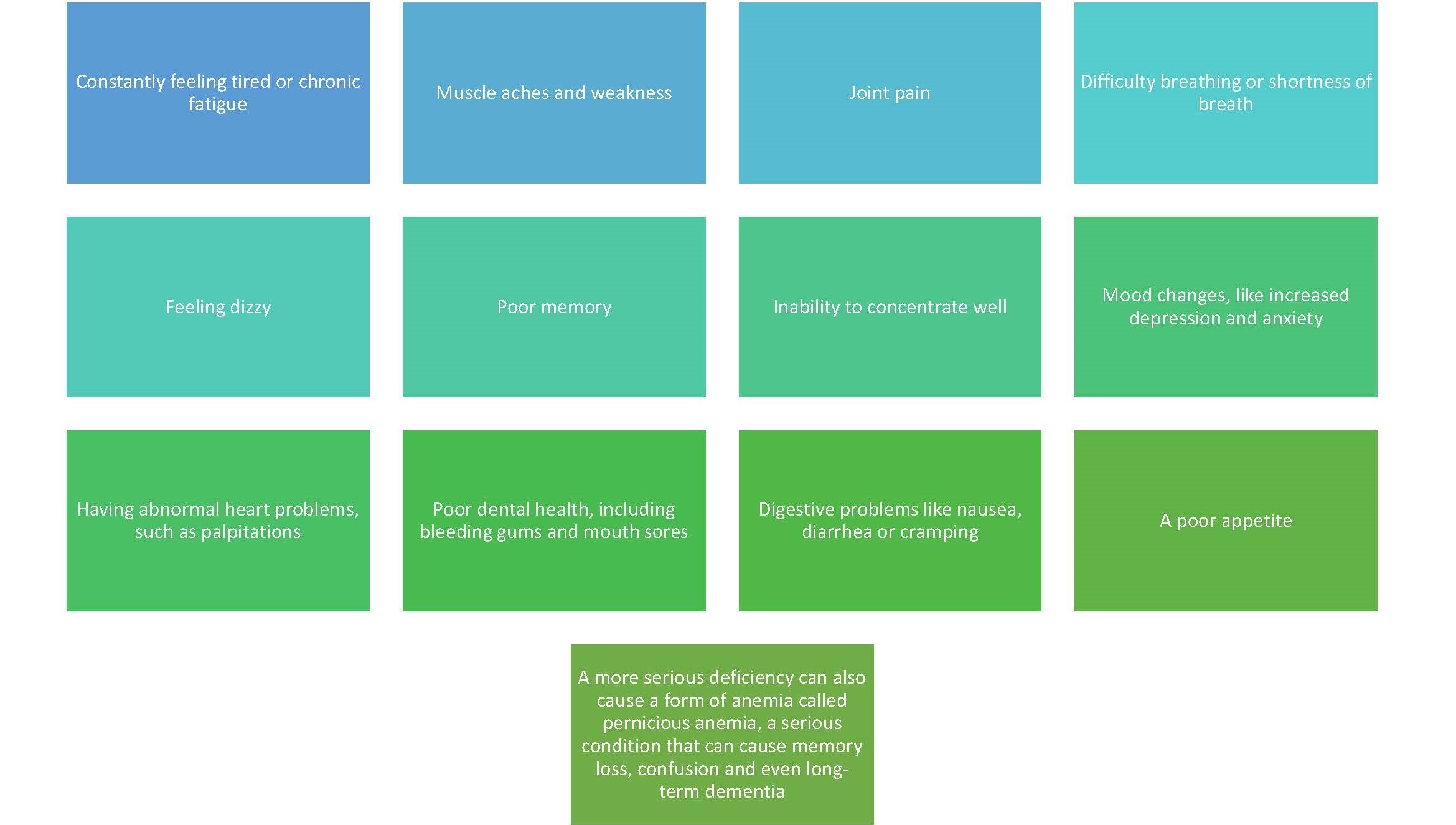 Symptoms of a vitamin B12 deficiency

Recommended Daily Amount of Vitamin B12 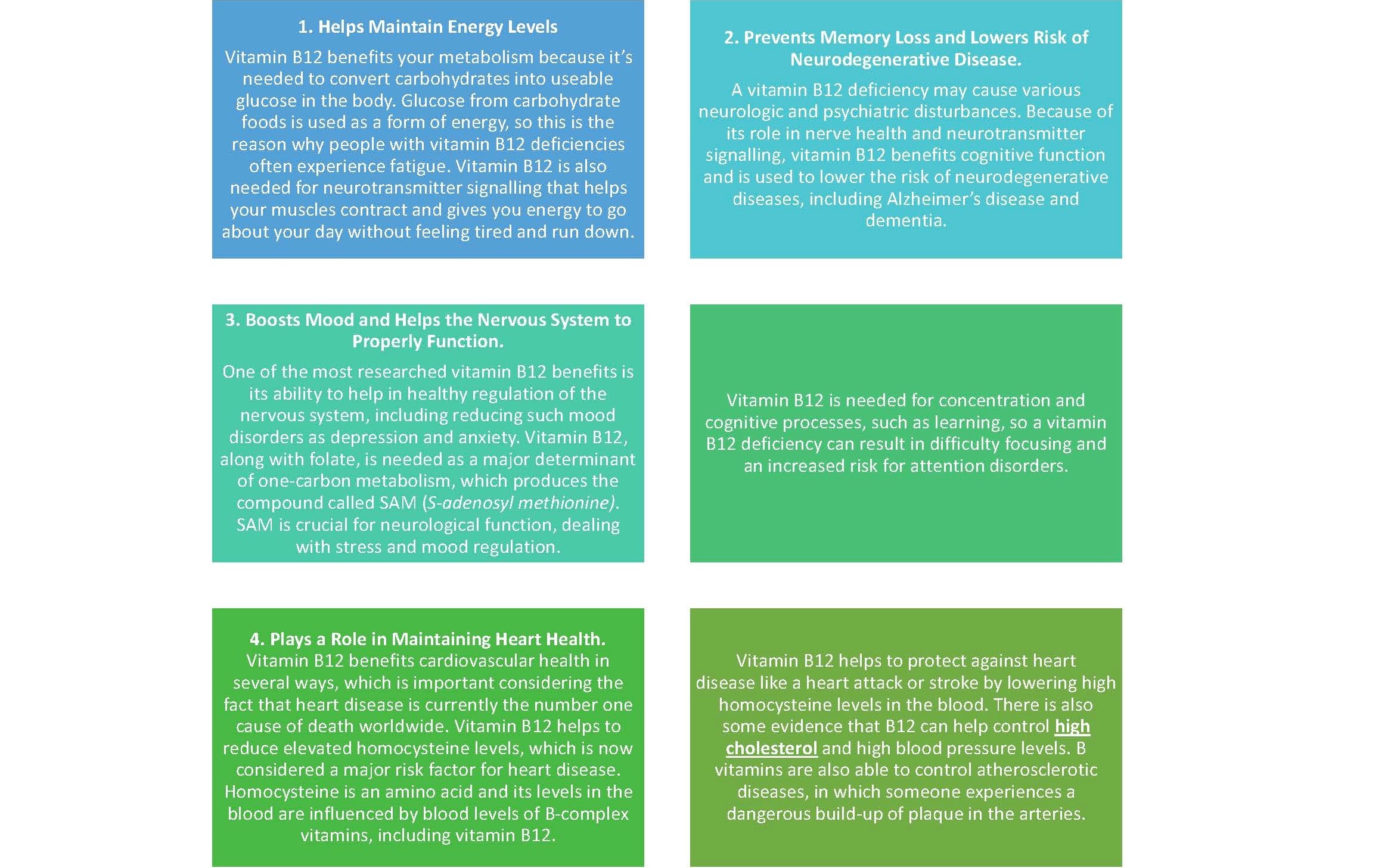 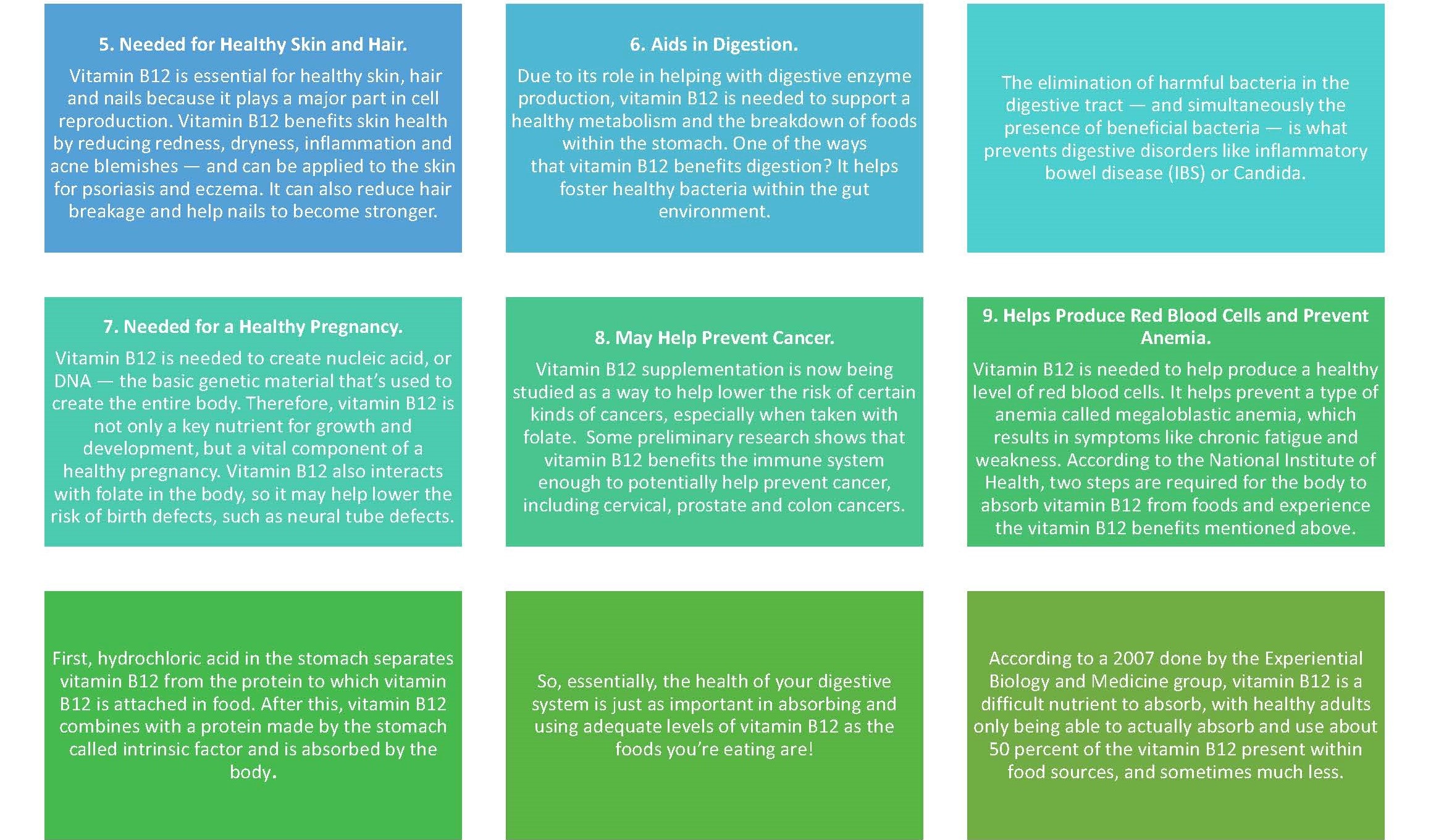