Some of the most important health benefits of amaranth grain include its ability to spur growth and development, protect your heart, boost the immune system, strengthen your bones, increase circulation, optimize digestion, lowers appetite, and keeps hair looking young.

Despite being one of the most ancient forms of cultivated food, amaranth grain remains extremely important for human health, just as it did for the Aztecs and other indigenous cultures up to 8,000 years ago. You will most commonly find amaranth grain sold in health food shops, as it is still not a widely cultivated type of grain, but the demand for this nutrient-packed grain is growing. The most commonly cultivated species are Amaranthus caudatus and Amaranthus cruentus, and are used in North America, Mexico, Central America, and certain parts of India. The largest cultivator of amaranth grain is the United States, but it is still widely used and grown in parts of Mexico. Amaranth leaves are also valuable, although far less popular than the grains themselves.

Amaranth shouldn’t be eaten raw, as it does contain certain toxic or undesirable components that can be eliminated by boiling and proper preparation, such as oxalates and nitrates. However, there are also valuable antioxidant and phenolic compounds, as well as fibre, vitamins, and minerals that can have significant effects on human health. If it has been in use for thousands of years, there must be a good reason for it.

The grains can be made into amaranth flour as a substitute for traditional flour sources, and provides a much richer variety of nutrients, proteins, amino acids, vitamins, and minerals than other grains. While the distribution of amaranth grain is still relatively limited, given that it only returned to cultivation in the 1970s, the increasing global demand for complete protein sources and nutrient-dense staple foods that are hardy and easy to grow have made amaranth grain one of the most potentially important food sources in the coming decades. Now, let’s take a more in-depth look at the many health benefits of amaranth grain.

One of the most desirable elements of amaranth grain is the fact that it features lysine in much larger quantities than other grains (some grains have none). Lysine is an essential amino protein for the human body, which makes amaranth a “complete protein”. This is very desirable for human health, as it delivers all the essential amino acids to create usable proteins within the body, thereby optimizing the metabolism and ensuring proper growth and development. Therefore, for indigenous cultures and those with limited access to diverse food sources, amaranth grain represents a vital component of their diet.

The phytosterols found in amaranth grain have been connected to lowering cholesterol levels, while the significant levels of dietary fibre also help to balance the cholesterol levels in your cardiovascular system, thereby lowering your chances of developing atherosclerosis and subsequently suffering from heart attacks or strokes. The rich potassium levels found in amaranth grain further boost heart health by relaxing the blood vessels. Potassium is a vasodilator, which means that it reduces strain and tension in the arteries and blood vessels, lowering blood pressure and reducing the chances of coronary heart disease.

As mentioned above, amaranth grain contains a high level of dietary fibre, which can help to optimize the digestive system and eliminate constipation, bloating, cramping, and more serious conditions, like colon cancer and gastric ulcers. Dietary fibre also helps to increase nutrient uptake efficiency, and with the high concentration of nutrients in the grain, this is a very important side effect of that dietary fibre.

Not only is amaranth grain a complete protein, it also has much higher levels that other grains, even oats, which are commonly considered the best place to find plant-based protein. Plant proteins are easier for our bodies to digest and utilize than animal proteins, so shifting your overall protein balance to those derived from sources like amaranth grain makes your body run smoother and more efficiently in every way!

The unique chemical makeup up amaranth grain has some rather unexpected benefits as well, including being a wonderful way to flatten wiry hair and increase lustre and quality. Lysine is a critical amino acid that our body is unable to produce, so we must get it from our diets. Amaranth has higher levels of lysine than other grains, which makes it very important for hair health. Lysine has been linked to stronger, healthier hair, better roots, and a reduction in hair loss. You can reduce greying and hair loss by adding amaranth grains to your diet, although the exact pathway that benefit comes from is somewhat unclear.

Boasting more than twice the calcium content of milk, amaranth grain can be a major factor in your bone health and bone mineral density. As calcium is an essential part of our bones, you can help to prevent or slow the onset of osteoporosis by adding this calcium-rich grain into your regular diet.

Like some other grains and grasses, amaranth grain is gluten-free, which is good news for those who suffer from Celiac disease. This disease prevalence has increased dramatically in recent years, partly explained by improved detection and testing techniques, but also due to a general change in our species’ dietary tolerances due to a wide range of environmental and dietary factors. In the coming years, the number of those suffering from Celiac disease (gluten intolerance) is expected to increase, making gluten-free grains like amaranth increasingly important.

Amaranth is rare for grains, in the sense that it has vitamin C, and this gives it an immune system-boosting edge over its dietary competitors. With high levels of vitamin C, amaranth grain can help boost your overall immune system, as vitamin C stimulates white blood cell production, and can also contribute to faster healing and repair of cells, due to its functional role in the production of collagen.

Amaranth grain can effectively lower insulin levels in the body, and simultaneously releases a hormone in the body that effectively tells our body that we’re full. This is the opposite of the “hunger” hormone, which often causes people to snack between meals and gain weight. For those interested in losing weight in addition to gaining countless healthy side effects, switching to amaranth grain might be your best bet!

As mentioned above, amaranth grain has the ability to lower insulin levels and control blood sugar intake through appetite control/suppression. This is an ideal situation for those at risk for diabetes, as elevated insulin levels and obesity are two of the causes or “red flags” for diabetes. Given the global pandemic nature of diabetes at present, anything able to lower those insulin levels is considered vitally important.

Acquiring protein in our diet is one of the most reliable ways to keep our bodies toned, developed, and functioning properly. The unusually high levels of plant proteins in amaranth make it an ideal addition to your diet if you want to ensure the healthy growth of cells, muscles, tissues, and skin.

The vitamin A found in amaranth has a major effect on the health of our ocular system. Beta-carotene is an antioxidant that prevents the development of cataracts and can slow the onset of macular degeneration.

Amaranth grain has no known toxicities or dangers as a dietary supplement, but due to its ability to lower insulin levels, for those who are hypoglycaemic, this could be potentially dangerous, so care must be taken in that instance. 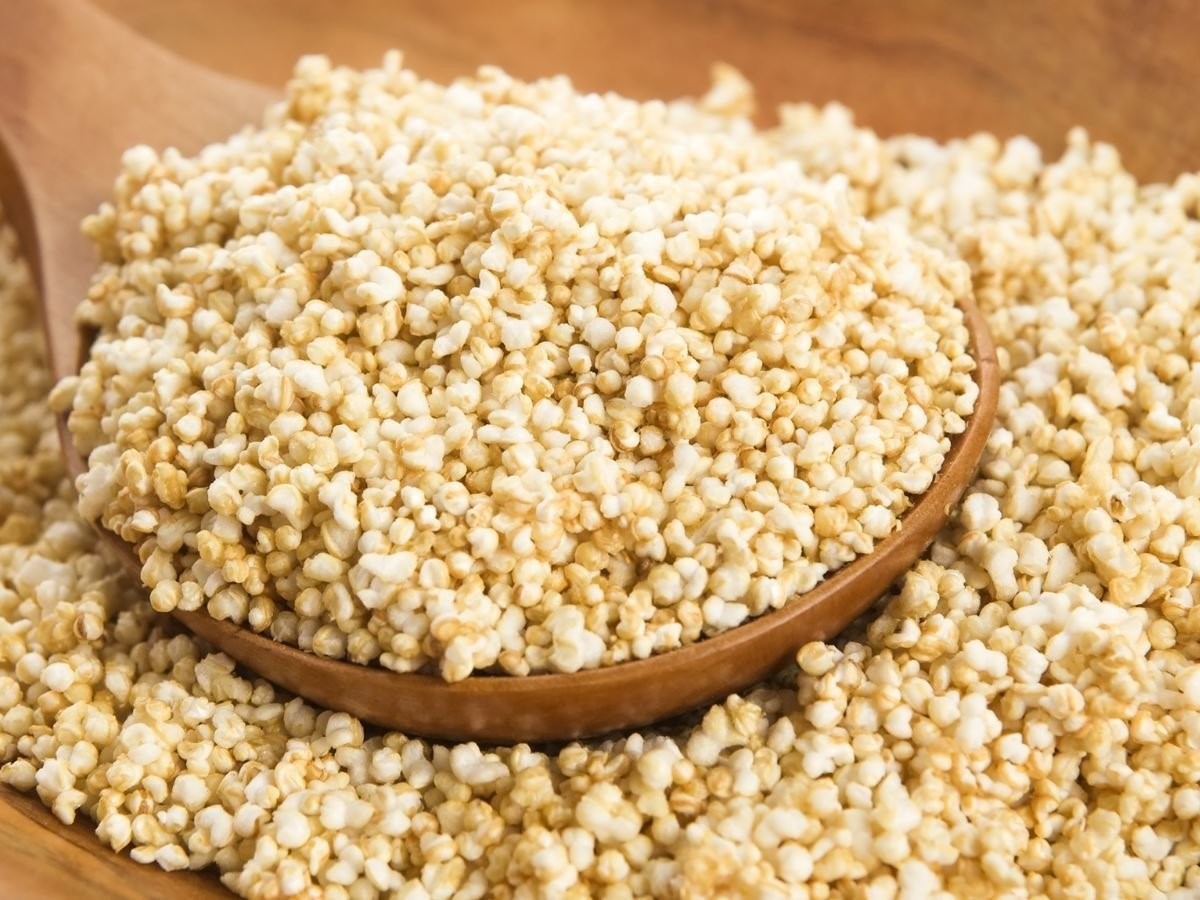 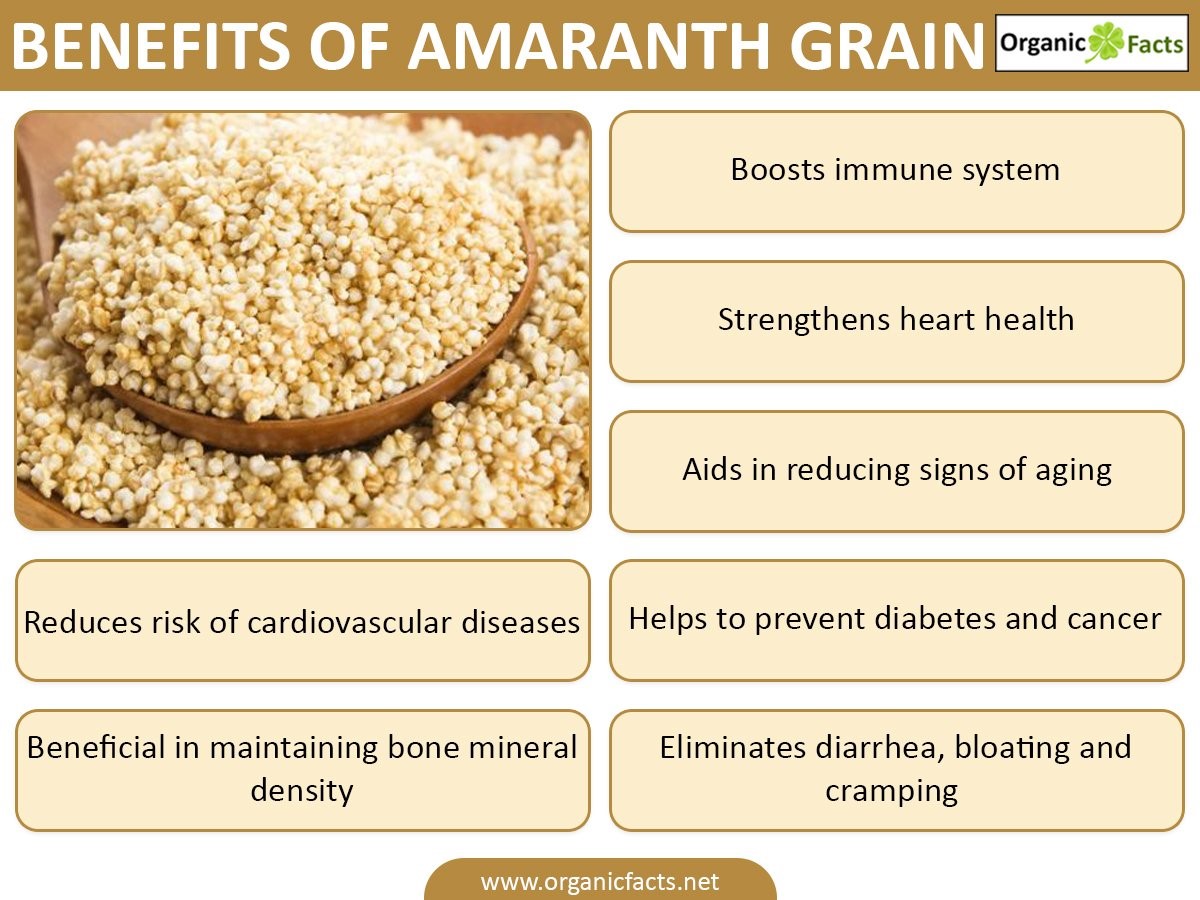