The alfalfa herb is used for kidney conditions, bladder and prostate conditions, and to increase urine flow. It is also used for high cholesterol, asthma, osteoarthritis, rheumatoid arthritis, diabetes, upset stomach, and a bleeding disorder called thrombocytopenic purpura. People also take alfalfa as a source of vitamins A, C, E, and K4; and minerals calcium, potassium, phosphorous, and iron.

Alfalfa can be used for:

Alfalfa is used in alternative medicine to reduce cholesterol and blood pressure. The high concentration of alkaloids in Alfalfa make it useful in reducing blood sugar levels.

It is also commonly used as a blood detoxifier and for any types of arthritis or joint problems. It is a great source of many nutrients and is generally considered safe for children, adults and pregnant/nursing mothers.

The one caution about alfalfa is not to use in combination with blood thinning agents or medications as it is so effective it can interfere or amplify the effects of these.

Studies on alfalfa tea have shown mixed results. For example, according to MedlinePlus, there is insufficient evidence alfalfa is a viable treatment for its traditional uses, as well as a treatment for prostate issues, asthma and diabetes. Smaller studies have indicated that alfalfa seeds can reduce the amount of cholesterol in the body for those with high cholesterol, but more research is required.

A study published in 2012 by the Institute of Soil Science and Plant Cultivation in Poland, however, suggested that preclinical research indicates that alfalfa leaf extract enriched with vitamin C supports the human body in fighting malnutrition, ischemic diseases and various disorders of the digestive tract, as well as supporting and enhancing immunity. Ischemic diseases restrict blood supply to different organs.

There are many health benefits that we can get from alfalfa. Since the 6th century, alfalfa (Medicago sativa) has been used by the Chinese to treat kidney stones, gastrointestinal and bloating. Initially, the world of traditional Chinese medicine often uses Alfalfa leaf, to treat diseases related to the digestive tract. Then developed to help cleanse toxin in the blood or the so-called detoxification and treatment of joint inflammation. While in the treatment of India (Ayurveda) for the treatment of gastrointestinal illness. Alfalfa is also believed to be very beneficial in reducing the symptoms of arthritis.

Alfalfa is included in the legume family. This plant can grow up to one meter and has a small purple flowers. Alfalfa plants have very deep root systems to reach about 4.5 meters. Therefore, the plant is known drought resistant. Believed too, that the root system makes alfalfa can absorb minerals that are not commonly found on the surface of the soil. This makes this plant special so called alfalfa by the Arabs, which means father of plants.

Alfalfa is commonly consumed in the form of sprouts, stems, or dried leaf. Alfalfa food supplements are available in tablet, powder, or tea. In the United states and Australia, young fresh alfalfa leaves are mixed into a salad. In China has been used as an herbal remedy or as a soup mix.

Alfalfa is known as one of the plants with high nutritional content. The content of calcium, chlorophyll, carotene, and vitamin K, which fairly high, making alfalfa as a supplement that is often used for human consumption.

Another advantage alfalfa is rich in vitamins and minerals fairly complete. Vitamins are contained in alfalfa are: vitamin A, thiamine (vitamin B1), riboflavin (vitamin B2), niacin (vitamin B3), vitamin B5, vitamin B6, vitamin C, vitamin K, and folic acid. Mineral seed, namely calcium, iron, magnesium, phosphorus, copper, and zinc.

Alfalfa leaf is a source of chlorophyll, four times higher than ordinary vegetables. There have been many scientific studies done on the efficacy of chlorophyll, such as cleaning the body, forming blood cells, regulating the body's acid-base balance, enhancing durability, as well as the replacement of damaged cells.

Alfalfa is useful to control blood cholesterol by removing bad cholesterol from the body. Alfalfa plant plays a very obvious role in preventing cholesterol levels from reaching all-time highs, it indirectly also plays a role in the reduction of the risks of heart diseases.

It’s effective in eliminating digestive problems that include nausea, stomach ulcers, gastritis and indigestion. This apart, alfalfa can also help improve your appetite.

If you suffer from digestive conditions such as diverticular disease or chronic constipation, alfalfa sprouts may help to ease some of your symptoms. A serving of alfalfa sprouts contains roughly one gram of fibre, which is three percent of an average adult's daily need. Try including alfalfa sprouts in your daily diet to improve your digestive regularity.

Remove toxins from the body

The alfalfa plant is known to possess detoxification properties. This only means that with regular consumption of the plant you will be able to rid your body of toxins that can do more harm than good.

Get rid of alcohol addiction

Reduce the symptoms of menopause

The alfalfa plant contains vitamin K and helps a person who suffers from slow clotting blood.

From time immemorial, the alfalfa plant has been used to provide relief to people suffering from asthma and other such respiratory ailments. The chlorophyll present in the plant also helps wage effective wars against bad breadth.

The alfalfa plant, as hard as it may seem to believe, can provide assistance in the prevention of the occurrence of cancer. This is mostly because of the presence of an amino acid called canavanine in the plant. The plant also has a proven ability to bind carcinogens within the colon.

Alfalfa has been known to be extremely useful in the treatment of anaemia.

The alfalfa plant has beneficial healing properties against bad breath, sore or achy joints, imbalanced skin conditions, and it even increases immune system functionality. When consumed regularly, it acts as an alternative to over the counter pain medicines for headaches or migraines because of its high calcium and magnesium levels. As anyone can see, consuming alfalfa herb on a routine basis has an abundance of positive health results.

Possible side effects of alfalfa.

Can Cause Autoimmune Side Effects

Long-term use of the seeds may cause a condition called systemic lupus erythematosus according to the National Institutes of Health. Symptoms of this autoimmune disorder may include chronic inflammation in the joints causing pain and generalized fatigue. Notify your health care provider with any of these symptoms.

Large doses of alfalfa may increase your sensitivity to sunlight. This would leave a person vulnerable to sunburns and skin irritations. When taking alfalfa with certain medications, the risk of sensitive skin is even greater. A protein substance called canavanine found in alfalfa causes this skin condition. When spending time outside in the sunlight, proper sunblock should be worn. If skin problems develop, seek your health care provider.

Using alfalfa in larger than food amounts is possibly unsafe during pregnancy and breast-feeding. There is some evidence that alfalfa may act like estrogen, and this might affect the pregnancy.

Visit the information page at the top of this listing to view our Advanced Nutrition book in Pageflip or download the PDF.  BE WARNED... it is very large. 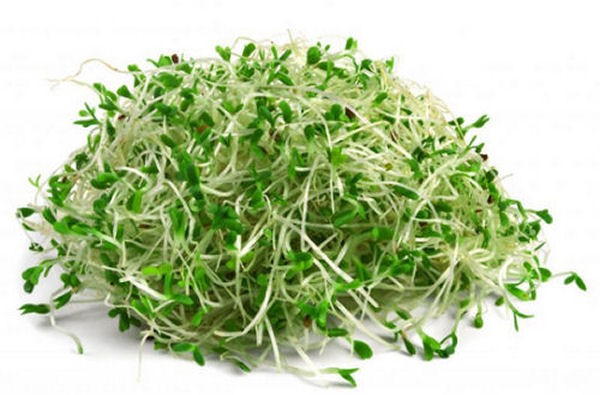