This is our final post on our journey to KZN to film the mini doccie.

If I can impress upon ONE person the extent of the suffering and hardship experienced in the rural areas then I feel I will have succeeded in bringing this matter to light.

Our day began at 3am when everyone rose to either pray or meditate.  Preparations for breakfast begin as soon as each person has taken a turn behind the rondavel or in the bushes to wash from a bowl of water, has used the long-drop and has dressed.

Breakfast is a simple meal of hard boiled eggs and a cup of green tea with ginger and honey or lemon and honey – and for those die-hard coffee addicts a bowl of jungle oats when time permits and cup of “moerkoffie” is readily available in thermal mugs for the trip to the next town where the clinic is to be held.

The countryside’s stark beauty calls to ones spirit however, the harsh reality of the despair on the people’s faces and the abject poverty overrides the beauty.

On the drive through to the clinics in the mornings, the conversations revolve around preparations and who will “man” which station, as it is VITAL that the team works together, smoothly, in order to get through the HUNDREDS of people waiting in queues often in grueling temperatures or in the rain.

After hours of sweaty, hard work, checking people from head to toe and providing them with medicines, the team packs up their vehicles to return to base and prepare for the next day.  Medicines, dressings etc are topped up and the vehicles packed ready for departure at 6am in the mornings.  Personal chores such as making dinner, cleaning dishes and clothes are things that one often wishes could magically happen on their own especially when one is hot, tired and more often than not feeling quite demotivated after having listened to the stories of each person. Whilst feeling a sense of peace for having in some small way helped to improve the quality of life of a person, it is easy to allow thoughts of hopelessness to creep in after having watched helplessly how the sick and aged, the young and the dying are left to deal with their situation….. Unaided!

Then the next morning, the cycle begins all over again.

The picture presented above does not sound too much of a hardship, but believe me there is NOTHING more exhausting in this world watching mothers and tiny baby’s wasting away because they are literally starving to death before your eyes.

Having done this in a different area for a number of years, you wish you could become immune to human suffering… but…. in order not to feel their suffering, one would need to be dead from the neck down and void of all compassion.  Keeping your emotions in check are often hard but one has to.

Most of the young adults have left the rural areas and gone into the nearest city to find work (if they can) and they leave behind their parents and/or grandparents to care for their children, most of whom are illegitimate.  In many cases, the tiny babies and toddlers are left behind with the grandparents or parents because the child’s parents were HIV + and have passed away.

My conversations with G.D revolve around ways in which we as the DAB team could possibly do more to make a bit of a difference in the lives of these FORGOTTEN PEOPLE.

The hopelessness on the faces of the people in the rural areas is a sight that cannot be expressed with mere words and whilst we are all fairly “numbed” to a certain extent, the pain and sheer magnitude of the poverty had me in tears day after day. Silent, slow running tears that ran down my cheeks and formed pools at my feet.  Comfort was offered to me by those for whom I was crying…..

At one of the houses where the young girls have taken responsibility for up to seven or eight toddlers, the DAB team contributed food parcels for two families of about 18 people….

Here time slides in a blur from one day to the next and the only thing that brings one a little peace at night is the gratefulness of knowing that someone’s life TODAY was made a bit better by a visit from the DAB Team.

Dogs thin as rakes – bones in a skin bag….. Bulging eyes – starving to death because the owners have neither the money to spay their animals nor feed them.  It was this picture that prompted the DAB TEAM to take on board new team members on the vetinerary side….

One of the team members drove into town many km’s away and bought the dogs food…. We were sure that it would ease the suffering of the animals TODAY – but what of tomorrow?

Poverty, disease, despair – none of these things are new to us in South Africa, BUT to have to face it day in and out without respite takes guts.

I celebrate my team members who go into the field more often than I and I salute them in their efforts to bring comfort and care to THE FORGOTTEN PEOPLE. 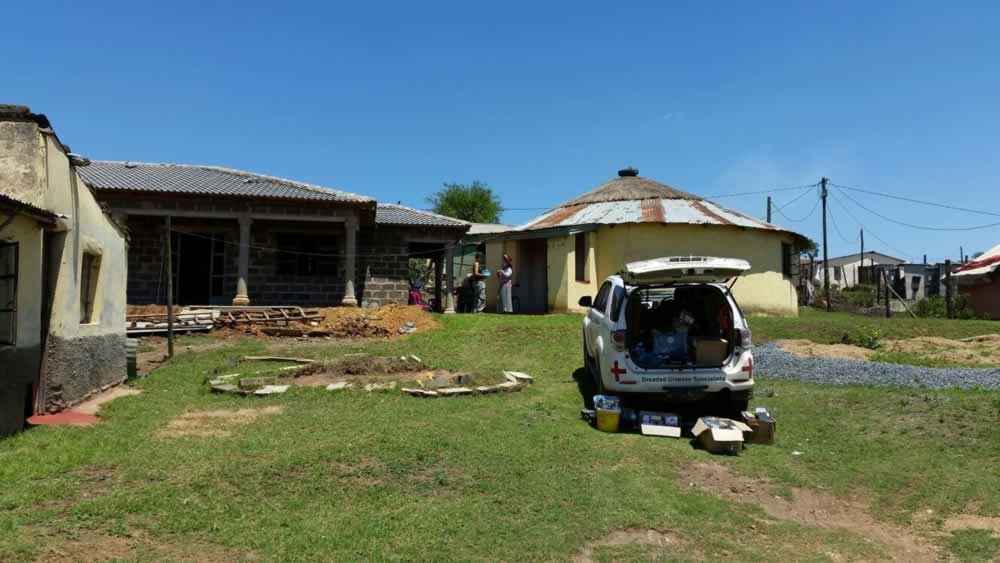