The fly makes its umpteenth turn around my head, excelling and ducking as I slap at it. I miss. And so everyone has their place and mission in this warm harrowed and troubled land full of harshness. The humidity is high, and I cannot blame the flies for endlessly treating the air as pendulum wires.

We sat on the veranda of a café in Maputu's city centre. I look at my closed bottle of cold drink which I ordered, with an “expert eye” now. Here any mistake you make in any avenue of life can be a death sentence and an open bottle can be the difference between life and death.

My eyes wandered around the environment and surroundings, as the hearty greetings subside and the low murmur of our voices fill the air, conveying the latest news over the roar of traffic.

”So you also have beggars and bums”, I remark out loud to no one in particular, but with the hope of catching the ear of the cafe owner, as I may get an answer. The world and people around me have always awakened and inspired my seeking spirit, looking deeper, finding soul and seeing the real person.

”What do you mean," the cafe owner replied, "we do not allow beggars or bums around here."

Pointing, I enquired: ”And that man, trying to fit under the telephone booth as if it is his house?”

Everyone in the group looked to where I indicated. It was a new topic that could lead to an interesting and good discussion and the breathing in the group audibly became softer to follow the new topic of conversation . The person was lying under the small roof of the phone booth about thirty meters away. I felt so sorry for him, as it appeared as if he tried to fit his body into the small space. I wondered what would happen if it started to rain.

While watching him, someone asked if it was not difficult if another person wanted to use the phone?

The cafe owner gave a long deep sigh, and we all observed him closely, because it seemed that a new discussion was to follow. "This is actually a very long story, a deeply sad story, which everyone in the area knows. A story of unbearable pain and sorrow, almost too much for only one man to bear.” He cleared his throat, saying “Same for everyone?” as he stepped into the café. In anticipation we wanted to call him back, but he almost immediately returned with “another round for everyone”, a closed cold drink for me as before. We relaxed back into the story hanging to his lips to catch every word, like the hungry flies around our heads, which we then hardly noticed.

”The man who lies there ... ... no, wait, let me start at the beginning. Then you will understand more and better, giving you the truths of the people involved. " With that he also took a long gulp of his drink and cleared his throat again.

"It is now 2010. About twenty years ago, there was a clever Hindu man who fell in love with a Muslim girl. She was very beautiful. Her beauty and kindness radiated from within and was also shown in how she conducted her daily tasks. She was always friendly and one of the favorites among the young boys, hoping to meet or speak to her. Her laugh sounded like bells, and she was always cheerful. She was from one of the prominent families in the community with hardly a care in the world.”

He moved on his seat to find a more comfortable position on the hard chair, taking a few deep breaths again before continuing his story.

”The young Hindu man also had a lot of friends, jesting and laughter and quips, which were always so beautiful to see. One day the two groups arrived at the same venue together where the young Hindu girl and the young Muslim met. He immediately fell in love with her and Cupido's arrows also struck her. They kept this love for each other secret from the outside world and met each other for weeks in the quiet to talk and laugh together. Those innocent meetings of dreaming and closeness created a very deep love that just kept growing into an inseparable, pure love for each other.”

The cafe owner gave a long sigh and all of us sighed with him. It felt as if we had held our breaths for a long time, breathing shallowly, afraid that breathing too loudly, would disturb the thread of the story, or somehow loose the words.

”With the infatuation growing into love, the two started meeting more openly, sometimes spending whole days together into the early evenings, when they had to return home. Throughout the growing love and shared time of weeks together, the young Hindu man never faltered in his deep respect and love for the girl, so much so, that their friends and community began talking about the pure love for each other that the two shared.”

”As it goes in any fairy-tale, except that this was not a fairy-tale, the parents came to hear of their love. The parents of the young man were unhappy because they were not told of the relationship from the beginning. They told him that this friendship and love was doomed and would only break his heart in the end.”

”The parents of the Muslim girl, however, was not so calm, and there were tremendous arguments and harsh words spoken. Her parents asked her, whether she was unaware of the enormous class difference between the two families. She tried to justify their friendship, trying to save it and have them allow it to exist, but her parents acted without mercy and immediately. They had her locked in the house, packed her belongings and arranged the necessary travel documents. She had no choice and was sent back to their family in Pakistan, where they originally came.”

”Marriages between the two classes was frowned upon and the parents would never allow the shame or disgrace of such a union. The young man however had an opportunity to see his beloved to say farewell, because she refused to travel if she could not say goodbye.”

”When the girl said goodbye to her boyfriend, she whispered in his ear and said to him: ‘Wait at the phone. I will call you as soon as everything is sorted out. We will be reunited.’”

I looked at the others’ faces, and was almost certain that they also wiped the corners of their eyes unnoticed as if to clear a sand grain and I wondered for a moment, how the hardened, forest men, also had small hearts like I do. There was a cough here and there breaking the silence and we took long, loud sips out of our bottles.

”Go on now. Finish the story, we know you love us clinging to each word you speak.”  A voice full of emotion croaked from one of the big, tanned men whilst gripping his bottle very tightly.

”As you know, the telephone booth has been here for longer than twenty years now. The number has been changed and the booth has also been replaced by new equipment several times. This 38 year old man has been waiting at the booth as the only world that exists, guarding it with his life for more than twenty years. Waiting for that promised phone call.”

”4 o’clock in the mornings is the only time when the man will risk leaving the booth for a few minutes.” Resumed the cafe-owner, “Then he visits his family's bakery, where they give him a loaf of bread for the day. His family lives nearby. Through the years they have explained to him that the number has changed, etcetera. They have also said that she might have died already, but he just stares back at them with pity in his eyes and faithfully returns to his place at the booth, keeping his promise to wait for her call at the phone booth that she had pointed out to him.”

Today he is mute, he is emaciated, sick, the mosquitoes feed on him, his clothes are worn, and when it rains, he stays in the wet clothes and becomes very sick. But iin all weather conditions, you will find him at the phone booth. Sitting. Sleeping. Staring. Waiting.

I picked up my cell phone, open the camera function and with a “click” catch the scene filled with so much pain onto my phone, where the man is still waiting for the phone call from his beloved, 20 years later.

This is not fiction. The man lies under the phone booth as you can see. This story touched my heart deeply… I put myself in his shoes, asking what I would have wanted, if I were under a phone booth on my post... I felt the pain in my heart.

We would be so happy to bring an end this painful situation which has become a phone booth nightmare. All he needs and wants, is his phone call, or better, a reunion with his beloved, so that he can become a man who lives again.

Do you know this story, perhaps the young Hindu or his family? Maybe you know who the Muslim girl is, or where we can find her?

Please contact us on the following numbers or email. 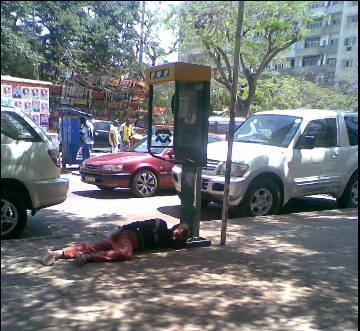